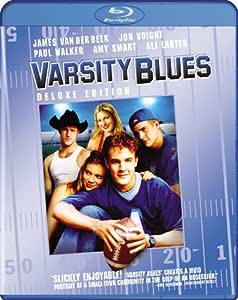 James Van Der Beek (Dawson’s Creek) leads the action in this exciting, funny coming-of-age story about a small-town high schooler confronting the pressures and temptations of gridiron glory. At first, backup quarterback Jonathan “Mox” Moxom (Van Der Beek) is nowhere close to being a football star. He’s perfectly content to stay on the bench and out of the win-at-all-cost strategies of coach Bud Kilmer (Jon Voight in a powerful performance). But when the starting quarterback is injured, Mox is in the game…and in direct conflict with his hotheaded coach and girlfriend. Soon everyone in Mox’s football-crazed community will realize there’s not just a new star quarterback in town, there’s a new kind of hero.

4.7 out of 5 stars
4.7 out of 5
2,415 global ratings
How are ratings calculated?
To calculate the overall star rating and percentage breakdown by star, we don’t use a simple average. Instead, our system considers things like how recent a review is and if the reviewer bought the item on Amazon. It also analyzes reviews to verify trustworthiness.

H. P.
4.0 out of 5 stars Influenced By and Influential On Friday Night Lights in Turn
Reviewed in the United States on November 17, 2018
Verified Purchase
American Pie made a hundred million dollars in 1999, but for those of us living in wide swathes of the country, there was another high school movie that was just as important: Varsity Blues.

It’s interesting to revisit Varsity Blues because it was influenced by Odessa Permian (the original creator admitted as much, although he never admitted any inspiration by Buzz Bissinger’s Friday Night Lights), but it came out before either the Friday Night Lights movie or the show, and I think it wound up influencing both. I think that Bud Kilmer is probably based in part on former Permian coach John Wilkins. I think the show in particular was influenced by Varsity Blues. Plus Landry is in both.

James Van Der Beek, playing the least popular backup quarterback in the history of football, was the star here, flush with Dawson’s Creek success. But he gets overshadowed by . . . pretty much everyone else on the case. Amy Smart. Jon Voight. Paul Walker. Ron Lester. Scott Caan. I do appreciate that Mox dresses like he is an actual high school student in the 1990s (wooooo JNCOs) while everyone else in the movie dresses like they are in a high school movie set in Texas.

One thing that Varsity Blues does better than the movie or even the TV show ever does is convey the sense that these are people who have known each other their entire lives. It is also intensely quotable.

It just has such incredible energy and style and is so much dang fun.

I can’t say it is entirely realistic though. High school football teams hardly ever overthrow their head coach in a coup. And I used to be friends with a stripper who was a kindergarten teacher. She drove three and a half hours to strip, though, which seems a little smarter than stripping in the same small town you teach in.

But it is also a surprisingly deep story. All those high school kids having a gut check minute about who they really are. There is a nice bit of moral peril, too.
“You ‘bout ready to lose that scholarship, boy?”
“If that’s what it takes to keep that needle out of his leg? Absolutely.”

A. M. Shirley
2.0 out of 5 stars Could have been a great movie... Too vulgar for me.
Reviewed in the United States on November 18, 2019
Verified Purchase
An American tradition, in the mind of some. Never saw this movie 'til now. I had no idea there was so much vulgarity. Some reviewers commented that it was a "coming of age" movie. This is partially true, and sad at the same time. It seemed there was a parallel story unfolding of fiction and of reality. The fictional appeal was for our love of Football, and the reality based on the degradation of the morality of our youth, which has ultimately led to the loss of moral fiber and character in our society. It was surreal watching - and understanding - what has pushed this once great people to the place where it is today, self centered, self focused, and weakened sense of moral duty. Even the protagonist is unbelievable in this movie. We know that his generally good decisions was in reality, a farce. In fact, it seemed the director worked to make his somewhat ethical behavior, somewhat unbelievable.

Based on this perspective, a job well done, 5 stars. But if you care about your youth, your children, keep them far and wide from this movie. I gave it 2 stars because you might be able to salvage a dream of rooting for the winning team. I give it 5 stars because it clearly portrays the loss of American dignity. Keep your finger on the mute button! Fast forward through the nudity scenes!
Read more
3 people found this helpful
Helpful
Report abuse

Travis
1.0 out of 5 stars Unauthentic/Pirated Blu Ray
Reviewed in the United States on June 9, 2020
Verified Purchase
The Blu Ray disc I received was not authentic (i.e. pirated; bootleg; fake).

It had a jewel case that was slightly too large and was missing the Blu Ray logo at the top. It was thicker than expected by just a few millimeters, but enough to notice.

The clearest sign of a pirated copy was the the disc. The disc had professional looking printing on the front, but the back made it clear that it was a rewritable Blu Ray copy that anyone could have made at home as you could see the data bands that are visible on rewritable media.

This item was sold through the Prime program as well.
Read more

Anita Lichtenegger
5.0 out of 5 stars Liked the story
Reviewed in the United States on July 8, 2018
Verified Purchase
For some reason, I had never seen this movie. My daughter-in-law posted on facebook she was watching it with an old college friend and how much they were enjoying it, reliving their late teens/early twenties. And remembering the songs in the soundtrack. Bought this on a lark, haven't decided if I will keep it after one viewing, but an enjoyable flick, even though I my music is from the 60's generally. Liked the story! My hometown is almost as football crazy as this Texas school, so the story is believable.
Read more
One person found this helpful
Helpful
Report abuse

Jeanne Tutt
5.0 out of 5 stars A Must Have in Your Collection!
Reviewed in the United States on December 18, 2018
Verified Purchase
One of my high school friends Ron Lester is such a huge part of this movie and this movie was a huge part of his life. The movie did mirror to some extant his high school life. This movie is such a great story and needs to be told. Stand up to those who are toxic in your life. Don't let them make you think you are something less than you truly are!
Read more
One person found this helpful
Helpful
Report abuse
See all reviews

Eve Powell
5.0 out of 5 stars Great Film
Reviewed in the United Kingdom on June 10, 2013
Verified Purchase
I only bought this film because Paul Walker is in it and didn't expect much but really enjoyed the whole film. All of the cast are excellent, the story has good pace and doesn't drag at all. There are funny moments mixed with touching ones. A great film well worth watching.
Read more
3 people found this helpful
Report abuse

Lewis
4.0 out of 5 stars Great film
Reviewed in the United Kingdom on July 2, 2010
Verified Purchase
Great film with some great American football action. Shows the pressure put on young High school sports player by both the communities and colleges. If you like Friday Night Lights etc... you'll love this film.
Read more
One person found this helpful
Report abuse
See all reviews