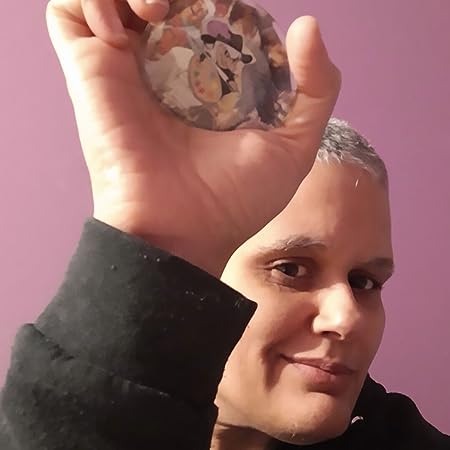 I was raised in Puerto Rico by a mother who encouraged my love of schlock cinema and comic books. When I started college, I wanted to be a Spanish teacher. Instead, I became a model, performer and adventurer. I have pretty much seen and done everything, but I've never stopped making comics. Now, I'm a retired country homemaker who spends far too much time engaging in historical research and doting on my husband.

I am a wild child turned Christian, who vents spooky tendencies by writing creepy stories loosely based on my life experiences and mashed up with research on the fall of the Soviet Union and Russian folklore. Together with my husband, Loki Kaspari, and an awesome team collaborators, we create Velvet Rasputin comics.

If you like thoughtful and twisted humor in the vein of Troma, John Waters, or Rick and Morty, you'll probably dig what I do. 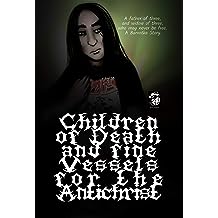 Children of Death and Fine Vessels For The Antichrist: Father of three, widow of three, who may never be free. (Barxotka Book 6) Feb 11, 2021
by Vas Littlecrow Wojtanowicz, Loki Kaspari, Amanda House, Ram Lama
$5.00
Without immediate proof of a biological heir, Camello was posthumously exiled from his village after his murder, along with his surviving bisexual lover, Tsar. Alone, and fearing for his life, Tsar hides in the countryside with the children he's raising. His only hope for survival is a reputed gangster warlock that he once wronged.
Read more
Other Formats: Paperback 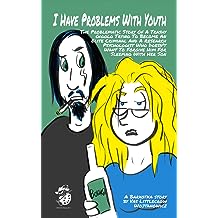 I Have Problems With Youth: The Problematic Story Of A Trashy Gigolo Trying To Become An Elite Criminal And A Research Psychologist Who Doesn't Want To ... For Sleeping With Her Son (Barxotka Book 5) Feb 9, 2021
by Vas Littlecrow Wojtanowicz
$5.00
Karla, a grieving mother and research psychologist, finds a sketchbook revealing the painful truth about the relationship between her late son and his foster father, a former convict by the name of Tsar. Driven by a desire to protect gay children, as well as to understand gay men, and the repressive social dynamics which guides their behavior in Soviet Russia, Karla risks getting sent back to the gulag for her forbidden research work. As a result, she forges an unlikely partnership with her son's abuser. Together, they ride to Siberia on a suicide mission for an elite criminal entrepreneur, as Tsar seeks to escape a life of prostitution, while Karla longs to be reunited with her former research team and her dear friends.
Read more
Other Formats: Paperback 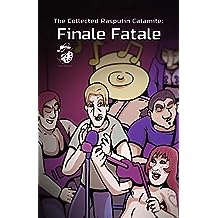 Finale Fatale: The Collected Rasputin Catamite Feb 5, 2021
by Vas Littlecrow Wojtanowicz, Ram Lama, Amanda House, K.M. Claude, Loki Kaspari
$5.00
Lechy, faces great temptation after a sword battle against an all-powerful thunder god, in a bid to become Lord Sodom's greatest apprentice. His rival, Decoy, casts a spell to make dreams come true in the quest to best him. Dima finally finds a cruelty-free way to satisfy his bloodthirst, only to end up living with two vampire fathers who don't approve of his conscience. Ugly Alex has to pass a history exam to get into the National Hockey Academy, but his test anxiety may ruin his chance at sports stardom. The kids go to Moscow to meet with Ugly Alex's arrogant politician dad, and a bunch of famous musicians, before making their concert debut. Without even trying, Lechy encounters a once-in-a-lifetime opportunity to make his ultimate fantasy come true, but it comes at a steep price. Meanwhile, Norm and Principal Ryktheu plot to bring down the abusive Dr. Rodin Manakov once and for all. In the final chapter of Rasputin Catamite, love, corruption and magick in Soviet Russia come to a head.
Read more
Other Formats: Paperback 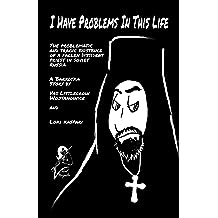 I Have Problems In This Life: The Problematic And Tragic Existence Of A Fallen Dissident Priest In Soviet Russia: A Barxotka Story Jul 3, 2019
by Vas Littlecrow Wojtanowicz, Loki Kaspari, Narphy LaMancha
$4.99
A young and defiant bisexual man joins the Orthodox priesthood in an effort to avoid having an affair with an older married woman. Instead of finding freedom and relief in his spiritual devotion, he gets swept up by a brutal crackdown against the "heretical" Josephite movement. Facing a choice between betraying the players of an anti-Soviet espionage ring, or confessing to false charges of homosexual pedophilia, Sarkos enters a downward spiral towards the corrupt Russian criminal underworld, where government authority and mobsters often blur.

With a visual aesthetic that blends neo-Primitivism with 90's mini-comic photocopier zines, I Have Problems In This Life forces the reader to confront the fact that the ghosts of the Soviet past are still haunting Russia today. This graphic novel purposely takes problematic tropes from antiquated gay prison exploitation media to offer a scathing critique against the systemic oppression of religious dissidents and LGBTQ+ individuals in Russia that exists to this day. 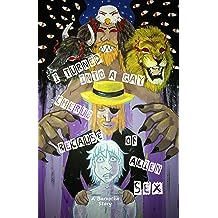 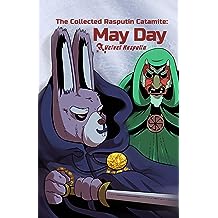 May Day (Rasputin Catamite Book 4) Jun 21, 2017
by Vas Littlecrow Wojtanowicz, Loki Kaspari, Ram Lama, Amanda Wearstler
$5.00
In the latest Rasputin Catamite collection, Lechy takes his fiancee, Masha, out to a greenhouse for little bit of fun in the dark. Wood Goblin, a powerful demonic entity, has other plans as he prepares for a confrontation with an even more diabolical entity, who so happens to wear a bunny suit.

Back at home, Aleksandra, Dima Satan's dead girlfriend, returns to life and visits her friends and family after a two-year disappearance. Chaos comes along with her.

A tentacled spirit guide urges teenage runaway, Sasha, to leave a desolate dreamland where the only ice cream to be had tastes like raw eggs and ashes. In order to survive a drearier reality, Sasha must make a choice between submitting to the whims of a predatory lover, or taking a chance on a friend's crazy plan to get back home.

This compilation includes the following stories from the digital comics of Velvet Rasputin. 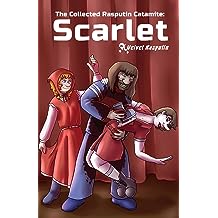 Scarlet (Rasputin Catamite Book 3) Nov 8, 2016
by Vas Littlecrow Wojtanowicz, Loki Kaspari, Ram Lama, Amanda Wearstler
( 1 )
$5.00
It's Irkutusk, Russia in 1988. Alcohol and queerness are illegal, as the Soviet Union is about to collapse. That won't stop teens from being teens, and demons from being terrifying in Rasputin Catamite's Scarlet. This book features the cover art of Amanda "Mandarr" Wearstler, lush interior art by Ram Lama, and the storytelling of Vas Littlecrow Wojtanowicz and Loki Kaspari.

Dima, a monster created to become the perfect hockey player, wages an inner war between his bloodthirsty nature and his humanity. After dabbling with an experiment of illicit lust with two close friends, the emotional turmoil becomes more complicated when jealousy enters the mix. Matters are further complicated when his ex-girlfriend, Zoya, decides to give the cops a piece of her mind.

As the downward spiral of heartbreak, bullying and homicidal rage progresses, another drama takes place. Sasha, a boarding school student, convinces the kindly Principal Ryktheu join him in a risky plan to tell his sister about a painful secret. Together they waltz around foster parent politics, the horrors of the psikhushka, a possible trip to the gulag, and a degenerate creep.

Colorful characters abound in a world where government corruption and everyday life collide. Blood, booze and hormones will flow in this slice-of-life slasher.

* Two-Spirit
* Dressed In Red
* Blood On The Ice
Read more
Other Formats: Paperback 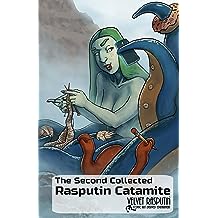 The Second Collected Rasputin Catamite Apr 25, 2016
by Vas Littlecrow Wojtanowicz, Loki Kaspari, Ram Lama, Terrana Cliff
$5.00
The juvenile delinquents of Rasputin Catamite are back in their slice-of-life slasher webcomic compilation. This time around, we meet Lechy's rock star crush as he tries to woo a jaded secretary away from an unappreciative client. What follows is an unlikely romance taking place during an illegal holiday known as Christmas, in a quiet country town where all is not as tranquil at is seems.

Back in Irkutsk, Zoya gets a job as a sexy teenage barmaid, which inspires Dima's jealousy. Sasha finally finds someone who believes him. Lechy juggles a respectable school life, his roguish friends, and an existence full of agony with his legal guardian. Colorfully creepy characters such as a sadistic cult leader in a bunny suit, an adorable vampire hunter who never lets her prey go to waste, and a sassy tentacled shapeshifter inhabit the fringes of a collapsing Soviet Union, as dark secrets about to be revealed.

This book compiles the following eComics: 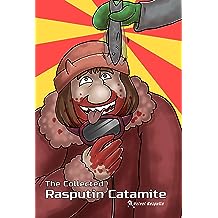 The Collected Rasputin Catamite Mar 27, 2015
by Vas Littlecrow Wojtanowicz, Loki Kaspari, thom Wolfox sR Rhose, Ram Lama, Amanda Wearstler, Studio A.d.H.D
( 2 )
$5.00
In the first compilation of the webcomic, Rasputin Catamite’s uniquely disturbing story and cast take down-to-earth realism and pit it against absolute insanity and blood-soaked violence. Set in the backdrop of a collapsing Soviet Union, this story takes an ridiculous, yet, unflinching look at the racism, sexism, child abuse and institutionalized homophobia, in a supposedly egalitarian society where race, sex and child abuse are not supposed to exist. Rasputin Catamite is a meticulously researched look at Russian counterculture and cultural collapse disguised as puerile humor.

Boredom plagues life in Irkutsk, Siberia, during winter. Yet, outcast punks always find ways to make things interesting. Socially-awkward teenager, Dima Satan and his horrible boyfriend, Ugly Alex, play at concert in an abandoned warehouse for a New Year's Party. Instead of all-night party fun, Dima and Ugly encounter the perils of marauding Neo-Nazi skinheads, a self-mutilating busybody cousin, unexpected lust, and Dima's rather unfortunate vampirism problem. Later in the story, the trio reluctantly team up with Ugly Alex’s creepy cousin, Sasha, to search for their friend Lechy, in the aftermath of the party.
Read more
Other Formats: Paperback 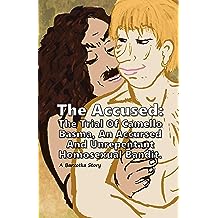 The Accused: The Trial Of Camello Basma, An Accursed And Unrepentant Homosexual Bandit - A Barxotka Story Apr 25, 2013
by Vas Littlecrow Wojtanowicz, Amanda Wearstler
$5.00
Camello the smuggler goes on trial as he faces expulsion from his extremely conservative village for adultery after his wife catches him kissing him another woman. Two other lovers are caught in the crossfire in this dark comedy of sex, politics and prudes.
Read more
Other Formats: Paperback 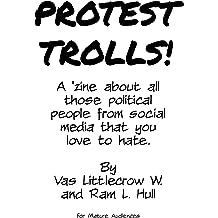 Protest Trolls Jul 14, 2019
by Vas Littlecrow Wojtanowicz, Ram Hull
$1.99
The electronic edition of the paper zine about all those people that you love to have on social media.
Read more 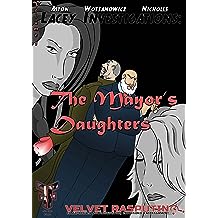 Lacey Investigations: The Mayor's Daughters (Lacey Investigations vs Rasputin Barxotka Book 1) Jan 17, 2016
by Mike Aston, Vas Littlecrow Wojtanowicz
$2.99
April and Serafina are two young girls who share nothing in common, until their lives are shattered by the bloodthirsty whims of organized crime. When suicidal ex-cop Max Kinthorpe receives a call from an old Russian acquaintance, he sets off on a brutal international quest for justice.
Read more