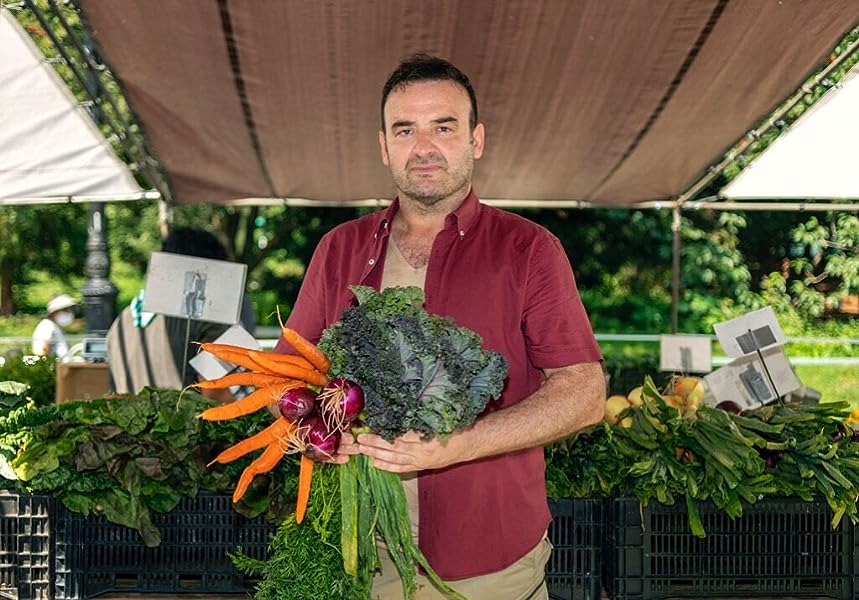 by MURAT ERSOY (Author)
5.0 out of 5 stars 12 ratings
See all formats and editions
Sorry, there was a problem loading this page. Try again.

Vegetarian Turkish cuisine is renowned throughout the world as one of our three greatest cuisines alongside the French and Chinese traditions. From the author and founder of IGA - the Istanbul Gastronomi Atölyesi (Istanbul Gastronomy Workshop) comes this vegetarian appetizer cookbook. Quick and delectable meatless recipes from Turkish culture for the hospitable neighbor and event planner. Though Turkish cuisine has depended on meat products for centuries, traditional Turkish food combines fresh vegetables like eggplant, salads, tomatoes, nuts, fruits, and olive oil. Seasoned with Mediterranean spices and herbs, Vegetarian Turkish cuisine served in these small mezze dishes will liven up every meal and appetizer spread you serve your guests.

Try out these recipes and tell us: what do you think of vegetarian Turkish cuisine?

Born in Istanbul, Turkey, Murat Ersoy is a restaurateur, chef, consultant, and founder of the IGA Istanbul Gastronomi Atölyesi Institute (2008). He has been in the food and beverage business since 1985 and has been cooking professionally for over 36 years, the last 10 years as founding chef, owner, and operator of Kofte Piyaz, a restaurant in Brooklyn, New York. His first job after graduating from high school was at the Istanbul Hilton International, where he trained for a year working in all departments, from the kitchen to tourism and hotel management workshops. He then spent the next 2 years as a manager of the fifteen restaurants in Ataturk Airport, where he managed over 100 people. In 1992, he earned a college diploma from Johnson & Wales University. Murat spent the next 8 years as a food and beverage professional on the Royal Caribbean and Carnival cruise ships, based in the USA. In fact, he has been working in the USA for 19 years as a food and beverage professional. He is a firm believer in the power of wholesome food and simple cuisine to help people toward health and happiness.

5.0 out of 5 stars
5 out of 5
12 global ratings
How customer reviews and ratings work

Amazon Customer
5.0 out of 5 stars Easy delicious recipes!
Reviewed in the United States on October 23, 2021
We found this book while traveling in Brooklyn and met the author Murat Ersoy at his restaurant. Loved the food so much we decided to buy the book. Can't wait to cook some of these wonderful recipes especially the almond pudding!!
Images in this review

Mike
5.0 out of 5 stars Fantastic cookbook
Reviewed in the United States 🇺🇸 on March 20, 2022
Verified Purchase
This is a wonderful cookbook! Instructions and clear and easy to follow, and the photography is delightful. My dishes may not come out as pretty as in the pictures, but working through this has been a delicious experience so far!
Read more
One person found this helpful
Helpful
Report abuse

Andrew Schmidt
5.0 out of 5 stars Simplicity is Everything
Reviewed in the United States 🇺🇸 on April 8, 2022
Verified Purchase
Very polished book with excellent pictures and very much attention paid to simple, easy-to follow instructions. The recipes are delicious as well. Highly recommended.
Read more
One person found this helpful
Helpful
Report abuse

kevin
5.0 out of 5 stars Amazing book !!!!
Reviewed in the United States 🇺🇸 on February 10, 2022
Verified Purchase
I love the recipes in this book and I cook the eggplant dish it was no short of amazing !!!! Can’t wait to try out more dish from this book
Read more
One person found this helpful
Helpful
Report abuse

John & Clara Galazin
5.0 out of 5 stars Fantastic Recipes
Reviewed in the United States 🇺🇸 on October 9, 2021
Verified Purchase
The recipes are fantastic and so well thought out. Simple enough so you don’t have to plan days in advance to make them. The photography is amazing and the book is wonderfully put together with clear and concise instructions for the most creative, delicious meals everyone can make. We have especially enjoyed the Fried Eggplant with Garlic Yogurt and Zucchini Pancake Fritters. Can’t wait to try them all. 100% recommended
Read more
2 people found this helpful
Helpful
Report abuse

david
5.0 out of 5 stars Easy delicious recipes!
Reviewed in the United States 🇺🇸 on October 23, 2021
We found this book while traveling in Brooklyn and met the author Murat Ersoy at his restaurant. Loved the food so much we decided to buy the book. Can't wait to cook some of these wonderful recipes especially the almond pudding!!
Read more

5.0 out of 5 stars Easy delicious recipes!
By david on October 23, 2021
We found this book while traveling in Brooklyn and met the author Murat Ersoy at his restaurant. Loved the food so much we decided to buy the book. Can't wait to cook some of these wonderful recipes especially the almond pudding!!
Images in this review

N.Tanc
5.0 out of 5 stars Delightful
Reviewed in the United States 🇺🇸 on September 16, 2021
Wide variety of diverse dishes that are presented clearly. Excellent for those seeking to expand vegetarian repertoire!
Read more
3 people found this helpful
Helpful
Report abuse
See all reviews