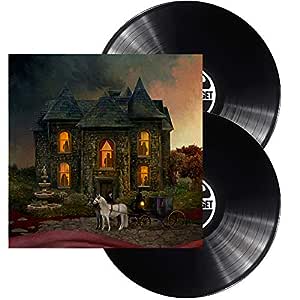 Thirteenth studio album by the Swedish progressive metallers. 'In Cauda Venenum' was recorded in 2018 at Stockholm's Park Studio.

4.7 out of 5 stars
4.7 out of 5
359 global ratings
How are ratings calculated?
To calculate the overall star rating and percentage breakdown by star, we don’t use a simple average. Instead, our system considers things like how recent a review is and if the reviewer bought the item on Amazon. It also analyzes reviews to verify trustworthiness.

Izzymarco2
5.0 out of 5 stars Excellent album from a near perfect band!
Reviewed in the United States on December 23, 2019
Verified Purchase
I've been in Opeth fan since their first album and every album after Orchid. As a hardcore fan I feel like I have changed with the band also, and I have always enjoyed their artistic creativity and willingness to explore and invent. All the musicians are top tier and they never release anything imo that is less than fantastic! This album is the first one they've released in their native tongue (as well as in English) and I found it to be satisfying hearing the lyrics in Swedish.
Mikael's voice is as strong and clean as it's ever been, and the individual musicianship is stellar, all of which I've come to expect from a band this accomplished. Fred's guitar work is his usual wizardry, while I find it difficult to believe there are many drummers out there with the jaw-dropping abilities Axe has. I love his earthy approach.. reminds me a lot of badass Bill Bruford in his Crimso days.
And of course Mike's dedication and love for music is constantly evident in his own playing. He is a phenomenal guitarist who is constantly pushing the boundaries of so-called "conventional sound in music."
The result with this release is another complicated [musically] album that is both beautiful and dark, with no stone left unturned. Hard to find a better band than the mighty Opeth!!

Susannah Gravel
1.0 out of 5 stars Received Different Product
Reviewed in the United States on November 14, 2019
Verified Purchase
The records I was sent were pure black. The photo had a different record pictured with graphics on it.
Read more

McKlaatu
5.0 out of 5 stars Do not be mislead by so called 'experts' and their reviews
Reviewed in the United States on January 12, 2020
Verified Purchase
What a album !! That first review putting it down, well, good I didn't listen. It is wonderful prog album !! This is what I was expecting to listen in the Prog realm. Wow... Recommended.
Read more
One person found this helpful
Helpful
Comment Report abuse
See all reviews

CS100
4.0 out of 5 stars What's he singing about?
Reviewed in the United Kingdom on October 10, 2019
Verified Purchase
Opeth have had an interesting musical trajectory, from growly death metal with indecipherable vocals, to clean singing in English, to this album sung in Swedish so once again you can't understand it. This edition comes with an English version as well but frankly lyrics are hardly the band's strong-point so I think I'll be sticking with the Swedish as it makes it a more unique experience.

Musically we get more of the same as their later albums - Symphonic structures incorporating technically skilled playing, ranging across keyboards, acoustic guitars, with the odd burst of BIG METAL GUITARS!!! In a way, it reminds me of the first couple of Rainbow albums, which is no bad thing. I like Opeth's later work a lot more than the early stuff.

Overall a solid & enjoyable album, but nothing exceptional, so 4 stars.

Ramses
5.0 out of 5 stars perfect, also the Swedish side
Reviewed in the United Kingdom on November 15, 2019
Verified Purchase
I have the 2 CD version, one Englsih and one Swedish. I really recommend that because they are not carbon copies, rather different angles on the same songs. Now the latter are absolutely amazing. Opeth veered from the dark speed metal from the early days a few albums ago (although they still do most of that in the concerts I have seen), and for me it is all for the better. This one will take time to digest but a priori it is certainly in my favourite Opeth albums. Mikael is in top shape, the band too, lyrics great, and the music heavy, melodic albeit brooding in places, really typical good Opeth stuff. I LOVE IT.
Read more
3 people found this helpful
Report abuse

D. Batch
5.0 out of 5 stars New convert
Reviewed in the United Kingdom on January 2, 2020
Verified Purchase
Thought I’d take a punt on this album following suggestions from a couple of mates who are huge Opeth fans, me myself having never heard them before.

I was not disappointed , likely album of the year for me 2019. Beautifully paced, first class musicianship, and the additional Swedish version disc is a real bonus given its in the bands native tongue.

T. J. May
4.0 out of 5 stars Love the music, but a nasty digial glitch in surround mix.
Reviewed in the United Kingdom on October 9, 2019
Verified Purchase
OK, so I don't get bombed with negative comments. PLEASE KNOW - I LOVE the new Opeth - In Cauda Veneum!

But the surround mix has a huge digital error. The glitch is there between 9. Continuum / 10. All Things Will Pass. It doesn't do it on the stereo mix / CD's, just the Surround mix. As the drums continue from the end of Continuum, into All Things Will Pass, there's a glitch / stop for a moment, obnoxious interference in the wonderful transition.

Not that I'm an expert engineer, but I have done a lot of mastering, and it sounds like the "marker" between the two songs hasn't been programmed to be silent.

Anyone else here have this issue with the surround mix (which overall is quite good!)?
Read more
One person found this helpful
Report abuse
See all reviews