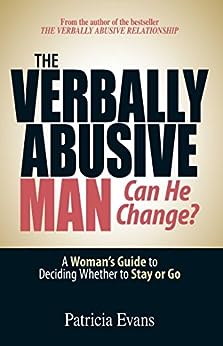 The Verbally Abusive Man - Can He Change?: A Woman's Guide to Deciding Whether to Stay or Go Kindle Edition

by Patricia Evans (Author) Format: Kindle Edition
See all formats and editions
Sorry, there was a problem loading this page. Try again.
From the world’s most acclaimed expert on verbal abuse comes the first book that answers the question foremost in every woman’s mind: can he really change?

Combining practical applications with the latest clinical research with the trademark support and assurance of Evans, The Verbally Abusive Man: Can He change? shows victims of verbal abuse how to empower themselves, improve their relationships, and change their lives for the better.
Read more
Previous page
Next page

Patricia Evans is the bestselling author of four books, including The Verbally Abusive Relationship, Verbal Abuse Survivors Speak Out, Controlling People, and The Verbally Abusive Man: Can He Change? A highly acclaimed interpersonal communications specialist, public speaker, and consultant, Evans has appeared on Oprah, CNN, national radio, and in Newsweek and O, The Oprah Magazine. Evans lives in the San Francisco Bay Area and can be reached via her website at VerbalAbuse.com.

Patricia Evans is the bestselling author of five books, including The Verbally Abusive Relationship, Verbal Abuse Survivors Speak Out, Controlling People, The Verbally Abusive Man: Can He Change? and Victory Over Verbal Abuse. She has appeared on Oprah, CNN, national radio, and in Newsweek and O, The Oprah Magazine. She has spoken to groups throughout the US, Canada, Madrid at the "Commission for the Investigation of Violence Against Women" and in five cities in Australia. Patricia lives in the San Francisco Bay Area and can be reached via her website at www.VerbalAbuse.com.

Wanda
5.0 out of 5 stars Incredibly Insightful
Reviewed in the United States 🇺🇸 on November 14, 2009
Verified Purchase
I read this book after leaving my husband (and about 6 months after reading Patricia's first book, The Verbally Abusive Relationship). I found both books incredibly helpful in their own way - the first book in explaining the different types of things covert verbal abusers do (many of my x-husband's behaviors upset me but it wasn't until I read that book that I finally really saw the overall pattern and fully understood how soul destroying his abuse was). She also explains the behaviors of overt verbal abusers (what most people have come to associate with the words 'verbal abuse' - name calling, yelling, threatening, etc.).

That information gave me the insight I needed to leave my marriage. What I personally couldn't understand from the first book, however, was Patricia's explanation as to why abusers do what they do and what my relationship with my husband was really about. This newer book explained that so clearly I cried for days. I found that it was essential knowledge for me in being able to let go. After all of her years of counseling both abusers and the abused, Patricia seems to really understand the thoughts and emotions behind abusive behavior. After reading this book I came away feeling more empathy for, but also more detachment from, my x-husband. It also gave me valuable insight into how damaging the relationship had really been for me.

Personally, I would recommend first reading the The Verbally Abusive Relationship before reading this book as I think it provides important background information for this book. One thing I found interesting is that in the first book Patricia listed out 16 traits she commonly found in verbally abused women. In this book she listed one - that the victim feels "irreparably flawed." I thought that was a perfect description of how I had come to feel and her book explained why I felt that way about myself. The other insight I found extremely helpful is that she doesn't recommend couple's counseling - she has found that the abusers end up manipulating the counselor into blaming the victim and it ends up empowering the abuser. After reading her explanation, I couldn't agree more.

This book provides wonderful advice for how an abuser can recover IF (the big if) they want to. Mostly however I think this is valuable for verbally abused women to better understand what is really behind the abuse and what their relationship is really about.
Read more
160 people found this helpful
Helpful
Report abuse

Ladyhawk
3.0 out of 5 stars Good follow-up to the first book
Reviewed in the United States 🇺🇸 on January 24, 2013
Verified Purchase
The Verbally Abusive Man, Can He Change?: A Woman's Guide to Deciding Whether to Stay or Go
This book by Patricia Evans is a welcome follow-up to her previous book, The Verbally Abusive Relationship, in which she defines verbal abuse in all its many manifestations, gives examples, and explains why certain behaviors are abusive. I have reread the first book numerous times over about ten years, always finding more insight into my husband's behavior toward me. Long periods would go by when I thought things were getting better, but I kept going back to that book in deep distress over what to do and how to understand why I felt so deeply unhappy most of the time.
This book is a useful expansion of that description and also provides some concrete and practical advice on how to determine your own mate's problem and how to approach an attempt to stop the abuse and effect real change in him. Clearly many, if not most, men will not change, but if you want to try, here is where you will find help.
My biggest disappointment with this book is the author's explanations for why a man engages in certain kinds of abuse. I understand that he abuses me because I do not match his ideal of the perfect woman for him, but I found it very distracting that the author uses the same phrase over and over, namely "He can't find his dream woman" as the reason he is angry and gets abusive. I feel strongly that the truth is that I am misbehaving in his mind; I am identified as his ideal woman, but when I do not behave as this ideal woman should, I am punished for it with some form of abuse. The constant use of the term "his dream woman" ironically disconnected me from the woman I am, ie his real spouse but the imperfect one. For example, she writes "If he puts you down, there is more room in your body for his dream woman". It conjures up a nut case who is in some alternate universe where women are shape-shifters. It distracts from my reality with him, which is that he is trying to control my behavior to fit some abstract ideal. I get what she is saying and there is truth to it, but her dependence on that phrase was repetitive, unenlightening and annoying.
Read more
41 people found this helpful
Helpful
Report abuse

Arwythur
5.0 out of 5 stars Must have for anyone dealing with this type of situation
Reviewed in the United States 🇺🇸 on March 21, 2014
Verified Purchase
This review is for all of her books, I personally have purchased several complete sets, and given them to women who are dealing with these types of issues and bad relationships. Each and every person that I have made read these as part of their therapy have found themselves more than once inside the pages. When a book or books, will bring tears, and anger enough to throw them across a room, but then to go and pick it up and continue reading... then you have found a good tool for learning the "How's and Why's" of very bad situations. The only downside isn't in the books, they are straight forward and honest, it's the people who will go and read them, admit and say they understand, and turn around and walk back into the situation, back into Plato's Cave... Education... revelation... insight... only works if you are willing to set aside the comfort of the known, to embrace the unknown and potentially better life without the abuser. I can not tell you that the world will be better if you read these books, but... I can tell you that the world will be better if you not only give up the bad, but stop repeating the cycles by finding another abuser, just because you "understand the rules" To understand why a Man is like this, (yes, there are abusive women as well), is to take away their power to hurt and manipulate you. Buy it, read it, give a copy to a firend.
Read more
9 people found this helpful
Helpful
Report abuse
See all reviews

helent
5.0 out of 5 stars I wish I'd read this book years ago
Reviewed in the United Kingdom 🇬🇧 on October 14, 2014
Verified Purchase
I read this book and -after reading other reviews where people said that they felt like the book was about them - had to agree with them. Whilst some of the key points are a little repetitive this helps to hammer home the message of what constitutes abuse and how you can respond to it. I can't recommend it enough.
Read more
2 people found this helpful
Report abuse

mookie
4.0 out of 5 stars interesting read
Reviewed in the United Kingdom 🇬🇧 on January 3, 2013
Verified Purchase
does shed some light but not sure if i felt comfortable with the view that the abusive man see's a mirage image, of
himself in his partner threfore expects same insight and views as he would hold. can see how it could explain some off
the distrubed behaviour and thought processes. I feel still that the "intellegent abuser" knows full well what he is doing,
Read more
4 people found this helpful
Report abuse

Amazon Customer
5.0 out of 5 stars Marge
Reviewed in the United Kingdom 🇬🇧 on October 30, 2016
Verified Purchase
An excellent book,it helped me to understand and recognise verbal abuse in my relationship.
Read more
2 people found this helpful
Report abuse