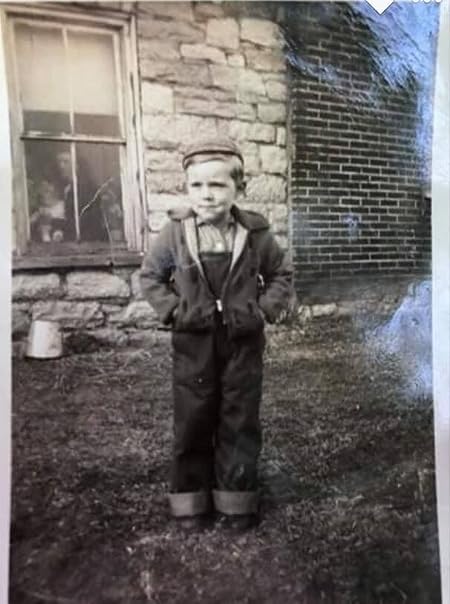 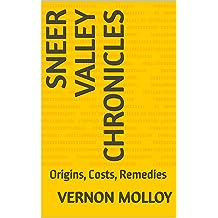 I have set out several challenges to common-sense notions in this book, without spending much time situating them in philosophical, economic or political traditions.

There are two reasons: The first is that I hope to relate these challenges to urgent problems and time is of the essence. Academics and public intellectuals tend to tackle problems from the outside in or the top down. This ‘one problem at a time’ approach leaves most issues unaddressed, exhausts attention spans and leaves audiences alarmed and in despair.

The second reason is more important. Human beings cannot transfer ideas or understandings as packets of information. All we can do is share travel experiences that led us to some insight. Such maps may improve the chances of others coming to similar insights. These insights will be unique, worth sharing and a path to engagement.

Another strategy is to describe the way private insights might be therapeutic with regards to overarching problems. All of our big problems emerged out of human beings acting in unison. Repairs must be similarly constituted.

Thus, the global nature of problems becomes a conversational asset. Challenges to what we have been getting up to do not have to be repeated; and they could be footnoted as new insights occur in readers and other audiences.

In 2006, Al Gore screened An Inconvenient Truth to wide audiences and good reviews. The ideas he and others have brought to public attention over many centuries have not rooted up. The challenges and communication strategies sketched in Sneer Valley could help such conversations flourish. 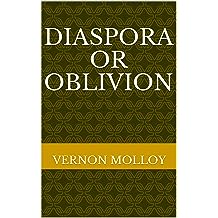 Diaspora or Oblivion May 3, 2021
by Vernon Molloy
$2.00
Everything we are aware of has already happened. Everything we think of as facts are predictions.
The solidity of chairs is a prediction about what will happen if we sit on them. The fact that they rarely let us down is reassuring but not a basis for realism.
This is important because our sense of being alive is all about the space between glimpses of what just happened and predictions about what these glimpses portend.
This is one reason I hope to persuade you that we need a diaspora from urban circumstances. Our glimpses of what just happened are becoming too narrow to sustain a sense of ourselves and one another.
There are political and economic benefits to be gleaned as well. Most of this book deals with them.
However, these benefits are trivial compared to not subsiding into primitive lives, no matter how well-appointed they become.
Read more 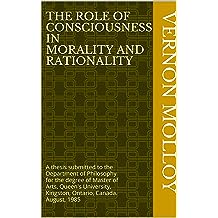 THE ROLE OF CONSCIOUSNESS IN MORALITY AND RATIONALITY: A thesis submitted to the Department of Philosophy for the degree of Master of Arts, Queen's University, Kingston, Ontario, Canada. August, 1985 Feb 9, 2020
by Vernon Molloy
$2.00
This book argues that an important error has occurred in human understanding. For thousands of years consciousness has been regarded as the core of agency and responsibility. I suggest a few economic and political consequences and examine logical problems attending consciousness = agency claims.
This is not an irrelevant philosophical exercise. The difficulty of talking intelligibly about the ontological status of things and “arrangements of things" challenges the consciousness = agency claim.
As well, the magisterial notions of top-down agent-hood this claim encourages are having increasingly obvious moral and existential implications.
Read more 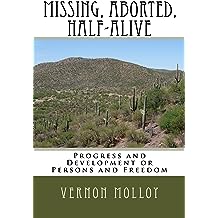 Missing, Aborted, Half-Alive: Progress and Development or Persons and Freedom Feb 3, 2018
by Vernon Molloy
$2.00
Everywhere one looks, the world is heating up, possibilities are exploding or shrinking and people are turning away from one another.
A way to respond is to reduce dreadful certainties paralyzing adults into resignation, complacency, arrogance or despair. This is where I hope to be of service. I hope to share my understanding of the dubious nature of many commonsense beliefs. My suggestions will not replace present understandings with new certainties, but with more or less playful doubts.
In other words, I hope to return people to the state of curiosity and excitement they enjoyed when they were children.
I hope to make as many as possible philosophers again!
I also hope that we pay this favour forward to people we know. They may not like it much, but skepticism is delightful once you get the hang of it; and there is no reason it might not become contagious.
This is worth doing for another reason. Human beings need chain-letter explosions of mischief, spreading as far as possible and as rapidly as possible. We need to become as difficult to herd as free range chickens. We certainly need to stop being herd animals.
That’s all I’ve got: nothing but questions, possibilities and mischief. We need to put frowns on as many bright, beautiful and wealthy brows as possible.
There is no reason for anyone else to feel threatened, no reason to not share the excitement.
If enough of us do this, a wonderful future remains possible.
Read more
Other Formats: Paperback 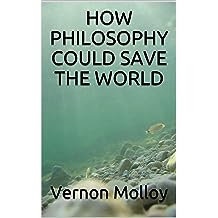 HOW PHILOSOPHY COULD SAVE THE WORLD Feb 19, 2016
by Vernon Molloy
$2.00
A few thousand years ago, I'm sure the world seemed much younger.
I think hardly anything going on today is as exciting as being alive when understanding and awareness were starting up.

In those 'good old days', information was hard to come by and every person represented a socializing opportunity. The result was that human beings remained curious and questioning their whole lives.
Cultural accomplishments – languages, oral traditions – had accumulated sufficiently that big-picture issues could be talked about. They had not mounted so high that nothing remained to discuss.

We know this because these small populations generated the cosmologies and myths now regarded as common-sense and realism.

In those days, people had the world for their oyster. Would-be philosophers rambled around muttering to themselves and buttonholing anyone who would listen. The resulting conversations spawned the sciences, mathematics and the arts. They planted the seeds that would grow into corporations, nations and the modern world.

Ironically, these successes diminished the sense of wonder that made them possible. After deputizing scientists and artists to do the heavy-lifting, philosophy shrivelled into an arcane activity practiced by a few people in broom closets and universities.

Philosophers continued sharpening logical tools, muttering that such skills will be welcome soon enough. They continued pondering moral and epistemological questions no one else cared about. Not noticing their emeritus status, philosophers soldiered on, hoping to corral even one eminent truth and would repair their reputation.

This cannot happen. Philosophical standpoints define what count as truth. Such benchmarks cannot be tested to determine whether they are correctly situated.

This stalemate is actually an enormous accomplishment. No epiphanies, only increasingly subtle questions. 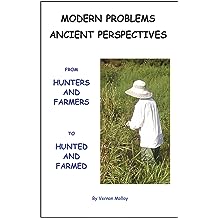 Modern Problems, Ancient Perspectives: From Hunters and Gatherers to Hunted and Gathered Oct 16, 2015
by Vernon Molloy
$2.00
A few thousand years ago the world seemed much younger.
Hardly anything was as exciting as being alive and wondering what it all meant.
In those 'good old days', information and socializing opportunities were hard to come by. The result was that many human beings remained curious and questioning their whole lives.
Cultural accomplishments – languages, oral traditions – had accumulated sufficiently that big-picture issues could be talked about. They had not, however, mounted so high that nothing remained to discuss.
We know this because these small populations generated the cosmologies and myths now regarded as common-sense and realism.
In those days – celebrated in Western nations as Hellenism, the pre-Socratic era, Plato and Aristotle – people had the world for their oyster. Philosophers rambled around buttonholing anyone who would talk to them. The resulting conversations spawned the sciences, mathematics and the arts. They planted seeds that would grow into corporations, nations and the modern world.
----
Ironically, these successes diminished the sense of wonder that made them possible. After deputizing scientists and artists to do the heavy-lifting, philosophy shrivelled into an arcane activity practiced in broom closets and remote corners of universities.
To be sure, philosophers continued sharpening logical tools, muttering that they would be welcome soon enough. They continued to ponder moral and epistemological questions no one else cared about. Not noticing their emeritus status, philosophers soldiered on, hoping to corral some eminent truth that would repair their reputation.
This has not-and cannot-happen. Philosophical standpoints define what count as truth. They cannot be tested to determine whether they are correctly situated although they can be supplanted.
The idea that they could 'progress' is equally oxymoronic. Every 'candidate insight' triggers an internecine feeding frenzy. Philosophers instinctively attempt to overturn – or at least improve – every point of view they come across.
Since they lack anything like Large Hadron Colliders to objectively investigate perplexing questions, mutual sniping is the their only tool.
The result is that all the important questions remain on the table.
----
This is not failure but an enormous accomplishment. In the meantime, important insights have been achieved. John Rawls' theory of justice and Immanuel Kant's universalizability test come to mind. Ludwig Wittgenstein discarded the youthful cosmology that earned him a doctorate at Cambridge University to challenge commonsense notions in ways philosophers still mine for insights.
No epiphanies however, only increasingly subtle questions.
What's valuable about not 'being able' to come to conclusions? Politicians, corporations, nations ... have no difficulty coming to and acting upon precipitate or dogmatic conclusions. They harvest resources recklessly. They ride rough-shod across everything. I think this means wars, global warming, global poverty... reflect philosophers' historical failures to challenge, indict, publicize, excoriate... their half-witted, doubt-free progeny.
This is my hope for Modern Problems, Ancient Perspectives .... The political, economic and psychological mischief traceable to the primitive cosmologies embedded in the sciences, commonsense and religions dramatize the consequences of failed skepticism. Skepticism is what philosophers are good at. Tthey kept one another scoreless for thousands of years!
This skepticism must be expanded. A new generation of philosophers is needed to restore curiosity and optimism to the world – and perhaps save it in the bargain!