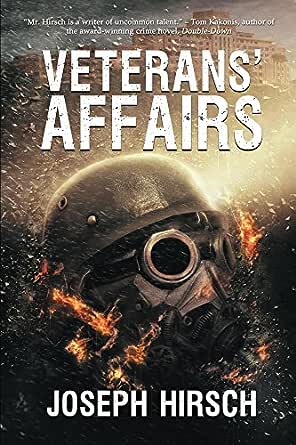 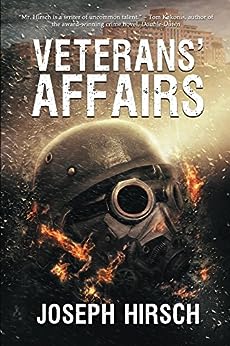 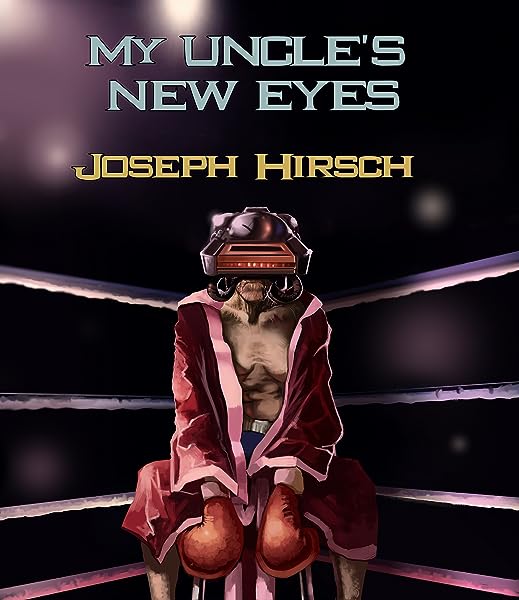 "I'm not sure what happened to Joey Hirsch to make his writing so bizarre, but I suspect the US Government had something to do with it. Regardless, it's to the reader's benefit: his new book Veterans Affairs is as funny as it is strange: it's like G.I Joe meets Casper the Friendly Ghost, only if Casper was no longer so friendly, due to war-related PTSD." - Fiona Helmsley, author of My Body would be the kindest of Strangers

"In prose carved with a knife, Hirsch has written the novel all of us fear: the truth of war, whether it's pretty or not, whether we like it or not. In Veteran's Affairs, faced with ghosts and his own inadequacy in the face of the horrors of war, Joey Sullivan must struggle through the traumas of others before he can face his own. We owe it to ourselves to read his story."
-Rusty Barnes, author of Reckoning

If you can imagine George Saunders reinvisioning Going after Cacciato after repeatedly watching Jacob's Ladder, then you have some idea of the phantasmagoric ride you're in for while reading Veterans' Affairs. You'd need to have Tim O'Brien ghosting around still, and maybe you'd want to build a catbird seat for Kurt Vonnegut and Kenzaburo Oe as well. Only then can Tom Robbins show up to dose everyone. Now you're ready. From its Voltairean narrator, Joseph Sullivan, to its realistically drawn (and wounded and querulous and sympathetic) hospitalized veterans, Thigpen and Jones, Joseph Hirsch's novel embraces the obscene facts of the human body, both at love and at war, let loose through the horrors of life--and the afterlife. Among the many emotionally demanding, prize-winning novels and story collections now emerging from our recent wars, Veterans' Affairs will occupy a singular, necessary place.
-John Joseph Ryan, author of A Bullet Apiece

"A captivating and poignant story of an anguished soldier and the gossamer thread that anchors human sanity." L.E. Fraser, Author of Skully, Perdition Games.

"Veterans' Affairs creates an authentic-feeling struggle of a damaged veteran trying to come back to life, and then takes that familiar type of story into a wondrously uncanny new dimension. It solidly grounds the reader, but also thrusts them into the unknown. Gratifying to read even when unpleasant, it gets a grip and hangs on ruthlessly.'"
-    David S. Atkinson, author of Not Quite so Stories, The Garden of Good and Evil Pancakes, and Bones Buried in the Dirt
--This text refers to the paperback edition.

3.7 out of 5 stars
3.7 out of 5
31 customer ratings
How does Amazon calculate star ratings?
Amazon calculates a product’s star ratings based on a machine learned model instead of a raw data average. The model takes into account factors including the age of a rating, whether the ratings are from verified purchasers, and factors that establish reviewer trustworthiness.
Top Reviews

Cheryl Stout
TOP 500 REVIEWER
5.0 out of 5 stars Joey Sullivan, RN...with a multitude of problems
Reviewed in the United States on June 4, 2016
Verified Purchase
Joey Sullivan fought in Iraq and was sent home with a mild TBI (traumatic brain injury) after a bomb exploded near him and killed a friend of his.

After he got tired sitting around getting disability benefits, he went to school and became a Registered Nurse.

He's an average guy, overweight, on a multitude of painkillers, tranquilizers and more and he loves his dog Tiffany.

He now works at the VA hospital and starts being haunted by other veteran's war experiences...and the haunting will continue unless he helps them finish tasks that tie back into their war experiences.

I loved this book and the character of Joey. This is definitely a crazy, mixed-up look at returning vets, PTSD, and all the horrors they have gone through on the battlefields.

Gruesome in spots but it definitely felt possible. If you are shocked easily, this might not be the tale for you. But if you want to read about war, paranormal experiences, or just read a wacky good book, try this one out.

Oh, and the way the book ended, this might be the first in a series.

Adam Mahler
4.0 out of 5 stars Interesting idea
Reviewed in the United States on March 30, 2019
Verified Purchase
I enjoyed this book. The premise is interesting and unusual. I could tell a lot of thought went into the characters and their personalities.
Read more
One person found this helpful
Helpful
Comment Report abuse

Ann Wierwille
5.0 out of 5 stars However I've always liked Hirsch's books
Reviewed in the United States on June 14, 2016
Verified Purchase
I usually don't take to books about war or ptsd. However I've always liked Hirsch's books, so I gave this a try. He's a wonderful writer who captures characters and situations that make it all seem real. I was good with the war scenes in spite of my aversion, because he makes it human. When I was young, I read some Mailer. Hirsch reminds me of same in the "you were there" sense. Hirsch has a wide range so I look forward to the next one.
Read more
2 people found this helpful
Helpful
Comment Report abuse

jake
5.0 out of 5 stars Great book!
Reviewed in the United States on December 13, 2016
Verified Purchase
Amazing book! This is one of the best books I've ever read. It's got so much detail and is such a page turner. It's got an awesome story line and I personally got attached to a few of these characters. I recommend it to absolutely anyone that's looking for a good read. I would definitely read it again
Read more
One person found this helpful
Helpful
Comment Report abuse

Diane
4.0 out of 5 stars Veterans affairs
Reviewed in the United States on September 21, 2016
Verified Purchase
Good read but like a roller coaster ride ups and downs and a bit of going in circles. Confusing at times
Read more
2 people found this helpful
Helpful
Comment Report abuse

WRusty
5.0 out of 5 stars I really enjoyed this book!
Reviewed in the United States on June 26, 2016
Verified Purchase
When I read these stories, the characters come to life for me. I call that a great book. Hope others that follow will agree.....
Read more
2 people found this helpful
Helpful
Comment Report abuse

Brksndunngirl
5.0 out of 5 stars Good read
Reviewed in the United States on November 12, 2016
Verified Purchase
The storyline was fresh and it made me feel as if I could understand what he went through. I'd recommend this book.
Read more
2 people found this helpful
Helpful
Comment Report abuse
See all reviews from the United States

L.E. Fraser
5.0 out of 5 stars A captivating and poignant story of an anguished soldier
Reviewed in Canada on May 5, 2016
Verified Purchase
“War may be hell, but things only get worse when you get home.” That sums up the ride that readers will take alongside Hirsch's protagonist.

Joey Sullivan returns from Iraq wounded in body and soul. Struggling with PTSD and chronic pain, he defers suicide when he secures a RN position at the Cincinnati VA Medical Center. But his traumatic brain injury has created a conduit for dead soldiers from past wars to communicate to him. And they have unfinished business. Until Joey agrees to their terms, the ghosts force him to suffer their battle degradations first hand.

The opening line of the novel sets up Joey’s conflict, and the story flows to his final decision. This novel crosses into the psychological thriller genre, as it depends upon the reader’s outlook how to interpret the events that unravel. Is it supernatural or is it a glimpse into the distorted reality of a disturbed mind?

Written first person through the eyes of Joey, the informal writing produces a strong connection to the protagonist and his tribulations. His dog, Tiffany, deftly creates a layer of complexity to Joey’s character that supports the plot.

One of Hirsch’s strengths as a writer is his ability to paint a three-dimensional setting. From the streets of Cincinnati to the horror of a Japanese POW camp to the sweltering jungles of Viet Nam, this book doesn’t disappoint. Some of the scenes are sexually and violently graphic, which is a necessary stylist choice to depict the terrors that live in Joey’s mind. If profanity and distressing images upset you, give it a pass. Visiting disturbed minds is a fondness of mine, and I enjoyed Hirsch’s newest offering.

A captivating and poignant story of an anguished soldier and the gossamer thread that anchors human sanity.
Read more
Helpful
Sending feedback...
Thank you for your feedback.
Sorry, we failed to record your vote. Please try again
Report abuse