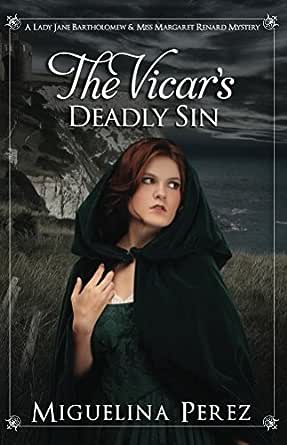 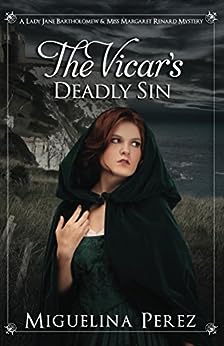 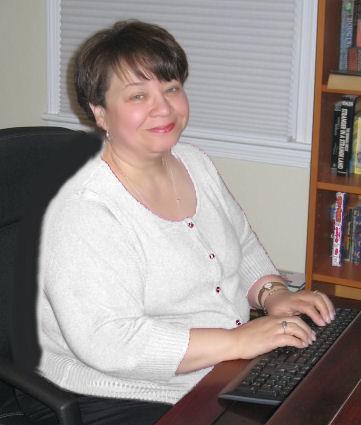 2.9 out of 5 stars
2.9 out of 5
11 customer ratings
How does Amazon calculate star ratings?
Amazon calculates a product’s star ratings based on a machine learned model instead of a raw data average. The model takes into account factors including the age of a rating, whether the ratings are from verified purchasers, and factors that establish reviewer trustworthiness.
Top reviews

Vivienne
VINE VOICE
2.0 out of 5 stars A Debut Regency
Reviewed in the United States on May 15, 2017
Verified Purchase
The premise of this series is a very clever one – crimes based on three of the seven deadly sins: in this book, ‘Greed’ (although it could also be 'Anger"). The two heroines, Lady Jane Bartholomew and Miss Margaret Renard have seemingly investigated small crimes before, but never one as big as murder, but they decide to look for clues and find the murderer. Their ages aren’t given, but I am assuming they are in their early twenties. At times they seem mature but at others, they behave rather childishly. Both of them also seem inordinately prone to take offence, and to become very angry for reasons I fail to see.

The two main male protagonists are Lady Jane’s stepmother’s cousin, Sir Hugh Cameron, a military man and government spy, and Phillip Latham, the Earl of Stanton, who is also a solicitor. Both hold the view that the roles and places of the sexes are clearly defined by Society. This attitude is more pronounced in Latham, and goes down like a lead balloon with Margaret especially, who holds very definite views on women’s capabilities and intelligence.

Up to chapter 16 few attempts at finding any clues have been made by the two women, although they have found one; the book being taken up with a ball, dinner parties and daily comings and goings. A large part of the book seemed to be spent on the discord between the female/male protagonists and I felt it lasted too long as I began to become bored with chapter after chapter of this. The syntax in some places is confusing with words that don’t make sense and I found the dialogue stilted in places.

From chapter 27 onwards the book almost descended into farce for me. It was just too implausible and too many contradictory things happened: she was gagged but she screamed; she was tightly bound but freed herself easily. A man fighting for his life turns away to look at a woman?

I almost dread to add that there are several anachronisms in the book, such as “I am sorry for your loss”, “men have the capability to be in touch with their feminine side”, “quality time with her father”, “Ms”, “I guess there is no way”. Lady Jane’s eyes went from blue to green and back to blue, while Margaret’s eyes went from emerald green to dark. Wellington Manor turned into Wellingford and back again.

The worst mistake is the very foundation on which the story rests, and is one that even the most basic research would have revealed.

However, I was pleased to note the (mostly) correct use of titles and forms of address, including the Misses Smith, instead of the usual cringe-making Miss Smiths.

As an avid reader of Regency novels, I think the writing needs to be tightened up and inconsistencies caught with editing/proofreading. 2.5 stars. Revised.
Read more
7 people found this helpful
Helpful
Comment Report abuse

susan luce
1.0 out of 5 stars Don't waste money on this!
Reviewed in the United States on July 23, 2017
Verified Purchase
A DNF for me. So poorly written both in characterization and plot that it seemed like a rough draft. Everyone used modern idioms in their speech. No real sense of the Regency...sloppy or lacking research. Honestly, I can't believe the author has read any historical novels nor can I believe she was an English teacher. Horrible to inflict this drivel on consumers.
Read more
2 people found this helpful
Helpful
Comment Report abuse

Pinky
3.0 out of 5 stars Good story: Bad editing.
Reviewed in the United States on December 18, 2017
Verified Purchase
I enjoyed the story, but there were so many grammatical mistakes that were annoying and took away my concentration from the story. this is one case where, if I had been reading from an actual book instead of my Kindle, I would have taken a red pencil to it and sent it back to the publisher. Aren't there enough English majors any more to find jobs as editors?
Read more
One person found this helpful
Helpful
Comment Report abuse

constant reader
1.0 out of 5 stars Not worth the time
Reviewed in the United States on September 16, 2017
Verified Purchase
This is probably the most poorly proofed books I have ever read. The misspelling, incorrect tenses, wrong pronouns and incomplete sentences make it painful to read. Additionally the plot is almost as silly and underdeveloped as the characters. I cannot help but wonder if it was written as a parody.
Read more
Helpful
Comment Report abuse

Kindle Customer
3.0 out of 5 stars Wordy
Reviewed in the United States on July 21, 2017
Verified Purchase
The story was really good but the writing was really worried for instant she would say she hugged her friend and then let her go we don't need to know that you are go Venture Lee we know the hug ended
Read more
One person found this helpful
Helpful
Comment Report abuse

booksgalorereviews
5.0 out of 5 stars Romance-Regency-Murder
Reviewed in the United States on July 26, 2016
Just as the blurb promised....A Vicar's Deadly Sin is a touch of romance, regency and murder. Characters were highly developed and the storyline was paced perfectly. I couldn't put this book down...I highly recommend!
Read more
One person found this helpful
Helpful
Comment Report abuse
See all reviews from the United States