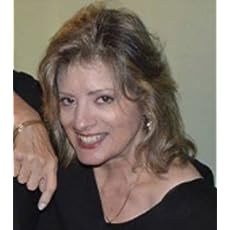 Throughout her radio career, Vicki Solá found herself guzzling black coffee, gulping down cold pizza, talking to dogs, and walking into walls.

After Solá banged her head up against a particularly hard cinder block, it dawned on her that the zany stories she cranked out were autobiographical. She felt compelled to share them. You Can't Unscramble the Omelet is the sequel to her YA Sci-Fi/Fantasy, The Getaway That Got Away. These stories detail the adventures of young Nicki Rodriguez (an alternate version of the author) as she meets up with wacky extraterrestrial megalomaniac canine-humanoid, Gneeecey.

She has just made three more related e-books available: "Gneeecey's Pals," "Gneeezle's Menu," and "Gneeecey's Glossary and Other Stuff...".

Solá and her long-running radio program Que Viva La Música, heard on 89.1 WFDU-FM and streamed worldwide at wfdu.fm, provide the New York-Metro community and beyond with salsa and Latin jazz. Featured on American Latino TV, she has served as an advisor to the Smithsonian Institution. Her articles have appeared in internationally circulated trade periodicals.

Solá lives in Regular New Jersey (as opposed to Gneeecey's usually undetectable New Jersey), with her son Frank. She is at work on a series of Gneeecey books.
Read more 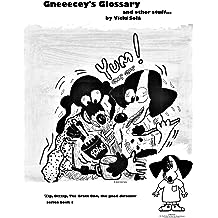 Gneeecey's Glossary and Other Stuff... (Zig, Bizzig, The Grate One, the good diroctor Book 1) May 25, 2020
by Vicki Sola
$2.99
By popular request, author Sola presents "Gneeecey’s Glossary and Other Stuff.” This fun handbook eases the culture shock for readers of all ages as they navigate the unearthly world of Perswayssick County.
“Gneeecey’s Glossary and Other Stuff” complements Sola's humorous Sci-Fi fantasies, "You Can't Unscramble the Omelet" and "The Getaway That Got Away.” Both detail the perilous adventures of young radio DJ Nicki Rodriguez, trapped in a dimension located somewhere between her native New Jersey and outer space.) Nicki’s life is never the same once she encounters greedy, zany canine-humanoid “Bizzig Gneeecey.” (This walking, talking, and exasperating Jack Russell is the power-hungry leader of Perswayssick County.)
Character biographies, personality analysis, definitions of strange words and expressions, plus drawings are included. Enjoy being lost in this wacky world! Scroll up to get your copy of “Gneeecey’s Glossary and Other Stuff! 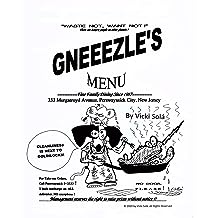 Gneeezle's Menu: Astronomical Gastronomical Adventures May 16, 2020
by Vicki Sola
$2.99
What’s a starving Earthling to eat when trapped in a bizarre dimension located somewhere between New Jersey and outer space? Lo and behold, here's an alien menu that was snuck back to Earth after such an accidental trip to zany canine-humanoid Gneeecey's unworldly Perswayssick County! Scroll to the top of this page and get your “Gneeezle’s Menu: Astronomical Gastronomical Adventures” now! 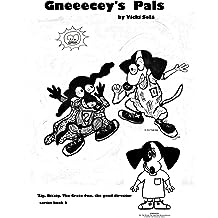 Gneeecey's Pals (Zig, Bizzig, The Grate One, the good diroctor Book 2) May 2, 2020
by Vicki Sola
$2.99
Vicki Sola's zany short stories, suitable for all ages, will provide you with well-needed laughs! These tales (as opposed to tails) feature wacky characters related to her fun Sci-Fi/Fantasy works, You Can't Unscramble the Omelet, and The Getaway That Got Away. Included here is a hilarious interview where alien canine-humanoid Gneeecey attempts to provoke the usually unflustered author Sola. And there are the unauthorized excerpts from Gneeecey’s WGAS-TV’s program guide! Visit Perswayssick County and escape reality, scroll to the top of this page, and get your copy of “Gneeecey’s Pals” now!
Read more 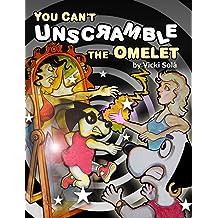 Recent college grad Nicki Rodriguez always believed courage and determination would get her through anything, even interdimensional travel…until now.

Just as Nicki struggles to settle back into life after barely surviving a visit to an unearthly locale, its zany canine-humanoid leader Gneeecey comes banging on her door. But little does he realize that alien gangsters have followed him. Nicki and the walking, talking (and exasperating) Jack Russell dog flee in terror, hurtling through space and time. When they land, it’s double trouble, danger squared—and a bunch of laughs, too. Nicki and Gneeecey find themselves stranded in a bizarre universe where they confront their evil lookalikes, and Nicki discovers new things about herself.

One thing is for sure, though. Nicki and Gneeecey will have to stop fighting and pull together if they ever expect to get out alive.

Scroll to the top of this page and get your copy of “You Can’t Unscramble the Omelet” now! 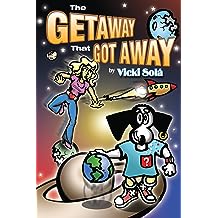 The Getaway That Got Away Nov 15, 2011
by Vicki Solá
( 10 )
$3.97
Dismayed by a basement-apartment existence supported by two low-paying radio jobs, twenty-something workaholic Nicki Rodriguez faces a dramatic change in outlook when fate transports her to an even lousier place-a distorted world inhabited mostly by canine-humanoids trapped in a dimension somewhere between New Jersey and outer space. Nicki searches desperately for a pilfered portfolio containing ten thousand hard-earned dollars, praying that her life-threatening dimension burn will heal, so she can try to return to "regular New Jersey" and her old life. All the while, Perswayssick County's greedy, tail-wagging leader, self-described "business maggot" Dr. B. Z. Z. Gneeecey, is selling Perswayssick County to a mob of waxy-faced gangster-style aliens. And he's convinced them that Nicki has something they need!
Read more
Other Formats: Paperback