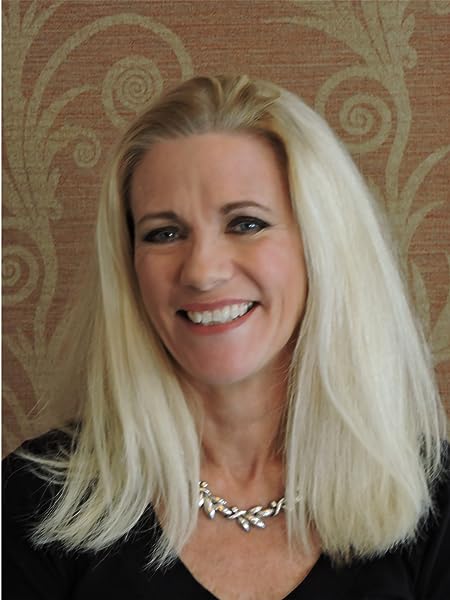 Victoria Landis is a writer, editor, and an artist living and reveling in the insanity and fun that is South Florida, recently relocating to Key Largo. She has lived in six states, including twelve years in Hawaii, which is also a fun place - but considerably more sane.

She's a seventeen-year member of Mystery Writers of America and served on the board of the Florida Chapter. She Co-Chaired the FMWA's SleuthFest Writers' Conference for four years, 2015-2018. She's also a member of Sisters in Crime.

Victoria has taught writing craft and cover design in workshops and seminars at the SleuthFest Writers' Conference, the Murder on the Beach Summer Authors Academy, and at the Alvin Sherman Library at Nova Southeastern University. She especially enjoys 'big picture' editing and 'book doctoring'.

Fun fact: In 2004, Victoria wrote Chapter Nineteen in one of the silliest (and most hilarious) progressive novellas ever produced - Naked Came the Flamingo. Edited by Joan Mickelson and the late, great Barbara Parker, accomplished writers Elaine Viets, Randy Rawls, and the PJ Parrish team contributed chapters, along with many others.

She wrote a monthly humor column for The Parklander magazine for ten years.

In addition, she designs book covers - including her own.

Her website is www.VictoriaLandis.com - where you'll find her blog & book reviews and the immensely popular (and funny) character 'interviews', as well as humor columns, pictures, maps of book locations, and even a short glossary of Hawaiian words.

To see her artwork, please go to her website - www.landisdesignresource.com.

She can be reached via email at - BookPainterPress@gmail.com 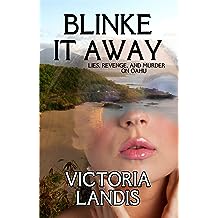 Blinke It Away Nov 18, 2013
by Victoria Landis
( 70 )
$3.99
"Victoria Landis delivers a skillfully crafted page-turner with Blinke It Away. Vivid exotic settings and compelling characters come together in an engaging mystery that demands to be read in one sitting. Not to be missed." - Joe Moore, International Best-selling Co-Author of The Phoenix Apostles.

Lauded for its authentic grasp of the local Hawaiian culture, Blinke It Away takes the reader into the everyday bustle of ordinary life in Hawaii and shows the reality far from the staging presented to tourists.

It's an idyllic day on Oahu until Bess Blinke interrupts a bizarre robbery that ends in homicide. In the following days, she discovers terrible secrets tied to the crime, and her world unravels. When the killer realizes the depth of what she knows and comes after her, she escapes, hides, and plots to reveal the truth and expose the brutal force behind several murders - hoping to do so before they can kill her, too.

"I couldn't wait to get home to read more of Blinke It Away. Forget the chores; you'll want to sit down until you finish the story. Five stars!" - Nancy J. Cohen, Agatha Award Nominee & Author of the Bad Hair Day Mysteries

"Victoria Landis pens a tale of suspense filled with well-crafted plotting, vivid characterizations, and lush descriptions of the Hawaiian landscape. You can practically feel the Pacific breezes, hear the crash of the North Shore surf, and smell the tropical blooms and the burning pineapple fields that 'make it seem as though the entire populace decided to bake a pineapple upside down cake at the same time.' " -Miriam Auerbach, Author of the Dirty Harriet Mystery Series

". . . a series of events that allow the author, Victoria Landis, to paint a picture of Oahu that no tourist could know." - Randy Rawls, Author of the Beth Bowman PI Series & the Ace Edwards PI Series 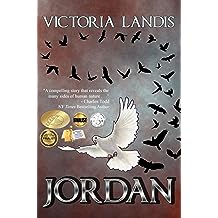 Jordan Feb 2, 2019
by Victoria Landis
( 23 )
$4.99
Jordan is the fast-paced, riveting story that answers the question - how would human nature react to a modern-day miracle in a viral social media world?

"Victoria Landis has written a compelling, exciting but tragic tale of a gift of good in the world and how it is corrupted by the machine of greed and ambition. Please read this!" - Andrew Gross, #1 New York Times Bestselling Author of Button Man, Saboteur, and The One Man

"We call it a page turner!" - The Conch Republic Coconut Telegraph

When Petra Simmons and her brother, Andy, help a seemingly homeless woman, it immediately changes their lives forever. Within days, it's clear the woman, Jordan Crissman, possesses an amazing ability - perhaps the most miraculous ability of all.

They realize in the current world of viral social media, they must be careful. How best to employ the miracle without causing havoc? They plot a strategy. Despite their plans, word gets out too fast, and the world comes running - invading and overwhelming South Florida - along with serious danger.

"In Jordan, Victoria Landis takes her skill for developing characters and relationships to a new level. This work portrays a new view of an age-old question. How do people react when confronted with things they don't understand? A compelling story that reveals the many sides of human nature, told in Victoria Landis' talented manner." - Charles Todd, Mary Higgins Clark Award Winner and NY Times Best Selling Author

"We say it's a page turner! The characters are so real, you feel as if you know them personally. The setting is opulent Boca Raton, where the rich get richer, and there seems to be nothing that money can't buy. It's love vs. greed, who will succeed? I couldn't put it down and can't wait for the sequel!" - The Conch Republic Coconut Telelgraph

"Once you begin reading this story, you won't be able to put it down." - Nancy J. Cohen, Agatha Award Nominee & Author of the Bestselling Bad Hair Day Mysteries

"Victoria Landis has masterfully combined great elements into a highly-charged, compelling story with an explosive ending. Read Jordan! It's good for what ails you." - Don Bruns, USA TodayBest Selling Author

"What would happen if a young woman appeared with mysterious healing powers, a woman intent on using her newfound talents to improve the world? How would the public react? What about the media, the government? Would both welcome her with open arms? Or, would there be slanderous articles and broadcasts speculating on the source of her powers, perhaps accusing her of witchcraft or being Satan's offspring? Jordan lives these questions and many more. Follow her as she wends her way through friendship, love, and evil, only wishing to bring healing to those who need and deserve it." - Randy Rawls, Author of the Beth Bowman PI series and the Ace Edwards PI series

"If you're looking for a story that's truly original, here it is." - Vincent H. O'Neil, Author of The Sim War series
Read more
Other Formats: Paperback 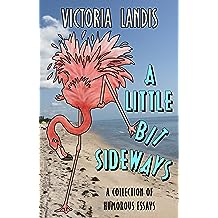 A Little Bit Sideways: Over 80 Laugh Out Loud Essays Aug 7, 2017
by Victoria Landis
( 12 )
$3.99
Ever wonder about crocodiles with crystal teeth? How to get more nookie? Cursed Christmas trees? Zombies?

A Little Bit Sideways is a collection of humorous essays. From human nature, crazy foods, weird history, romance, and so much more, this book is full of entertaining facts you didn't know you wanted, delivered in fun.

Author Victoria Landis chose from a decade of humor columns and essays to compile this book.

"Imagine a combination of Lewis Black and Lewis Grizzard with a dash of Frank Cerabino, add a female perspective on life, love, and what you really need to hear. That is 'A Little Bit Sideways'. Victoria Landis tells is like it is in a hilariously honest way." - Charles Todd - Mary Higgins Clark and Barry Award-winner

"Inquiring minds want to know about Viagra potatoes, mincemeat-eating crocodiles, and the coming zombie apocalypse. In her new book, Victoria Landis turns her rambunctious sense of humor loose on an unsuspecting public with her achingly funny observations about the end of the world or an alien saucer crash. And who is the mysterious Dr. Vegetables? The future President Taylor Swift may have the answers. Clear you mind and order the book whether you're upright or sideways." - Dana J. Summers, Award-winning editorial cartoonist for Tribune Media/The Orlando Sentinel

"Love this! Like having a great conversation with a treasured friend - Victoria Landis is hilarious, wise, and brimming with insight. You'll smile from the first word - and these wonderfully observant and witty essays prove Landis is a terrific new voice in humor." - Hank Phillippi Ryan, Agatha, Anthony, and Mary Higgins Clark award-winning author

"Victoria Landis is the Erma Bombeck of our times. I've never laughed so hard while learning so much. Do you miss Seinfeld, the show about nothing? Well, this book's for you. Landis's collection has hilarious (and informative) articles about life, the world, and everything in it. Once you start reading, you won't be able to stop." - Vincent H. O'Neil, St. Martin's Malice Domestic competition winner and author of the Frank Cole Mysteries and The Sim Wars series.

"Don't try to see inside her head - it might blind you . . . Just enjoy her humor." - Randy Rawls, Author of the Ace Edwards PI series and the Beth Bowman PI series.

"Victoria Landis had me from the moment I finished the last page of her novel, 'Alias: Mitzi & Mack', and after reading her hilarious new collection of humor essays, I've never been happier about 'being had' again." - John Hartnett, Humor Blogger, TV Writer, and Stand-up Comedian

"A little bit sideways, upside down, inside out, and bass ackwards - Victoria Landis will have you rolling on the floor laughing . . ." - Miriam Auerbach, Author of the Dirty Harriet Mysteries

"Landis looks at life through a prism of humor - a skill in short supply these days . . ." - Deborah Sharp, Author of the Mace Bauer Mysteries 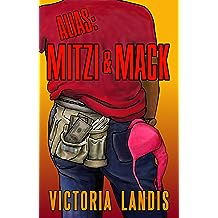 Alias: Mitzi & Mack Oct 14, 2013
by Victoria Landis
( 18 )
$3.99
A Laugh Out Loud Drama of a Modern Screwball Comedy—like an It Happened One Night with a racier plot line and a razor sharp assessment of love, lust, and marriage, plus funny money making in the iPhone era.

The crazy world that is South Florida provides the setting for one of the best bookclub books, with characters you’ll love and despise, bringing to life a story for grownups that will raise the question—could this happen? (Hint—yup.)

Shirley and Stanley Nowack retired to West Sago Beach, Florida, expecting to live out their lives playing mah-jongg and golf in the warm sunshine.

Cue the worst recession since the 1930s. Their already meager investments haven’t rebounded. Determined not to spend their remaining years dumpster diving and sleeping in parks, they find jobs. Menial ones. They’re over 70 and fortunate to get those.

But bad luck and trouble soon pummel them into desperation. Add in their control-freak daughter’s and Don Juan son’s problems, and they’re on a hilarious collision course with disaster.

This rule-following, white bread, and average couple hatch a scheme to save their home and return them to days of leisure. There’s just one eensy problem. If they’re caught, they’ll go to jail.