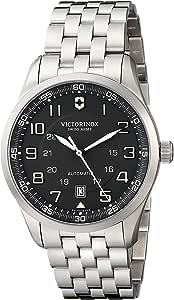 1 11 1
Is this feature helpful?
Thank you for your feedback.

4.4 out of 5 stars 39 ratings
| 3 answered questions
Available from these sellers.

In 1884, Karl Elsener opened a cutlery workshop in Ibach-Schwyz, Switzerland with the support of his mother Victoria. Just like that, Victorinox Swiss Army was born.

In 1891, Elsener and his coworkers deliver knives for soldiers in the Swiss Army for the first time. Six years later, the company legally protected the names Swiss "Officer's" and "Sport Knife." The model later became known as the Original Swiss Army Knife.

Following Elsener's mother's death in 1909, the company incorporated her name into the brand and unveiled its well-known cross and shield emblem. Elsener arrived at the name Victorinox by combining the name Victoria with "inox," an abbreviation of the French word for rust-resistant steel, “inoxydable.”

In 1989, Victorinox officially entered the timepiece business in the United States under the brand name Swiss Army. In 1999, Victorinox partners with the American TRG Group in St. Louis and enters into the international travel gear market. In 2001, the company launched a fashion line in the U.S. with a collection that delivers technical and tailored styling capturing the brand’s essence of practical luxury. If that wasn't enough, in 2007 Victorinox sets up Victorinox Swiss Army Fragrance AG, and in 2009 Victorinox Swiss Unlimited was launched.

Victorinox Swiss Army treasures its heritage, the future is equally inspiring. Innovation is at the heart of each Victorinox product it introduces, with exciting technical advancement throughout all its product categories.

4.4 out of 5 stars
4.4 out of 5
39 customer ratings
How does Amazon calculate star ratings?
Amazon calculates a product’s star ratings based on a machine learned model instead of a raw data average. The model takes into account factors including the age of a rating, whether the ratings are from verified purchasers, and factors that establish reviewer trustworthiness.

Adam S.
3.0 out of 5 stars QC/sketchy packaging issues aside, the watch is pretty good.
Reviewed in the United States on March 19, 2016
Verified Purchase
This watch came with a suspect amount of plastic missing. No plastic on the bracelet, nothing covering the crystal or exhibition window.
The dial itself is great, except slightly misaligned. I probably could've exchanged it but I had to go on a trip and wanted to take the watch.

It also came with a tiny chip on the bottom of the case, but it didn't really bother me, probably because I used a gift card and was a bit reckless with my spending. I really like the dial design. That was what sold me on the watch.
The bracelet is quite nice as well, but I think the watch works better on a nato strap. I give Victorinox points for the bracelet; the quality is very solid.

Don't get me wrong, the watch itself is nice but the particular one I got was a little sketchy, at best.

At full retail, the watch is not worth it, in my opinion. At under 500, it is a very good deal. Just examine the watch carefully before you accept it.

Mr Chuck
5.0 out of 5 stars All-around perfect entry-level Swiss time piece.
Reviewed in the United States on March 14, 2018
Verified Purchase
Ive had this watch for going on 2 yrs now. Perfect in every way. Size is just right for everyday use and I wear most days. ETA automatic movement that should last a lifetime if properly cared for. Finish on the case is very well done and feels expensive. Stainless steel band is heavy, but in a good, it's solid kind of way. The dial is simple but very well done.

I bought a Barton brown leather strap with white sticking and goes well with it, but I like to alternate every few weeks or so.

Was looking at an Oris Propilot date, but couldn't justify the extra 500 bucks. Still love the Oris, but for now, this watch makes me very happy.
Read more

Garrett Lowenthal
5.0 out of 5 stars Stellar Entry-Level Swiss Automatic Timepiece
Reviewed in the United States on April 28, 2015
Verified Purchase
This Victorinox AirBoss (model 241508) serves as a solid entry-level watch in the world of Swiss automatic timepieces. It has excellent value for money. I paid about half the retail price of $1050 by purchasing from Amazon directly. Note that Amazon provides a limited 2-year warranty through a third-party watch repair service rather than from the manufacturer itself if purchased from an AD.

The watch is really comfortable to wear. It is beautifully crafted with impeccably good looks. The watch is versatile, as it goes well with formal attire or casual clothes. It has easy-to-read luminescent hands and numbers on a black dial. The lume is adequately bright (though not the brightest on the market) and gradually fades over several hours.

The 42 mm case makes for a great all-around size for the average man's wrist (7-8 in.). Even on my 6 3/4 in. wrist, the watch looks fine without appearing awkwardly overbearing.

This self-winding mechanical watch has the ETA 2824 movement and has been running about 12 seconds fast daily. I can't seem to locate the official specifications from the accompanying manual or Swiss Army website, but from what I can gather on the Internet, I believe that is within spec for a watch of this class.

Overall, the Victorinox AirBoss is a solid purchase which I expect to enjoy for years to come.
Read more
8 people found this helpful
Helpful
Comment Report abuse

One thing to watch: Do not buy this from AreaTrend, they won't price match for you. Also you don't be able to return the item even if you just open the box and put it on your wrist for 2 seconds. Just buy it from Amazon or some other cool seller.
Read more
One person found this helpful
Helpful
Comment Report abuse

Steven L.
5.0 out of 5 stars Amazing
Reviewed in the United States on December 20, 2019
Verified Purchase
This watch is great value for the money. It keeps good time, it's easy to read and it wears smaller than its size, so it is versatile. I love it!
Read more
Helpful
Comment Report abuse

Rod Stevens
5.0 out of 5 stars Great watch
Reviewed in the United States on January 10, 2014
Verified Purchase
I've had my eye on this watch for over a year but I felt the price was a little high. I purchased a Swiss Army "Ambassador" It was a good looking watch, but it was hard to read. The numbers were silver and in some lighting situations, I really had trouble reading the time. Also the Ambassador ran slow by about 2 minutes a week.
Finely Amazon dropped the price on the AirBoss and I purchased it. I absolutely love it. Looks great and so far after 2 weeks the time is correct. Additionally, it is extremely easy to read. Just glance at it and the time reads clearly. I'm very happy with my purchase and highly recommend it.
Read more
3 people found this helpful
Helpful
Comment Report abuse

Stlsailor
5.0 out of 5 stars I'm very happy......
Reviewed in the United States on September 11, 2016
Verified Purchase
This is my second Victorinox Air Boss, one black face, one white face. Both accurate within 4 sec per day. I'm very happy to have an automatic Swiss movement in a great looking 42 mm watch at this price point!
Read more
Helpful
Comment Report abuse
See all reviews from the United States

Page 1 of 1 Start overPage 1 of 1
This shopping feature will continue to load items when the Enter key is pressed. In order to navigate out of this carousel please use your heading shortcut key to navigate to the next or previous heading.
Back
Next
Pages with related products. See and discover other items: boss watch, watch sapphire, Swiss Design Watches, Swiss Made Mechanical Watches