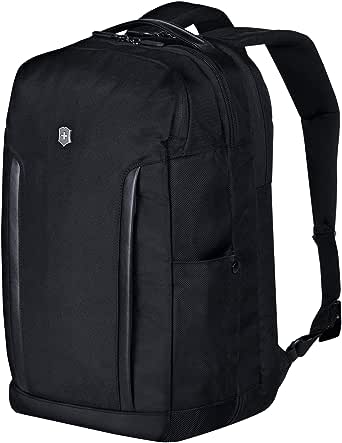 4.2 out of 5 stars 51 ratings
| 9 answered questions
Available at a lower price from other sellers that may not offer free Prime shipping.
Show more
New (8) from $103.20 + FREE Shipping

ictorinox Backpacks express Swiss Heritage in all senses. Developed in the middle of the Swiss Alps it brings outstanding functionality to urban areas, making it the perfect companion for all day adventures. Whatever challenges your day, as a student, business man or sports enthusiast – within the Victorinox collection you will find the perfect backpack solution. See our vision through an iconic design, materials of highest quality and unique, functional details – inspired by the “Swiss Army Knife”. The combination of Alpine Rucksack Engineering Knowledge and an unrivaled history in the development of the most functional knife make Victorinox the true Swiss Backpack Brand.

Inspired by the Victorinox Swiss Army Knife itself, we’ve combined our Alpine rucksack engineering knowledge with a deep understanding of modern business needs to create the Altmont Professional Deluxe Travel Laptop Backpack. This smart pack accompanies you on every journey through the professional landscape.

The main compartment features a book-style opening for easy packing and includes a file divider, a zippered storage pocket, a stash pocket and a zippered pocket with easy-to-clean lining for toiletries.With the Deluxe Travel Laptop Backpack you can be confident that everything you need to stay focused and equipped is with you.

In 1884, Karl Elsener opened his cutler’s workshop in Ibach-Schwyz. At this time Switzerland was still one of the poorer countries in Europe. In the early years, Karl Elsener worked to combat poverty and unemployment in the Schwyz basin, creating jobs and helping stem the flow of emigration.

In 1891 he supplied the soldier’s knife to the Swiss Army for the first time. He went on to develop the Swiss Officer’s and Sports Knife –now the iconic Swiss Army Knife– in 1897, creating the foundation for a flourishing company that would be able to hold its own on the world stage.

From then on, his spirit of solidarity, deep roots in the region, and a strong commitment to solid values shaped the Victorinox company philosophy.

When the days are long or business requires an overnight stay, this laptop backpack featuring a clothing storage compartment is ready for the challenge. Padded rear compartment with lockable zippers protects up to a 15" laptop and a tablet. Main compartment features book-style opening for easy packing and includes a file divider, a zippered storage pocket, a stash pocket, a zippered pocket with easy-to-clean lining for toiletries and a large zippered mesh storage compartment ideal for clothing containing two stretch mesh side pockets. Additional hanging essentials organizer featuring a series of pockets, storage slots and accessory loops can be removed and hung near a desk or work space, and folds to a compact tri-fold design for use without the bag. Exterior features two vertical-zip front pockets, a hidden zippered side pocket, a zippered top pocket and an adjustable-size side pocket ideal for a water bottle or umbrella. Padded back panel and padded, adjustable shoulder straps for maximum comfort. Soft-grip haul handle. Rear sleeve slides over the handle system of wheeled luggage for easy travel with multiple bags. Attached travel Sentry approved combination lock works with lockable zippers to secure laptop and tablet compartment

4.2 out of 5 stars
4.2 out of 5
51 customer ratings
How does Amazon calculate star ratings?
Amazon calculates a product’s star ratings based on a machine learned model instead of a raw data average. The model takes into account factors including the age of a rating, whether the ratings are from verified purchasers, and factors that establish reviewer trustworthiness.
Top Reviews

Scott Patterson
4.0 out of 5 stars Nice business backpack, but is on the small side.
Reviewed in the United States on October 27, 2019
Color: BlackVerified Purchase
This is a nice backpack pack with a clean design and a luggage sleeve. But along with the clean design you sacrifice the interior space. It holds very little outside of my MacBook Pro, a small padfollio, various chargers, etc. It has several small pockets that you can fit small items in. One pocket on top that hold my sunglasses and passport, and that is about it. I will use this backpack for short 1-2 day trips and I'm still on the search for a backpack that looks great, holds more and has a luggage sleeve!
Read more
Helpful
Comment Report abuse

Sergio RC
5.0 out of 5 stars Fancy and handy
Reviewed in the United States on September 5, 2019
Color: BlackVerified Purchase
This backpack is really nice. Its finishing is flawless. I like the internal compartments and how it is designed. Allows you to keep things tidy and still have fast access to what you need. There is an internal section which you can put your clothes in for a day trip. It is very light weighed if compared to other backpacks I had. Even when it is empty, it keeps its shape and does not look like an empty cloth bag. The only issue is that the strips need to be readjusted every now and then. But his is not a problem to me, because sometimes I need them loosened.
Read more
Helpful
Comment Report abuse

Nancy
5.0 out of 5 stars Good for the busy traveler.
Reviewed in the United States on October 22, 2017
Color: BlackVerified Purchase
My husband travels with this backpack. It is very handy with lots of small pockets and a laptop area. It also has a special thing on the back to slide over the handle of a luggage roller bag so you can pull your roller bag with your backpack securely attached. Makes traveling through airports easier.
Read more
2 people found this helpful
Helpful
Comment Report abuse

Greg G.
2.0 out of 5 stars Two Stars
Reviewed in the United States on June 27, 2018
Color: BlackVerified Purchase
I like this pack, but the shoulder strap adjustments constantly slip and do not stay in place
Read more
2 people found this helpful
Helpful
Comment Report abuse

Kindle Customer Number
1.0 out of 5 stars Not A Durable Item
Reviewed in the United States on October 18, 2018
Color: BlackVerified Purchase
After two months of regular usage, one of the shoulder straps separated from this backpack. Had to throw it away.
Read more
One person found this helpful
Helpful
Comment Report abuse

Amazon Customer
5.0 out of 5 stars Great backpack, ideal for frequent business travelers
Reviewed in the United States on November 19, 2018
Color: BlackVerified Purchase
Throughly well made as you would expect from Victorinox. Durable design with plenty of pockets and compartments. Spacious middle section with plenty of room for clothes in addition to the usual business essentials if traveling. Strong protective lining at the rear for laptops including a security chain with numerical lock. Highly recommended purchase for anyone looking for a professional looking laptop backpack that will last.
Read more
Helpful
Comment Report abuse

Joseph A. Murphy
4.0 out of 5 stars great bag
Reviewed in the United States on January 10, 2020
Color: BlackVerified Purchase
Solid bag that is big enough but not too big very good value
Read more
Helpful
Comment Report abuse
See all reviews from the United States

Paraskevi Karanasiou
3.0 out of 5 stars Not waterproof
Reviewed in Germany on March 17, 2019
Color: BlackVerified Purchase
I would give more on this IF the water did not come through the middle zipper. Other than that good.
Read more
Helpful
Sending feedback...
Thank you for your feedback.
Sorry, we failed to record your vote. Please try again
Report abuse

Page 1 of 1 Start overPage 1 of 1
This shopping feature will continue to load items when the Enter key is pressed. In order to navigate out of this carousel please use your heading shortcut key to navigate to the next or previous heading.
Back
Next
Pages with related products. See and discover other items: victorinox luggage, backpacks for traveling with laptops, travel notebook accessories, victorinox bags, victorinox travel bag, victorinox bag