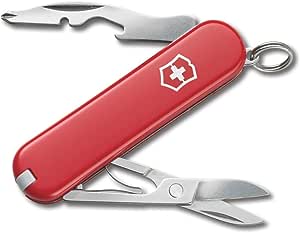 Visit the Victorinox Store
4.6 out of 5 stars 199 ratings
| 9 answered questions

The various tools of a swiss army knife are manufactured from high-quality steel with precisely tuned features that are essential for the particular application. The steel is tempered, annealed and polished to achieve the necessary hardness and provide optimum resistance to corrosion. With it's unique build Swiss Army Knives require easy but particular care. Use the recommendations below to keep your knife at it's peak functionality.

When a pocket knife comes without a blade, it can go everywhere you do. Make your next journey a well-equipped one with the Jetsetter, a sleek, slim profiled Victorinox piece that’s packed with functionality, including scissors and a screwdriver. With the Jetsetter, you don’t just take the journey, you take your tools, too.

The Four Cornerstones of Victorinox

The various tools of a Swiss Army Knife are manufactured from high-quality steel with precisely tuned features that are essential for the particular application. The steel is tempered, annealed and polished to achieve the necessary hardness and provide optimum resistance to corrosion. Every knife embodies our four cornerstones: quality, functionality, innovation and iconic design.

The Swiss Army Knife is the ultimate multi-tool. Whether you need a magnifying glass to read fine print or a metal saw to cut through iron, the Swiss Army knife has your back. In addition to a blade, these gadgets include various implements such as screwdrivers, bottle openers, and scissors.

Innovation is our Tradition

Innovation is our tradition and has been ever since we patented the first Swiss Army Knife in 1897. Here in the Swiss Knife Valley, we take lumps of molten steel and blend with generations of experience to forge knives which are loved all over the world. As we continue to find new ways to improve our knives we also strive to apply better solutions that meet new requirements and our customers unarticulated needs.

In 1891 Karl Elsener, the owner of Victorinox, was under contract by the Swiss Army to produce a folding pocket knife to be suitable for use by soldiers for opening canned food and disassembling the Swiss service rifle. Elsener invented a special spring mechanism allowing him to attach the tools on both sides of the handle, using the same spring to hold the tools in place. This innovative design meant Elsener could put twice as many features on the knife, which included a blade, a second smaller cutting blade, reamer, can-opener, screwdriver, corkscrew, and wood fiber grips. The Swiss Army Knife is the most recognizable icon of utility and smart design, and the knives are still made exclusively in only two factories in Switzerland.

Packing 7 functions and measuring just 2 ¼ in length, the Victorinox Swiss Army Jetsetter is the perfect addition to any keychain. This model is unique from most in that it does not feature a blade, allowing it to be flight friendly. Keep all the essential Swiss Army Knife functions at hand without the worry of airport regulations.

Durable enough to last a lifetime, and guaranteed for it, you can rely on this knife for years to come. With elements such as a magnetic Phillips screwdriver, scissors, and bottle opener you'll always have the right tool for the right situation.

Like all Swiss Army Knives, the Manager has a lifetime warranty, stainless steel implements and Swiss-made quality and durability.

History and Heritage
In 1884, Master Cutler Karl Elsener opened a cutlery shop in Ibach, Switzerland. There, he and the cutlers’ union he formed produced the finest steel cutlery, finished with the now-famous proprietary edge preferred globally by professional and home cooks. In 1891, Karl supplied the Swiss Army with its standard issue Soldier’s Knife and in 1897 with the Officer’s Knife. In 1921, after the death of his mother, Victoria, and with the advent of stainless steel, then known as “inoxydable"" and used in the production of his cutlery, Karl changed the name of the company to Victorinox. It is from those humble beginnings that a worldwide icon was born.

Today, Victorinox is still owned and operated by the Elsener family, and both the company and family still resides in the small village of Ibach, Switzerland.

Care Tips for Swiss Army Knives
The various tools are manufactured from high-quality steel with precisely tuned features that are essential for the particular application. The steel is tempered, annealed and polished to achieve the necessary hardness and provide optimum resistance to corrosion.

Sharpening
To re-sharpen your knife, use a whetstone at an angle of 15°– 20°. This will result in a cutting angle of 30°– 40°. If sharpening on a grinding wheel, always cool with plenty of water to avoid excessive temperatures and the resulting damages that may occur.

Cleaning
After you’ve used your Swiss Army Knife for all of its various applications, such as cutting open numerous boxes, you may notice that the blades begin to stick together. Opening and closing the blades in warm water several times will allow the tools to easily move again. Once they have dried, it is recommended, to apply a small drop of oil between the blade or tool shank and the spring. To optimally maintain the locking mechanism, periodically apply a drop of our recommended Swiss Army Knife Oil. Never put Swiss Army Knives in the dishwasher.

Page 1 of 1 Start overPage 1 of 1
This shopping feature will continue to load items when the Enter key is pressed. In order to navigate out of this carousel please use your heading shortcut key to navigate to the next or previous heading.
Back
Next
Pages with related products. See and discover other items: camping stocking stuffers