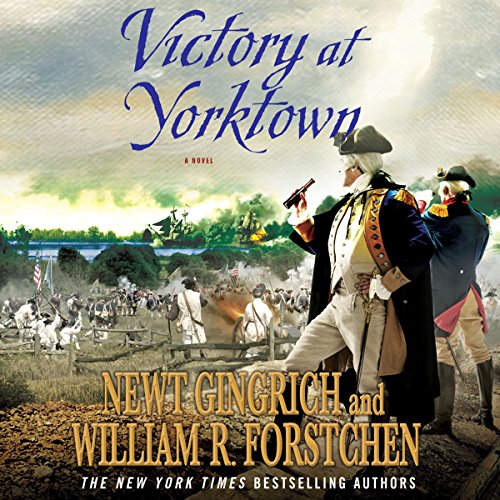 Victory at Yorktown: A Novel

It is 1781, and Washington and his army have spent three years in a bitter stalemate, engaging in near constant skirmishing against the British. The enemy position in New York City is too strong, all approaches blocked by the Royal Navy. At last, two crucial reports reach Washington. The first is that the French have briefly committed a fleet to the American coast. The second is that British General Cornwallis, driven to distraction by protracted warfare in the Carolinas, has withdrawn into Yorktown. Washington decides to embark on one of the most audacious moves in American military history. He will force-march nearly his entire army south more than 300 miles, in complete secrecy, counting on a blockade of the Chesapeake Bay by the French navy, fall upon Cornwallis, and capture his entire force. It is a campaign laden with "ifs" but the stalemate must be broken, otherwise America, after six long years of war, will crumble.

Sgt. Peter Wellsley must pave the way for the army, neutralizing any loyalists who might provide warning. On the other side, Allen Van Dorn receives reports from civilians that something is afoot and is tasked to find out what. As Wellsley moves to block any leaks, Van Dorn tries to penetrate the screen. When one of the former friends is captured, both must decide where their true loyalties lie during the heat of the Battle of Yorktown, as Washington’s professional army, once a "rabble in arms", executes the war’s most decisive contest.

With Victory at Yorktown, critically acclaimed authors Newt Gingrich and William R. Forstchen have reached the pinnacle of their talents in a tour de force narrative of one of America's most important heroes.

Special invitation from Audible!
Learn more about Membership
List Price: $34.99
You Save: $5.00 (14%)
By completing your purchase, you agree to Audible’s Conditions Of Use
Sold and delivered by Audible, an Amazon company

E. Baxter
5.0 out of 5 stars A victorious conclusion to the Washington series
Reviewed in the United States on March 28, 2013
Verified Purchase
Throughout the Washington series by Gingrich and Forstchen we've seen the general give blood, sweat, and tears to the American cause. At Yorktown his dedication and sacrifice are finally vindicated. The story opens some months before the decisive battle, just after uncovering the traitor, benedict arnold's attempt to give West Point into the hands of the British. The British officer in charge of military intelligence has been captured and his fate is to be decided by Washington. Embroiled in the drama here we see the familiar characters of Peter Wellsley and Allen Van Dorn, childhood friends who are now swept up in opposing sides of the war. The scenes which follow are tense and kept me rapidly turning the pages. Soon the narrative turns to preparations for the movement to and seige of Yorktown. While Washington and the French general, Rochambeau, maneuvor their forces and hope for help from admiral De Grasse's naval force, a running game of spy verses spy is played out between Wellsley and Van Dorn. This plotline is one of the highlights of the book and had me on the edge of my seat. My investment in both these characters was very strong and I couldn't wait to see how their struggle/friendship would play out. Washington knows he could be on the cusp of a great victory. He also knows that it could all fall apart, whether it be from lack of funds from Congress or simply the winds and tides. Washington's sense of honor and strength of character are front and center throughout the book and portray him quite accurately as the man for the times, a man for all time. After thoroughly enjoying the previous two books Victory at Yorktown is everything I had hoped it would be. The action is well-written and the plot superbly paced. The characters invest the reader emotionally in their plight on both sides of the conflict and serve well to display some of the costs of war. When in the midst of the action it is intense, fierce, and rapidfire. During slower parts the atmosphere is suspenseful and never lets up. A fan of the series will surely not be disappointed. Victory at Yorktown is a great patriotic novel and heartfelt reminder of the sacrifice given by so many to secure our freedoms. Highly recommended.
Read more
One person found this helpful
Helpful
Report abuse

TUCSON ROBERT
3.0 out of 5 stars Humanizing George
Reviewed in the United States on December 18, 2012
Verified Purchase
Authors Gingrich and Forstchen breathe life into the man who is known as the father of our country. They describe George Washington's doubts and fears, his missteps, his weaknesses and his strengths, but most of all; they painstakingly develop George Washington into a human being. They do this through the brilliance of realistic and compelling dialogue. The author's "novel" approach to history brings the late 18th century efforts by Washington into an interesting focus for the reader whether or not he is a Revolutionary War buff or simply wants to understand the man in more humanistic terms.
General Washington's brilliance and dogged determination as a military strategist and leader of men in a grueling six-year bloody war culminating in the surrender of Cornwallis at Yorktown is realistically highlighted throughout the book.
The last chapters were by far the most cogent depicting the true personalities of Washington and his closest comrades-in-arms as well as his opposing British foe.
One compelling phrase struck me as it relates to a warrior's thoughts--then and now: "So strange war. We so fervently beg for its ending, and yet when that ending comes, comrades for the last time, we somehow wish we could linger but a few more days, share one more campfire, even share one more moment of the thrill of triumph." So very true. The men who fight wars have not changed.
I recommend the book as a quick and interesting read of humanistic history.
Read more
3 people found this helpful
Helpful
Report abuse

Navy Dad
2.0 out of 5 stars A Yarn for sure but not a comprehensive look at the events of the siege.
Reviewed in the United States on May 10, 2016
Verified Purchase
I expected the book to be a comprehensive story of the siege of Yofktown. The book is history woven with a yarn of fictiional characters. They keep your interest an paint a picture of historical event leading up to the march to Yorktown but The final pages are disappointing. This is where important facts of the seige are iqnored....the night bayonet charge and taking of redouts 9 & 10 the attempt of the British to escape across the river, the sinking/sculling of British ships in the river, all of which played a part in Cornwallis decision to surrender. Major parts that lead to the surrender are all missing from this book. If you are looking for a book detailing the battle and the reasons that determined why Cornwallis flew the white flag this is not the book for you.
Read more
One person found this helpful
Helpful
Report abuse

Jerry
3.0 out of 5 stars Good but Missing and Interesting Side Story
Reviewed in the United States on December 7, 2013
Verified Purchase
Not as enthralling as other Gingritch/Forstchen works. Nevertheless an good look at history through historical fiction. Yet I wonder why the authors in their zeal omitted the single German military unit led by Guillaime des deux-Ponts, or Wilhelm of Zweibrücken, a small city in western Germany near the French border. Zweibrücken is sister city to Yorktown Virginia, according to a sign on the highway that I saw a few years ago. Some research while I was in Yorktown, bourne out a few laters in a visit to the city museum in Zweibrücken said that Wilhelm, disgusted with his German masters, swore fealty to the King of France (the border area has been in dispute from time to time). Therefore when Rochambeau was dispatched to America with his army to help Washington and the Continentals defeat the British, Wilhelm was ordered to go too. According to the history at Yorktown, Wilhelm and his Germans broke the British line at Yorktown leading to the surrender.
Read more
Helpful
Report abuse
See all reviews