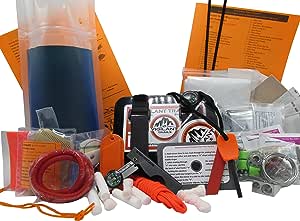 4.9 out of 5 stars
4.9 out of 5
16 global ratings
How are ratings calculated?
To calculate the overall star rating and percentage breakdown by star, we don’t use a simple average. Instead, our system considers things like how recent a review is and if the reviewer bought the item on Amazon. It also analyzes reviews to verify trustworthiness.

AEWheeler
4.0 out of 5 stars Great Kit! But Not Quite the Best
Reviewed in the United States on July 18, 2017
Verified Purchase
There's a lot to like about this little kit, but it is not the best pre-loaded little survival kit out there (I have kits by SOL and Gerber that seem more complete, but this one is close). I do have to say up front that I'm quite impressed with Vigilant Trails packing skills; they got a ton of stuff into this little metal case. Let's talk about what's great, first:

PROS
Number one, unlike the two kits I mentioned above, this one comes in a fair-sized metal case that seems to be made of steel (seems like it's 10 or 12 oz), which can be used to boil water at need, or cook. It also has two decent velcro straps and a clip-on button compass. The whole thing came sealed in plastic and it has a satisfying weight to it. This would not be a bad kit to just toss in your glove box, trunk, or backpack as a 'when you need it' solution.

There's a good little fishing kit (I'm interested in their larger fishing kits, they look solid) with a nice array of squishy lures. Mine came with three bright yellow corn-kernel rubber lumps and the pictured assortment of worms. Three triple-hooks, three small hooks, three small floats, two good leader-lines, and I really like their use of a thread bobbin as a spool for the fishing line. It also has six small and three medium lead weights.

I like that the kit comes with a p-38 can opener (you can never have too many of those), a scalpel blade (comes sealed in a foil package to keep it safe and sanitary), and a nice, big needle (3-inches) that's got enough heft to reliably do sewing repairs on heavy nylon fabrics in bags and tents. The kit also has a good quality signal mirror and fresnel lens.

I really like the full sized page printed front and back with useful survival information, and of course, it can be used as tinder in a pinch. I also like these two little rings they include with the sewing kit: they're like mini-keychain rings, about 1/4" in diameter, and seem like a nice touch.

The other components not mentioned below are all good enough for a kit like this, and don't really need any special mention. The only one I feel needs explanation is the larger firesteel rod: Just looking at the photos, I assumed it was a big rod of firesteel, but it's actually a magnesium rod that has a 1/8" firesteel rod embedded into one side, so you can shave off slivers of magnesium for more punch when starting your fire. The smaller rod is all firesteel.

CONS
The biggest shortfall for this kit is the knife. Now don't get me wrong: it will cut stuff, so it can do its job. It IS a step up from the cheap blades you see in a lot of other kits. When I open the blade, it locks, but there's a good bit of wiggle. With a more solid blade, that wouldn't be a huge problem (although I am disappointed), but this blade feels like I could snap it in my fingers. Now this might not be the norm, I might have just gotten one that's slightly loose, but the knife as a whole just feels of lesser quality. I would not want to use this in a survival situation, so this was the first thing I swapped out (I traded in a Camillus AUS-8 blade with a thin profile).

Now, I realize that you have to make a lot of tradeoffs to build a kit like this; but 5-feet of paracord and 5-feet of snare wire seem short to me on both counts. I'd rather skip the paracord entirely and just weave a paracord net-like holder for the case and quadruple that length. And while you can set a couple of small snares with 5-feet of wire, I'd feel more comfortable carrying 10-feet or more, and it wouldn't take up much space. The cord and wire included both seem to be high quality, and my little coil of cord is a nice bright orange. For inside the case, I'd rather see 20-feet of kevlar thread, super useful stuff.

There are some things I just wish the kit had, but seem to have been left out. I'd rather have a few waterproof matches than a second firesteel. Despite having two steel strips for the firesteel rods, this kit doesn't have any kind of saw. The larger steel strip would be great as a three-inch length of hacksaw. I don't need a wire saw, but I think with the stuff I've taken out, it should fit, and would definitely be useful. The kit could also use a couple of boullion cubes, and maybe an electrolyte packet to mix with water for more effective hydration. I'm also missing duct tape; either a compact roll or a folded length of it, whichever will pack better. Plastic ties are good (and I'll do my best not to take out the four 6-inchers included), but duct tape belongs in every kit large enough to carry it (this was the second thing I put in mine).

Another waste of space is the plastic sheet. It's thin plastic, not even as durable as mylar, and it seems to be about a two foot square. It is a pretty bulky item in the kit, wrapping below and above everything else in the tin case. Now I know, that any survivalist could quote me a dozen good uses for a piece of plastic, but the kit already has a mylar emergency blanket that will be much better at doing any of those tasks. The sole exception would be if you're going to an area that is arid, and water might be difficult to find, the plastic can be used as a solar still to collect water. But even then, this piece of plastic doesn't seem large enough to serve well in that way. I also think the 'two is one' rule breaks down with a component like this; it is just unneeded bulk in the case.

BOTTOM LINE
I gave this kit four stars because despite my cons above, I really like the kit. With a little tweaking, this can become a must-carry. It also seems a little pricey for what you get, I think it would make more sense at around $30.

Photos: I tried to capture the detail of the larger ferro-rod and the knife, but I suck as a photographer. Hopefully they'll give you a closer picture of the items that can help you make an informed purchase decision.

Andrea Griffiths
5.0 out of 5 stars Great kit
Reviewed in the United States on March 4, 2014
Verified Purchase
Love this little kit. It has such a nice variety in a compact little package. This is perfect to stick in a backpack, day bag, car kit - really anywhere. I'm planning on getting another one for my son for his college dorm room
Read more
5 people found this helpful
Helpful
Report abuse

Jovanna Romano
5.0 out of 5 stars Perfect Fit for Hunting Trips
Reviewed in the United States on June 3, 2014
Verified Purchase
The Survival Kit included everything I could think of and more. The was small and compact, making it just right for throwing into an already stuffed hunting backpack.
Read more
3 people found this helpful
Helpful
Report abuse

Amazon Customer
5.0 out of 5 stars I'm very satisfied. Vigilant trails was able pack alot of practical ...
Reviewed in the United States on January 20, 2016
Verified Purchase
First off, the product came earlier than the expected delivery, thanks. As far as the actually product itself, I'm very satisfied. Vigilant trails was able pack alot of practical survival gear in a somewhat small metal container. This product is good for keeping in your vehicle as an everyday care (EDC). It would be ideal for a fishing\hunting trip. It would also be good in a 72hr kit as well. The gear in here, or at least what i need it for, is very practical. However, i did switch the knife out with a smaller knife of my choice. Overall, i really love this product, and id recommend to anyone that wants to order it.
Read more
2 people found this helpful
Helpful
Report abuse

MountainWarrior
5.0 out of 5 stars A MUST HAVE!
Reviewed in the United States on September 7, 2013
"I've probably purchased every so called survival kit on the market. I have only been impressed with this one. This kit is meant for survival (not entertainment). I carry this whenever I go out in the field (fishing, hunting, hiking). I've used the contents outside of survival situations and can vouch for their ruggedness. I'm completely satisfied and would highly recommend to those concerned about survival".
Read more
9 people found this helpful
Helpful
Report abuse

riwi
5.0 out of 5 stars great !
Reviewed in the United States on January 17, 2014
Living in Norway and spending a lot of time outdoors I used a lot of time to find a survival kit that could serve my needs in sub artic conditions. This kit is the best kit on the market in my opinion. Top service from the seller , they even customized my kit to fit my needs. Great job . I ended up buying 2 and purchased their first aid kit as well. Recommended!!
Read more
6 people found this helpful
Helpful
Report abuse

JJ Johnson
5.0 out of 5 stars A great little kit for the money!
Reviewed in the United States on September 19, 2013
I am a former military survival instructor and had the opportunity to review this survival kit recently. I found it to be a great little kit that certainly contains some life saving items. With the right knowledge of how to use the items this kit could definitely save your life if you found your self having to make an unexpected stay overnight in the wilderness. For the money I don't think you will find a survival kit that contains such a wide variety of useful items.
Read more
2 people found this helpful
Helpful
Report abuse
See all reviews