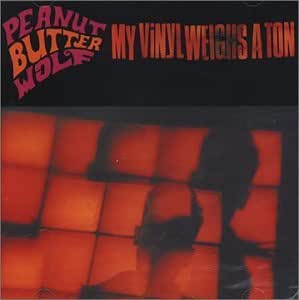 My Vinyl Weighs a Ton

Bringing together the many artists Peanut Butter Wolf has worked with over the years, My Vinyl Weighs a Ton is a veritable who's who of Left Coast talent. Integrating pyrotechnic lyricism from Cali MCs like Rasco, Planet Asia, and the Lootpack with the finest in turntablism skills around the world, the disc challenges both the hegemony of East Coast hip-hop and elevates scratch DJing to its rightful place at the center of rap music's revival. Underneath it all are Wolf's infectious grooves and vibrant soundscapes, which manage to be at once diverse and consistent. Here's one big bad wolf you don't need to be scared of. --Oliver Wang

ONE OF THE MOST IMPORTANT HIP HOP RECORDS OF OUR GENERATION! HHC

4.0 out of 5 stars
4 out of 5
21 global ratings
How are ratings calculated?
To calculate the overall star rating and percentage breakdown by star, we don’t use a simple average. Instead, our system considers things like how recent a review is and if the reviewer bought the item on Amazon. It also analyzes reviews to verify trustworthiness.
Top reviews

SaltyDog
5.0 out of 5 stars Break beats
Reviewed in the United States on June 26, 2019
Verified Purchase
Classic material...if you want soundtracks with lyrics, this probably isn't the album for you, but if your a true hip hop head, and dont mind a few break beats amongst the other track, then this is the album for you. I feel like this is an album for DJs and true hip hop heads.
Read more
One person found this helpful
Helpful
Comment Report abuse

Jared shoegazeTop Contributor: Guitars
3.0 out of 5 stars music great, rapping hate
Reviewed in the United States on April 17, 2014
Verified Purchase
the rapping is amazing in how bad it is. maybe he should of come to the east coast and got people to rap over it, cause the rapping blows....BIG TIME. near parody at times. but the music is good, though the last time I heard it that was even less appealing that before. it has taken on a life of it's own as this masterpiece, and it's not, but it's worth hearing if you love rap/hip hop, to make up your own mind,
Read more
Helpful
Comment Report abuse

JM Showalter
5.0 out of 5 stars The best of the 'turntablist' albums....
Reviewed in the United States on September 6, 2000
This is one of the tightest albums that I've ever heard. If you've never heard of Peanut Butter Wolf (which essentially means that you're from the East Coast), go and find an MP3 or something.... because he's probably as good as it gets for people who produce what could be called hip-hop.....
The title of this album is a shout to Public Enemy and a reference to the great phallic object of DJs, his record collection. This is a smart record with great rappers: when he's producing, he lets them rap and only does a lot on the tracks that are instrumental, which, of course, are amazing....
This is a rabidly funny album and a must for people who listen to stuff like Handsome Boy Modelling School (or anything with Prince Paul or Automator) or of good West Coast rappers (Quasimoto and Rasco are on this) or hip-hop in general, get this.
It's real good stuff.

Tuba Gooding Jr.
5.0 out of 5 stars Peanut Butter that doesn't stick to the roof of your mouth
Reviewed in the United States on February 23, 2004
One of my top ten all time favorite c.d.s. This album is so good that I have a copy! I mean the songs are well done, the selected artists are only the best, because PBW knew exactly who he wanted on the roster. Rasco, Planet Asia, Lootpack, Biz Markie, Kazi, Mr. Dibbs, the late Charizma(r.i.p.), DJ Babu, Zest, Pablo, Dave Dub, and a load of DJ's smart enough to beat children at spelling bee's. "Casio" is my favorite track, as he displays his talents on the tables of fables. All of the tracks are worth playing at least 60-100 times. Literally.
Buy it, steal it(not really), burn it, borrow it, doesn't matter, but own it. Go on I'm waiting.

Amazon Customer
4.0 out of 5 stars worth the money
Reviewed in the United States on February 28, 2000
Peanut Butter Wolf's compilation is refreshing for two reasons. First, with Rawkus artists claiming to represent 'underground' hip-hop yet lining up to sell out, it's nice to hear a west coast DJ bring it for real with a comp that is increasingly catchy and innovative. Second, Wolf is adept at creating music that makes otherwise lyrically challenged artists come off as straight dope. Planet Asia, "rocking baggy like a skata," particularly benefits from Wolf's beats, but others, including Quasimoto, are provided with a formidable musical forum from which to display their skill. This CD is a classic hip hop success in the sense that you have to hear it a few times to feel it. Once you understand where everybody's coming from, you'll dig it. "Rock unorthodox" is a strong track, but each of these cuts is impressive and fun and, thus, true to the artform. Until April 11, when Del's "Both Sides of the Brain" is rumored to drop, PB Wolf is a worthwhile apetizer. This CD can't be rated a five star, though, because the lyrics simply aren't going to make you bust out laughing, make you think, or challenge you to figure them out. That's NOT to say the mcing is weak, it's just to say it's not extraordinary. Again, PB Wolf's beats make these artists come alive. Piece n Chicken.
Read more
9 people found this helpful
Helpful
Comment Report abuse

Dsc
5.0 out of 5 stars Geez, this is tough.
Reviewed in the United States on December 22, 1999
It's hard to describe exactly how good this CD is or exactly WHY you have to get it. Simply put, with all the hip hoppers out there talking about Gucci this and Lexus that, PB Wolf and the underground guests on this album know what it is in life that really matters: Beats and skills. This album has quite possibly the tightest production values I've heard in a while, without sounding too polished like Nas or something from the Trackmasters. This album is just too good to describe. Just go buy it and listen for yerself.
Read more
13 people found this helpful
Helpful
Comment Report abuse

T Wreck
5.0 out of 5 stars DAMN
Reviewed in the United States on February 19, 2000
"My Vinyl Weighs A Ton" is one of the most solid hip hop albums of the 90s. The skits are hilarious, the beats are phenomenal, he features some of the best MCs around, and, thanks to guests like Q-Bert and Kid Koala, the quality of the cuts is mindnumbing. My favourite tracks on the album are "In Your Area", "Styles, Crews, Flows, Beats", "Rock Unorthodox", "Keep On Rockin It", "Breaks Em Down", "Tale of Five Cities", and "Phonies". Although very few tracks on the album feature Peanut Butter Wolf, and no one else, he certainly shows his skills. In short, this album is exceptional in every way, and shouldn't be slept on by anyone. Also pick up the album from label mates Lootpack.
Read more
One person found this helpful
Helpful
Comment Report abuse

John Neal
4.0 out of 5 stars Excellent but maybe not what you think?
Reviewed in the United States on February 2, 2000
I have come to love this album, but I have to admit it was not what I expected. Having heard PB Wolf's "The Chronicles" from "return of the DJ, Vol. 1," I was expecting non-stop frenetic turntablism throughout. However, PB Wolf takes a more low key approach here. He takes center stage a few times (along with some guest DJ's like Babu), but for the most part he puts together nice beats and lets the guest MC's do their thing. The result is an album that's probably better than what I had imagined I was buying. But it does seem worth it to mention to potential buyers that this is not just an exhibition of competition style turntable spinning. Another similar album that is also very good is "World Famous Beat Junkies Vol.2" featuring DJ Rhetmattic.
Read more
One person found this helpful
Helpful
Comment Report abuse
See all reviews