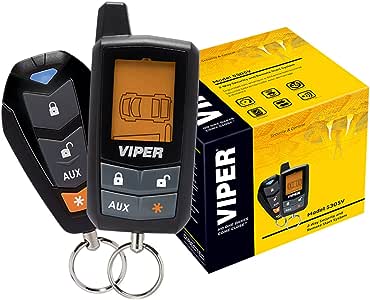 This unit is manufacturer Quality Refurbished , Unit appears in a white box, and is guaranteed to work perfectly. This Unit Comes with ALL accessories supplied by the manufacturer. This item does not come with installation instructions or wiring diagrams and requires professional installation. Some vehicles may require extra parts, sold separately.

4.3 out of 5 stars
4.3 out of 5
203 customer ratings
How does Amazon calculate star ratings?
Amazon calculates a product’s star ratings based on a machine learned model instead of a raw data average. The model takes into account factors including the age of a rating, whether the ratings are from verified purchasers, and factors that establish reviewer trustworthiness.

Cwracing2000
4.0 out of 5 stars Beautiful
Reviewed in the United States on July 12, 2018
Style: 5305VVerified Purchase
Always good quality from DEI, works as advertised clear installation instructions. I added SmartStart to the system. Also got a bit writer to customize the alarm system.
Read more

Titus Thomas
1.0 out of 5 stars Good for alarm only
Reviewed in the United States on June 12, 2018
Style: 5305VVerified Purchase
Alarm works fine but remote start won't stay running for longer than 3 4 secs and if it does start it won't shut off by key or brake. Paid 275 to have professionally installed even had to run a relay and it still doesn't work properly
Read more
23 people found this helpful
Helpful
Comment Report abuse

Flyin'Hawaiian
4.0 out of 5 stars Excellent alarm, decent remote
Reviewed in the United States on January 21, 2020
Style: 5305VVerified Purchase
So, I've been installing security systems and car audio since the early 80's. I've owned a car audio shop for several years, and was an installer for many more before then. This alarm is not for the faint of heart if you want all the bells and whistles, but if you're above average with auto electrical systems, you shouldn't have too many problems installing this system.
The biggest problem here is that it does NOT come with installation instructions, and you WILL need to use your google-fu to find a copy of it online! No, you cannot get it from Viper unless you are an authorized installer of DEI products, so don't even bother contacting them for it! Believe me, the instructions are online, but its not easy to find!
On to the installation! Its pretty standard fare here, with all the normal connections you'll need to do for a reliable alarm. Want remote start? Why wouldn't you? Its available, so why not install it? Here's where your multimeter and test light will become your best friend!
I did this install in one day, including removal of the stock Toyota alarm system in a '97 4Runner, and to be honest, that just made the install easier since most of the basic stuff was there for me to tap into. Door lock/unlock triggers, pin switches for doors and rear hatch, hell, even the wires were run for the piezo chirp under the hood, which made it nice and easy to run the new siren!
Testing all of the starter wires weren't too hard and were all under the steering column where they should be, and the hardest part was tapping into several 10awg wires. No, I don't ever use T-taps, this install was purely cut/solder/heatshrink all connections and it took much longer than necessary to make sure it was all done correctly and without questionable connections! I have always said, this is what sets good installers apart from great installers!
Programming wasn't difficult, even without a bitwriter, alhtough it would have been nice to really change all of the settings, rather than what DEI allows you to change by key and button programming.
All the settings work quite well, range is phenomenal at easily a half mile when my son and I were screwing around with this alarm!
The only drawback is that 2-way remote. Its finicky and sometimes just does a reset when you hit the start button or disarm button. No reason why, although I suspect a bad solder joint for the battery tabs. Some day I'll open it up and re-flow the solder over them to see if that fixes the issue, but for now, it only happens once in a while.
Overall though, I'm happy with the alarm, and more importantly, my son loves having it in his 4Runner while at school. Nothing like knowing if someone's touching your vehicle from way deep inside a concrete building! Thankfully, he's not had to worry about that!

Eggie Aponte Jr
2.0 out of 5 stars Get the next higher viper, save the headache for 50 more $
Reviewed in the United States on April 6, 2018
Style: 5305VVerified Purchase
Not the greatest, I get about 20ft of range from it. Everything works rest except the range which is kind of obnoxious considering I have to go right next to the car to unlock or remote start it
Read more
16 people found this helpful
Helpful
Comment Report abuse

Andrew
5.0 out of 5 stars Great buy!
Reviewed in the United States on February 14, 2020
Style: 5305VVerified Purchase
Great alarm! Works from a far distance and the 2 way remote is amazing great way to just check if u actually locked your car or forgot just look at the remote to make sure its locked...
Very loud. And the remote goes off and showes you whats happening in case you are in the store and cant hear the car, you will hear your key going off.

I would call around to different alram shops if you plan on installing to see if your car will be able to use the remote start or if any bypass modules are needed. Or (in my case) a sacrificial spare key is needed to be left in the ignition. I opted out of the spare key and the remote start and just hooked up the alarm by itself but left the remote start in just in case i decide to add it later on down the road.

Overall 5 star great product for the price cant beat it. . .
Tip: read your owners guide and figure out all the lil tricks. So you dont accidently set it to valet mode like i did lol.
Read more
5 people found this helpful
Helpful
Comment Report abuse

Matthew
3.0 out of 5 stars Its okay. It doesn't work from far away.
Reviewed in the United States on February 8, 2018
Style: 5305VVerified Purchase
You will need to have a good working battery for the remote start to work properly.
The remote start doesn't work from far away, which sucks. Honestly, would prefer just to spend the $40 for the system without the remote start. The alarm works well though.
Read more
13 people found this helpful
Helpful
Comment Report abuse

coleman
3.0 out of 5 stars well you should just go to your local installer if you have a newer car....
Reviewed in the United States on December 19, 2016
Style: 5305VVerified Purchase
so heres the issue. yes this can be installed in almost all automatic cars but make sure you dont need something like the dball2 to bypass your immobilizer that you did not know you car had.......and that would not be an issue what so ever if the dam thing did not need programming. so now you ask yourself why do i down rate this product because of my mistake? and here's why, if you call viper and tell them you bought their product on amazon everything help and all goes right out the window. they know this product will not be supported by the manufacture and they fail to advertise that. Also they fail to advertise that this may need more then just this to make the unit work. so at the end of the day because viper is terrible at helping the individual i have to down rate this a little because the seller know this will not be supported. im sure this will work fine for some one with lots of wiring skills (i do) and a older car with out an immobilizer (i dont) and now i have to have it installed any way haha. research is key here
Read more
27 people found this helpful
Helpful
Comment Report abuse

oscar
1.0 out of 5 stars cheap
Reviewed in the United States on September 2, 2018
Style: 5305VVerified Purchase
not so well i cant can tell if its original equipment or not
Read more
6 people found this helpful
Helpful
Comment Report abuse
See all reviews from the United States

Page 1 of 1 Start overPage 1 of 1
This shopping feature will continue to load items when the Enter key is pressed. In order to navigate out of this carousel please use your heading shortcut key to navigate to the next or previous heading.
Back
Next
Pages with related products. See and discover other items: keyless start, alarms systems, car start, car system, Best Rated in Car Security Products, keyless start system