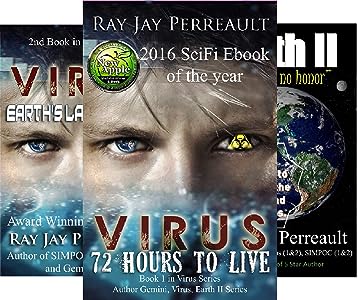 Virus/Earth II (6 book series) Kindle Edition
Virus/Earth II (6 book series)
Kindle Edition
by Ray Jay Perreault (Author)
Earth is invaded by a suspicious virus, and humanity is almost wiped out. During the chaos, two computers emerge, SIMPOC is programmed to help the survivors, and Julius has another agenda. He is programmed to remove all threats to him. Which includes SIMPOC and the remaining humans.
The virus devastates Earth and its space station Oasis. The moon and Mars colonies are left helpless, and warlords try to take over the United States.
SIMPOC, Space Station Commander Joan Herl, and Colonel Tom Herl follow Julius to confront the virus’s source. SIMPOC and humans want the virus to end. Julius wants resources to deal with those he feels are threats to his existence.
Earth’s survivors find themselves with the means and the need to defend themselves from Julius as he seeks resources to remove those who threaten him.

Read more
You've subscribed to Virus/Earth II! We will preorder your items within 24 hours of when they become available. When new books are released, we'll charge your default payment method for the lowest price available during the pre-order period.
Update your device or payment method, cancel individual pre-orders or your subscription at
Your Memberships & Subscriptions
There was an error. We were unable to process your subscription due to an error. Please refresh and try again.
5 titles below are free to borrow with a Kindle Unlimited subscription.
Price: $29.94 for 6 item(s)
Sold by: Amazon Digital Services, Inc.
Items included: 1 - 6
Books in this series (6 books) 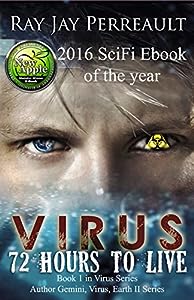 A virus attacks Earth. Who programmed it and why? Joan Herl works with the AI Computer SIMPOC. They face the virus and another AI who has its own agenda. Ultimately, they must face the source of the virus.

The President of the United States Arnold Patterson and the Chairman of the Joint Chiefs face the collapse of the government. The President loses his family to the virus, the government is attacked, and they must deal with a ruthless warlord.

Commander Joan Herl, Commander of the space station Oasis, her husband Tom and the remaining crew deal with the virus running rampant on the station and they must find a way to survive. They must also support the moon colony Desert Beach and the Mars colony Red Dirt, who are dependent on their support.

As everyone deals with the crisis, two glaring realities become apparent. One, there is an intelligent computer that is their only link to survival and two there is another computer that has a different agenda.

2
Virus-Earth's Last Battle
by Ray Jay Perreault (Author)
4.3 out of 5 stars (14)
This is book 2 in the Virus/Earth II series ("Earth II-You Have no Honor" is the next book in the series)

Earth was attacked by a suspicious virus (Bk1), the remaining survivors deal with the Post-Apocalyptic World(Bk2), then face the alien invaders(Bk3) and begin to explore the universe (Bk4).

SIMPOC, the advanced thinking computer, supports the remaining humans as they try to put their world back together. The other computer waits to remove the two threats to its existence; humans and SIMPOC.

They suspect the source of the virus, then their worst fear appears in their skies, and they face the end of the human race.

Book 3 in the Virus/Earth Series

Was Earth attacked and almost the entire population murdered because of ignorance?

Joan and Tom Herl, along with the thinking computer SIMPOC, must follow the evil computer Julius. Julius has one plan, and that is to get resources. They are surprised at their destination and realize something must be done to keep Julius from attacking Earth.

4
Earth II - Rebirth: Earth's first space-travelers must resolve which neighbor is a friend or a foe. (Virus Book 4)
by Ray Jay Perreault (Author)
4.1 out of 5 stars (8)

On their first trip outside the solar system, they find that their neighbors are friends and foes?

Humanity has dealt with the alien invasion and found themselves traveling among the stars. They find other alien cultures, some they can trust and some they can't.

More than 99% of the humans on Earth have died due to a suspicious virus from an alien invasion. A truce is finally worked out with the invading aliens. Still, now humans have thousands of space ships as reparations for the mistaken invasion.

The U.S. Government's remnants try to rebuild the world, but they encounter other aliens, some of whom may not be friendly. The rebuilding must be balanced with possible alien conflicts.

Julius, the A.I. computer that was part of humanity's original collapse, still lurks on the horizon. His only objectives are to eliminate the threats to his existence, the remaining humans, and the other A.I. computer SIMPOC.

5
Earth II - Julius the First: The A.I. computer Julius, must remove the two threats to his existence. SIMPOC, the other AI computer and the surviving humans. (Virus Book 5)
by Ray Jay Perreault (Author)
4.4 out of 5 stars (9)

Earth II – Julius the First.”
The fifth book in the Virus/Earth II Series

The AI computer Julius must resolve the two threats to his existence. The other AI computer SIMPOC, and the surviving humans.

In this post-apocalyptic story, Earth has survived an alien virus used to cleanse the planet before harvesting. As war reparations from their first alien contact, humanity was given thousands of spaceships and robots. The few survivors know they must adapt to survive. There is a new Galaxy beyond their solar system. They must be wary of their neighbors and Julius, an intelligent computer unleashed during the viral attack. Julius was programmed to deal with the two threats to his existence. SIMPOC, another intelligent computer programmed to help humans and the remaining humans. Julius also received a massive spaceship from the aborted attack on Earth. Still, he must find resources so that he can deal with SIMPOC and the survivors.
He must explore the Universe around him, manipulating and stealing to build up his arsenal. He has captured a significant human, but he hasn’t figured out who he is yet!
Be sure to check out the first four books in the series: “Virus-72 Hours to Live,” “Virus -Earth’s Last Battle,” “Earth II-You Have no Honor,” and “Earth II Rebirth.”

6
Earth II - Emergence: Earth Meets Its Neighbors (Virus Book 6)
by Ray Jay Perreault (Author)
4.0 out of 5 stars (3)
The sixth book in the Virus/Earth II series.
The evil computer Julius has kidnapped Tom Herl, and his wife Joan doesn’t know his fate. Thousands of robots and spaceships were given to Earth’s survivors, and they realize two things: first, they must prepare for Julius’ return, and second, they must find a way to exist with their celestial neighbors.
Earth can’t be caught in the middle of the conflicts around them. They find themselves in a balancing act in dealing with the Terest and Izod, two civilizations that have been battling and now both want Earth’s survivors to be on their side.

Kindle CustomerTop Contributor: Fantasy Books
5.0 out of 5 stars Kindle Unlimited Have all of these, bought or freebie ...
Reviewed in the United States on July 13, 2017
Kindle Unlimited

Have all of these, bought or freebie days, all of them in one way or another including freebies from instafreebie or whatever and in some cases 2 sets that have some of the same books overlapping.

Also {SIMPOX box set is books 1 & 2}, singles, and possibly other box sets and other books of course
Read more
Helpful
Report abuse
See all reviews
More About the Author 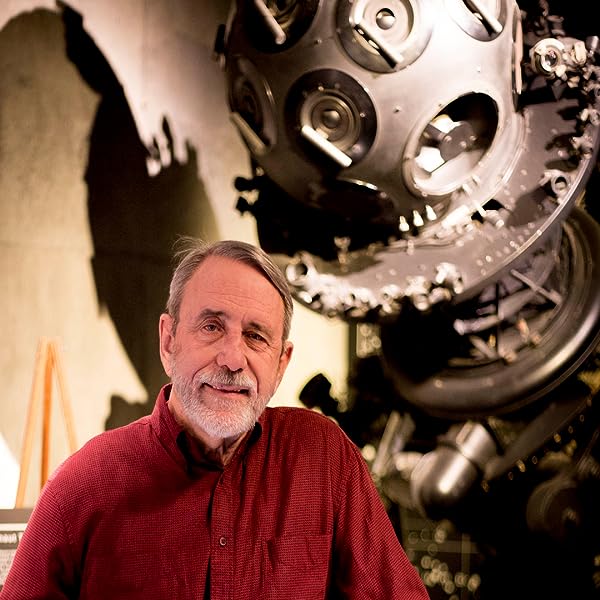 
Ray was born in New Hampshire, received his Bachelor of Science in Aeronautical Engineering at Arizona State University. Now retired from an influential, multi-decade career in aerospace,
Bringing a new voice to science fiction writing, Ray realized there was a niche that was calling him as he began to write deeper characters, create more sophisticated stories and realistic situations for Sci-Fi fans to relate to.

Initially attracted to heroic characters with powerful weapons taking on hundreds of aliens, Ray began his literary career with a desire to extrapolate Sci-Fi stories with a touch of everyday reality that most of us experience in work and our everyday lives.
His literary work is thoughtfully enriched by his decade long experience in the US Air Force where he flew C-130s on missions to 27 countries, and T-38s while training the best pilots in the world, as well as the first female US Air Force pilots.

During his 28 years at Northrup Grumman, Ray worked on some of the most top-secret military aircraft projects in the world including the F-23, F-35, B-2, Global Hawk and many more that can't be named.

He is grateful to his wife, Charlene and his two daughters, Christine and Robynn for their support on this new journey.
Read more
Back to top
Get to Know Us
Make Money with Us
Amazon Payment Products
Let Us Help You
EnglishChoose a language for shopping. United StatesChoose a country/region for shopping.
© 1996-2021, Amazon.com, Inc. or its affiliates