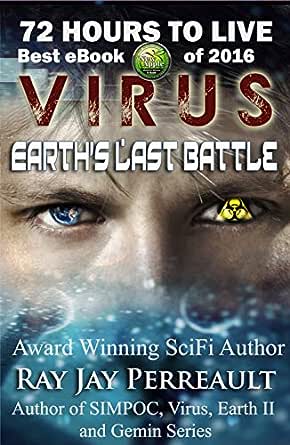 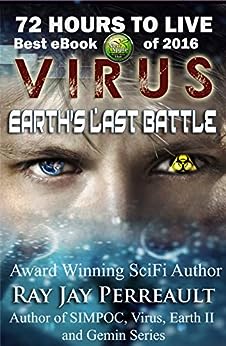 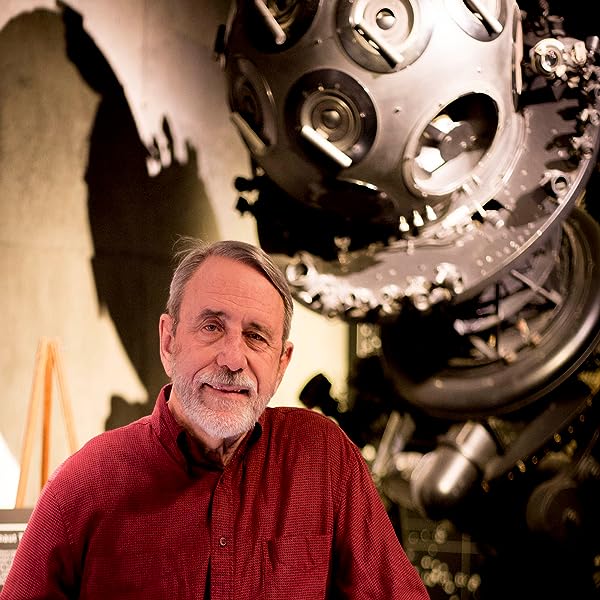 Kindle CustomerTop Contributor: Fantasy Books
5.0 out of 5 stars there is an intelligent computer that is their only link to survival and ...
Reviewed in the United States on July 12, 2017
Verified Purchase
Kindle Unlimited

Virus -72 Hours to Live
A suspicious virus that no one can explain hits Earth. The President of the United States Arnold Patterson and the Chairman of the Joint Chiefs face the collapse of the government. The President loses his family to the virus, the government is attacked, and they must deal with a ruthless warlord.As everyone deals with the crisis, two glaring realities become apparent. One, there is an intelligent computer that is their only link to survival and two there is another computer that has a different agenda.

“Virus-Earth’s Last Battle.” Second Book in the Virus/Earth II series
A suspicious virus has killed 99.99997% of the people. A ruthless warlord who moved into the White House attacks the Government at Camp David. The President moved the remaining government to an aircraft carrier in the Atlantic and left a military unit to deal with the warlord.
The decimated US Navy it is still functional, they must defend themselves from the remnants of militaries with a grudge against the US that uses the opportunity to get revenge.
Joan Herl and her remaining space station Oasis crew returned to Earth, and a computer playing by different rules attacked them. Their only ally was the first thinking computer SIMPOC and his surrogate named Alpha. Dr. Julius who was one of the moon colony crew members steals the research for thinking computers, and with his expertise, he creates another computer that rivals SIMPOC and who starts making its own plans.
Eventually, they all find out why the virus started and who is responsible.This book contains the SIMPOC-Human Remnants story as one of the supporting characters.

Maiden Hanna
4.0 out of 5 stars Post-Apocalyptic Military Sci-fi
Reviewed in the United States on November 21, 2017
Verified Purchase
Very fascinating telling of survival of the human race after a major pandemic; the heroes and villains each struggle to cope with the disaster. And the introduction of two cutting-edge new supercomputers and the relationships between the computers and humans.
Read more
Helpful
Report abuse

Trollhair
3.0 out of 5 stars Yikes!
Reviewed in the United States on June 15, 2018
I am being nice giving this book three stars. I should give it 1.5. This storyline was all over the place. Before linking groups that could or may have contact with each other, he adds another scenario that doesn't belong.
People on the Moon. People on Mars. The President. The bad guy. The bad guys second in command taking over. The computer programmer. Another computer programmer. The main computer and his sidekicks. The Navy. Other countries Navies. Aliens. I can honestly say I do not know what the plot actually is.

The author seriously needs an outline and a plan for his book. Also, Mr. Permeable, after you finish writing it, sit down and read it out loud. Grammar and vocabulary. I do not like writing bad reviews but this book has me baffled
Read more
2 people found this helpful
Helpful
Report abuse

Nancy Osborn
5.0 out of 5 stars Excellent!!
Reviewed in the United States on January 20, 2019
I was pleasantly surprised by this gripping and intelligent story. I stumbled upon it and I'm glad I did. It was one of those "hard to put down" books. There's no greater education in science than a well written and thought out book with real science behind it. Excellent! Highly recommend!
Read more
Helpful
Report abuse

Pamela Eskridge
5.0 out of 5 stars A few wow moments
Reviewed in the United States on July 30, 2019
Interesting reading. Aliens! Wow that was so unexpected. I'm wondering what the outcome will be. Can the survivors defect a enemy they know nothing about.
Read more
Helpful
Report abuse

CMPBallester
5.0 out of 5 stars Required reading in the dawn of artificial intelligence.
Reviewed in the United States on March 11, 2018
The scenarios presented and the actions the characters take are so likely that these books should be made required reading for a wide range of forward-thinking college-level courses on topics such as artificial intelligence, cyber-warfare, disease control, and disaster recovery. This is not just entertaining, but it is mind-expanding reading. Kudos to the author.
Read more
Helpful
Report abuse
See all reviews