Visions of Heaven and Hell Bunyan’s original title: My Sojourn to Heaven and Stopover in Hell) Edition, Kindle Edition 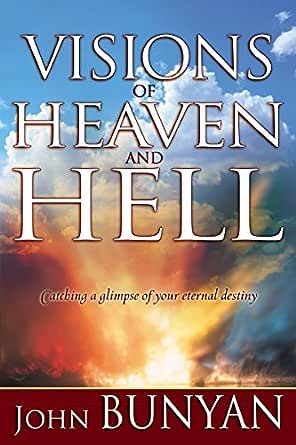 Flip to back Flip to front
Audible Sample Playing... Paused   You are listening to a sample of the Audible narration for this Kindle book.
Learn more
ISBN-13: 978-0883685419
ISBN-10: 0883685418
Why is ISBN important?
ISBN
This bar-code number lets you verify that you're getting exactly the right version or edition of a book. The 13-digit and 10-digit formats both work.

Are You Ready for Eternity?
Through this John Bunyan classic, you will experience his vision of our heavenly paradise, as well as find answers to difficult Bible questions about life, death, heaven, and hell. In these enlightening pages, you will discover how to:

Prepare now so you can look forward to the benefits and pleasures of heaven that await you! --This text refers to an alternate kindle_edition edition.

John Bunyan was born in Elstow, England, in November 1628. Two times his life was spared, once when he was in the army and a soldier who took his place in battle was killed, and once when he fell out of a boat and nearly drowned. He believed, and the world can testify to the truth, that God spared his life for a special purpose.


A few years after he married his first wife, she died, leaving him with four young children. Four years later, he married his second wife, Elizabeth. By this time, he had published two works and was formally recognized as a preacher.


On November 12, 1660, he was scheduled to preach in the little town of Lower Samsell. When he arrived, he was informed that a warrant had been issued for his arrest. Unwilling to denounce his Christian faith and his calling to the ministry, he was imprisoned for twelve years. Among the many writings he published during his imprisonment are The Holy City, Grace Abounding to the Chief of Sinners, and the most famous, The Pilgrim's Progress.


After his release, he continued to write and publish stirring works that have endured through time. Among these classics are The Holy War, Visions of Heaven and Hell, and Journey to Hell: The Life and Death of Mr. Badman. After traveling through a rainstorm in an effort to reconcile a young man and his father, Bunyan died on August 31, 1688, and was buried in Bunhill Fields.

4.6 out of 5 stars
4.6 out of 5
78 global ratings
How are ratings calculated?
To calculate the overall star rating and percentage breakdown by star, we don’t use a simple average. Instead, our system considers things like how recent a review is and if the reviewer bought the item on Amazon. It also analyzes reviews to verify trustworthiness.
Top reviews

D. Cleaveland
1.0 out of 5 stars Not authentic writing of John Bunyan
Reviewed in the United States on May 10, 2019
Verified Purchase
There are doubts regarding authenticity of this book. It is unlike any of John Bunyan's other writings and if you read the review with the three stars, you will read more of the evidence John Bunyan is not the author of this book. It apparently, was written by someone that took some of John Bunyan's sermon statements and added their own opinions that are not considered sound doctrine for a Christian believer. In researching this book, I found sites that considered those that endorsed the book to have "itching ears" because the book contains situations not in keeping with God's word.
Read more
6 people found this helpful
Helpful
Report abuse

Virginia Grace
1.0 out of 5 stars NOT HIS BOOK
Reviewed in the United States on October 21, 2019
Verified Purchase
This book was unbiblical, lots of made up stuff which contradicts the bible, because the Spirit and the Word always agree. You will not need much discernment to see that this is true.
This book not listed under any of his works and was written after he died. Also because we live in the end times, we know this kind of knowledge was not given in the 1600's. Only during the end-times has knowledge increased. The first person I ever read of visiting hell or heaven was in the 70's by Mary K. Baxter, she was the pioneer and Jesus said she was.
Other spirits visit people, if you do not know your scriptures you will fall for this kind of deception easily. The bible says to rebuke the devil and he will flee.

Alex F. Koch
5.0 out of 5 stars Great Book
Reviewed in the United States on July 20, 2015
Verified Purchase
The first half of this little book John Bunyan takes you up to Heaven and shows you around. Most of Heaven we cannot understand while we are in these earthly bodies, so it is a very limited trip. The second half you are taken to Hell and he shows you some of the horrors of Hell. Such as, what makes Hell, Hell? Answer: it is eternal, forever, you never get out, and you will have a mind that remembers. You do not want to go there!

Romans 10:9
That if thou shalt confess with thy mouth the Lord Jesus, and shalt believe in thine heart that God hath raised him from the dead, thou shalt be saved.

C. Page
5.0 out of 5 stars Heaven and Hell are real
Reviewed in the United States on June 19, 2021
Verified Purchase
The information in the book agrees with the witness written by so many other writers concerning what God revealed to them about the real existence of Heaven and Hell.
Read more
Helpful
Report abuse

Kindle Customer
5.0 out of 5 stars Powerful
Reviewed in the United States on August 7, 2019
Verified Purchase
Everyone should review this book which strengthens faith. I found it helpful, even though the section about evil is difficult to read.
Read more
2 people found this helpful
Helpful
Report abuse

Christopher E. Herron
5.0 out of 5 stars Heaven and he'll are real
Reviewed in the United States on January 28, 2020
Verified Purchase
Powerful book. Billy Bray read this book in 1823 and the Lord used it to change his life. Jesus is real.
Read more
2 people found this helpful
Helpful
Report abuse
See all reviews

R. SUTTON
5.0 out of 5 stars The Pilgrim Progressed!
Reviewed in the United Kingdom on May 14, 2017
Verified Purchase
This book is astonishing, heart-rending, spiritually evocative and thoroughly biblical in its exploration of the facets and nature of heaven and hell. Bunyan's writing is so steeped in biblical depth and understanding that it is hard to imagine how he attained such understanding. I have never come across an author with such a deep and clear understanding of the 'Song of Solomon'; able to relate its content to the Gospel whilst shedding light onto this often misquoted and misunderstood book as he masterfully weaves biblical truth into this extraordinary story. This version has numerous, but by no means exhaustive, references to specific Bible verses and passages marked throughout the text to help identify Bunyan's biblical inspiration and teaching and allowing for personal cross-referencing and further study and contemplation. Great writing. Well presented edition.
Read more
One person found this helpful
Report abuse

Nes T
4.0 out of 5 stars A thought provoking read.
Reviewed in the United Kingdom on May 31, 2015
Verified Purchase
To really know John Bunyan you must go beyond his classic Pilgrim's Progress and delve deeper into his further works.An insightful, thought provoking read.I wonder what he would make of these days!
Read more
One person found this helpful
Report abuse
See all reviews