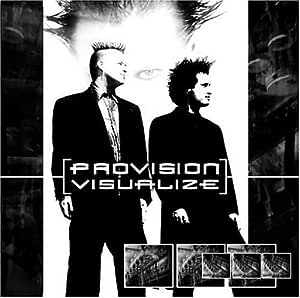 This is Provision's second album, and the first on A Different Drum's label. The first 1000 copies of the album come with a bonus disc featuring exclusive remixes and two exclusive songs not on the regular album. Provision has become a shining light in America's synthpop underground, performing live shows with energy and frequency, winning new fans wherever they go. Their sound combines the flavors of synthpop underground classics like Red Flag, Cetu Javu, Moskwa TV, Celebrate the Nun, etc. with modern synthpop techniques for an uptempo, emotional, driving sound.

Daniel W. Kelly
5.0 out of 5 stars New Wave for a new Millennium--think Anything Box and Celebrate The Nun
Reviewed in the United States on June 2, 2008
Verified Purchase
Picking up where those bands and others like Boxcar and Cause & Effect left off at the very tail end of the synthdance movement of the 80s, Provision seems to use the exact same drum machines and synthesizers that were used back then, unlike modern bands like Shiny Toy Guns, Dragonette, and theSTART, who are bringing 80s influences into new music but using modern technology and sounds.

This is straight up 80s synth wave. If you miss that exact sound, then do not miss getting the only 3 CDs released by this band. Also try a taste of Neuropa, a band who uses this same exact formula.

TheOpolis
4.0 out of 5 stars Great Synth Album!
Reviewed in the United States on June 26, 2009
Verified Purchase
This is Provision's 2nd studio album and probably one of the most hardest working bands out there as their fans don't have to wait years for them to release a new album. Best tracks are: "Could've had it All"; "Chemistry
"; "Destiny" and "Flood of Emotion", which is probably my favorite track, next to Could've had it all. Their bonus disc has some good material on there too but only two tracks seem to take my interest. Also, look into their "Could've had it all" cd single, which has some nice remixes on there!
Read more
Helpful
Comment Report abuse

glen shaun barney
5.0 out of 5 stars They sound very good
Reviewed in the United States on May 4, 2019
Verified Purchase
I love this CD its my favorite electronic synthpop and future pop ban
Read more
Helpful
Comment Report abuse

EMqube
5.0 out of 5 stars You can't imagine how good this is until you hear it
Reviewed in the United States on September 19, 2009
Not only is the entire album amazing from beginning to end, but the bonus disc is packed with great remixes and two extra tracks. The 2 bonus tracks, Replicate and Insecurity, are tremendous, reason alone to buy the cd.

The range of emotion on Visualize is stunning. From killer dance floor tracks to emotional electro tunes that make you think, you will be hard pressed to find many albums of this caliber.

The writing, composition and intensity will blow you away.

Of all the albums in my collection (over 1,000) this is one of the most solid and complete from open to close.

If you like Depeche Mode, Anything Box, New Order, Information Society, Red Flag, Celebrate the Nun, Cetu Javu, Seabound, or any music that relies on intense melodies, driving percussion, emotional vocals and strong songwriting then Visualize is definitely for you!

A must buy for any Electro fan.
Read more
One person found this helpful
Helpful
Comment Report abuse

shervin nooshin
5.0 out of 5 stars VISUALIZE !!!!
Reviewed in the United States on September 14, 2004
PROVISION-VISUALIZE (2CD)

SUPERB follow up to their debut (Evaporate) that totally blew my mind a few years ago. I first heard of Provision on ElectroGarden, where my jaw hit the floor the second I heard the tracks "Sacrifice" among others. This is a band that makes me so proud of being from Texas. Blending old school synth sounds similar to the likes of Red Flag, Anything Box and Cetu Javu with the modern progressive dance style similar to Icon of Coil, this band is no stranger to the scene. They have a UNIQUE sound that STANDS OUT !!! Lyrics that touch you deep in the heart about love, lust, betrayal, loss and pain only to be delivered by the most amazing, intense and melodic style vocals that at times brings tears to my eyes and a huge smile on my face. Every track on this album is a SMASHING HIT!!! Second disk is filled with GREAT remixes from the likes of Hajas, Fr/Action, Glow, Halovox, Rename and others.....

One of the best releases of 2004 !!
Read more
3 people found this helpful
Helpful
Comment Report abuse

A writer's first challenge is to find the perfect topic, so I went with the tried and true standard and decided to write about what I know best. The Houston-based band Provision has created a new synth movement which is taking over the airwaves and club scene. I have been a Provision listener since the beginning and the tours in Texas are stuck in my memory for life.

I did not know what to expect when I first received Provision's latest album, "Visualize" but I had vividly enjoyed the "Evaporate" album. The synth strings and beats that invaded my ears and my mind caused tears. I was not sure if the new album was going to have that emotional connection with me or not.

"Visualize" starts off with the track "Could've Had It All." I fell in love with this instantly, on the first listen. Clearly, as I decided to do when writing this article, the band stuck to what they know, writing about love, lust, vengeance. However, musically this album has an evolved sound from their two previous albums "Devotion" and "Evaporate". The band has experimented with new synthesizers and samplers, but still manage to give us the Provision sound we have all grown to love.

This album is full of the emotion that is expected of Provision. The sound invades my mind and makes me want to dance and move and sing along with them and I hope to see more albums like this from Provision. "Visualise" is full of passion and emotion that makes this a staple in any Synthpop (underground) collection. The songs that stuck me emotionally are "Neverending", "Flood of Emotion" and "Untrue". They truly spoke to me and provided the emotional reaction I was seeking in this music.

The first 500 copies of "Visualise" feature a bonus disc with remixes by Cloudless, Halovox and other up and coming as well as established artists. The bonus disc also features a few unreleased tracks exclusive to this disc, such as "Replicate" and "Insecurity."

Normally I don't care for remixes but "Flood of Emotion (Rename Mix)" and "Untrue (Glow Mix)" are exceptions to this policy. They are both sensational songs on their own, made better by the great artists that remixed them. I hear sounds in this album that I have never heard in any other synthpop (underground) album before. Provision has taken their music to new levels. This will bring them more loyal and frequent fans.

If you have not already obtained this album, I highly recommend that you do so! It is well worth having in your collection. All of the songs on this album are great ones, and like me you will be unable to stop from playing it repeatedly.