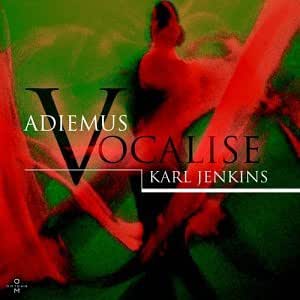 On Vocalise, the fifth installment in his Adiemus series, composer Karl Jenkins presents his first discernable lyrics (an invocation sung in English on "The Protector") and his first arrangements, quite eclectic, of classical repertoire (imagine a movement of Beethoven's 7th symphony recast as a tango). We also experience brief encounters with jazz guitar (from Martin Taylor), improvisational saxophone (Nigel Hitchcock), Middle East incantations, even backwater harmonica. It is indeed a jumble, and at times Vocalise (i.e., "wordless song") evokes impressions of intermingled jigsaw puzzles where an abundance of pieces never quite coalesce into a whole. Jenkins' most distinctive audio element, his exuberant Munchkins-from-Africa choir singing in a nonliteral phonetic language, is again on display and is best appreciated in small doses (vocalist Miriam Stockley, a centerpiece of early Adiemus works, does not take part). Jenkins' most affecting pieces on this CD are among its quietest: the slow-building "Bendigedig" ("blessed" in Welsh, Jenkins' native tongue) and the title track, a reverent reworking of a Rachmaninov composition of the same name. Even with all its stylistic side trips, at 68 minutes fans should be able to cherry-pick enough highlights (such as the breezy frolic of "Schubert's Dance") to find contentment with this disc. --Terry Wood

tehuti_88
3.0 out of 5 stars I tried to like it, honest.
Reviewed in the United States on August 20, 2005
Verified Purchase
I absolutely adore Adiemus's first and second albums, really like the third, and the fourth is all right. So I was really looking forward to this one. Unfortunately, I was quite disappointed. I thought perhaps I would warm to it in time but so far that hasn't happened. (I purchased it when it first came out--advance order. That's how much I was looking forward to it.)

The only song I truly like on the album is "Bendigedig," which sounds like it could have come from "Songs Of Sanctuary" or "Cantata Mundi" with its singing and soaring orchestral sound. Oddly, I also kind of like "Boogie Woogie Llanoogie" (nobody hurt me), but it's definitely not what one would expect from Adiemus. The two pieces for "Schwanda" are cute but strangely, do not feature bagpipes--and are very short. The rest of the music is, unfortunately, forgettable. I do NOT like the coherent lyrics because a big part of the enjoyment of Adiemus is being able to make up your own meaning for the songs--and a lot of the music on this album seemed to have an oddly Christian or religious-sounding bent. When I put this CD in, rather than listening through all or almost all of the songs like I do for Adiemus 1, 2, and 3, I just listen to one track, and that's it.

It's nice how Adiemus changes their style every so often to try to keep things fresh--but would a return to the old style hurt so much by now? I truly miss the great orchestral sound and lyricism of albums 1 and 2 and, to a slightly lesser extent, 3. Those three albums are what keep me coming back for more, even though albums 4 and 5 have rather been letdowns. Yes, Adiemus without Miriam Stockley is sad, but I think they could do just as well without her...if they went back to their old musical style at least once more! "Bendigedig" proves that. If only more of the songs on this album did.

Here's hoping that Adiemus 6, whenever and whatever it should be, is better...

J. G. Whitemyer
4.0 out of 5 stars Making Arrangements
Reviewed in the United States on November 9, 2006
Verified Purchase
I would have probably enjoyed this CD more if Sarah Brightman hadn't used the same formula several years ago. There's nothing wrong with making clever arrangements of classical themes, but that's all you'll find in this collection -- none of the exciting, original melodies for which Karl Jenkins is best known.

Don't get me wrong; I own and love Sarah Brightman's versions of these same themes. I was just hoping for something new.
Read more
One person found this helpful
Helpful
Comment Report abuse

Janet H.
3.0 out of 5 stars Disappointing
Reviewed in the United States on April 24, 2004
Verified Purchase
I am very disappointed in this cd. I love not only Adiemus, but all of Karl Jenkins's other works. This, however, is not up to his usual caliber. One example: the last track, Boogie Woogie LLanoogie, sounds like the soundtrack to chase scenes from episodes of "A Pup Named Scooby Doo." The only good track on this cd is number four, Dona Nobis Pacem Part I. None of the other tracks have the power of any of the tracks compiled on "Karl Jenkins: The Journey, The Best of Adiemus."
Read more
5 people found this helpful
Helpful
Comment Report abuse

❀Aimee❀ Just one more page...
5.0 out of 5 stars I love the entire series
Reviewed in the United States on January 19, 2013
Verified Purchase
I'm surprised these aren't very well known. The music and songs are just interesting and leave me feeling uplifted. Also interesting in that they traditionally don't use any real words - just sounds that sound like they could be words.
Read more
Helpful
Comment Report abuse

Freedom Sister
5.0 out of 5 stars Fabulous!!
Reviewed in the United States on January 3, 2011
Verified Purchase
I think this album is brilliant--awesome music!! Can't turn it off!!! Especially love Allegratango!!! Adiemus could sing to the sound of a washing machine and still sound good! Kudos!!!
Read more
Helpful
Comment Report abuse

Paulo Maua
5.0 out of 5 stars Unforgettable
Reviewed in the United States on January 29, 2013
Verified Purchase
In the hands of Karl Jenkins songs are different, much more beautiful and actually arranged with boldness and talent. I loved the CD. And more joy in playing music maestro Brazilian Heitor Villa-Lobos and the choir singing in Portuguese.
Read more
Helpful
Comment Report abuse

Ian Bibby
4.0 out of 5 stars Great
Reviewed in the United Kingdom on March 2, 2013
Verified Purchase
Another wonderful Jenkins album. Adiemus is always melodic, interesting, and solid entertainment, and i will willingly recommend it to anyone.
Read more
Report abuse

Angela
5.0 out of 5 stars Five Stars
Reviewed in the United Kingdom on May 2, 2016
Verified Purchase
Delighted with purchase
Read more
Report abuse