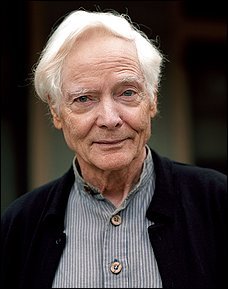 W.S. Merwin is one of America's leading poets. His prizes include the 2005 National Book Award for his collected poems, Migration, the Pulitzer Prize, the Stevens Award, and fellowships from the Guggenheim Foundation and Lannan Foundation. He is the author of dozens of books of poetry and translations. He lives in Hawaii, where he cultivates endangered palm trees.

K. Moore
3.0 out of 5 stars Interesting
Reviewed in the United States on May 27, 2017
Verified Purchase
(I'm annoyed with Amazon asking for labels related to plot. This book doesn't have a plot or characters, so ignore those please.)
This is a collection of fragmented thoughts, and I believe it's been suggested that they are the types of words you might overhear in the conversations of others if you are a good listener. Many are relatable regardless of time, location, or culture. It's very short in word count, but because the ideas take time to process, it takes longer to read than you might think. The translation is well-done, and the bilingual format is great if you are studying one or both languages.

Kara M. Schunk
5.0 out of 5 stars Amazing Book
Reviewed in the United States on January 15, 2016
Verified Purchase
Incredibly inspirational book of aphorisms. A life changing and perceptive book. It's a quick read that will leave you thinking about things. So succinct and powerful. You can write volumes on a single one of Porchia's aphorisms. There is much to explore in this little book.
Read more
2 people found this helpful
Helpful
Report abuse

Alarick
5.0 out of 5 stars Just Wonderful --
Reviewed in the United States on February 6, 2009
Verified Purchase
Emerson, Schopenhauer, Balthasar Gracian, Nietzsche, Lichtenberg, Whitman and more, --all in one.
Good translations, though, ones that say too much at times; the original spanish on the facing pages more than compensates. Intelligent introduction, in a stately printing quality befitting a writer who owned and operated a press himself. This is essential. It's amazing he's from the last century, --he sounds ancient.

Meera or sometimes Alex
1.0 out of 5 stars Not for me
Reviewed in the United States on August 3, 2017
Verified Purchase
Not inspirational to me, but perhaps. Others?
Read more
Helpful
Report abuse

Kevin Maynard
5.0 out of 5 stars Mini-masterpieces
Reviewed in the United Kingdom on November 23, 2017
Verified Purchase
Are these mini-prose poems or are they brilliant apothegms? Who cares? A unique voice, who deserves to be as well known among English-speaking readers as he already is in the Hispanic world.
Read more
Report abuse

Mr S A Moore
5.0 out of 5 stars Massively underrated.
Reviewed in the United Kingdom on June 1, 2019
Verified Purchase
Found out about this through Don Paterson’s superb aphorisms. Cheers Don!
Read more
One person found this helpful
Report abuse

A Customer
5.0 out of 5 stars Five stars
Reviewed in Australia on June 8, 2020
Verified Purchase
I enjoyed this.
Read more
Report abuse

Rahul Mishra
4.0 out of 5 stars Great aphorisms!
Reviewed in India on August 29, 2014
Verified Purchase
Aphorisms in the book are breathtakingly deep. It deserves no less than 5 stars but since the pages are falling off due to poor binding I have reduced 1 star.
Read more
Report abuse
See all reviews