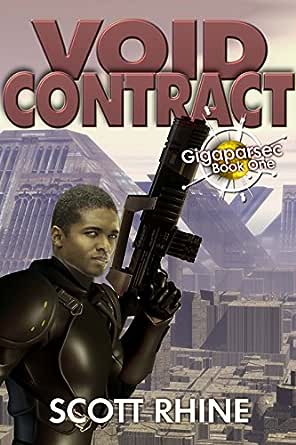 You've subscribed to Gigaparsec! We will preorder your items within 24 hours of when they become available. When new books are released, we'll charge your default payment method for the lowest price available during the pre-order period.
Update your device or payment method, cancel individual pre-orders or your subscription at
Your Memberships & Subscriptions
There was an error. We were unable to process your subscription due to an error. Please refresh and try again. 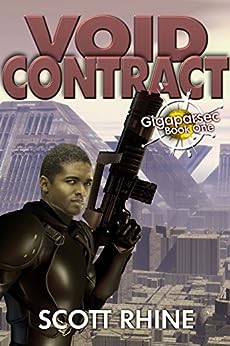 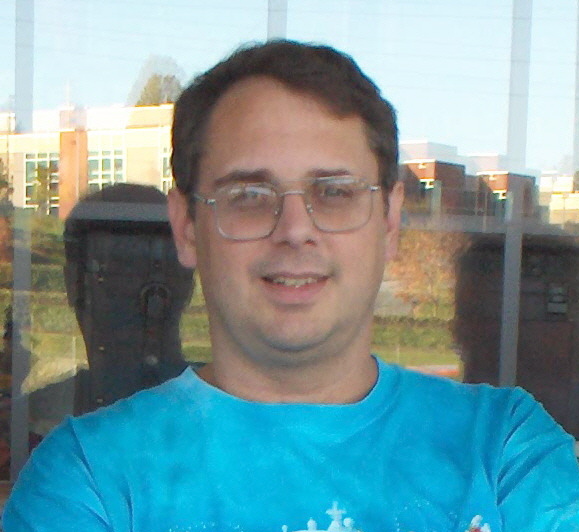 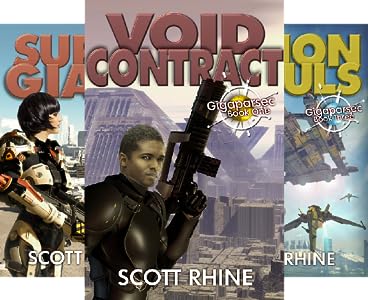 Max Culp is a man of his times. He represents the Gigaparsec War, the first armed conflict between members of the great Union of Souls.After the war, he hunts the Phibs whom he watched perpetrate numerous atrocities. Now that the revenge is over, Max puts together a crew of talented misfits of every species. In the tradition of 70's space-exploration fiction, we visit strange, new places and buy things from them, all while wielding blasters. The difference with Star Trek is that traveling five parsecs takes a month instead of a minute. The aliens and technology may appear in dozens of books, but the characters are well-developed, complex, and evolving. Each book in the series is told from the point of view of a different partner in Far-Traveler Unlimited. The last chapter gives us a lead-in to Roz, the chief engineer and pilot of the prototype craft. Her story is book 2, Supergiant. Book 3, Union of Souls, is from the POV of Reuben the Black Ram as he transitions from scoundrel to statesman. The finale is told by a Saurian.

Mike Whitfield
5.0 out of 5 stars Awesome read
Reviewed in the United States on May 31, 2020
Verified Purchase
This book never quite takes you where you think it’s going. The characters are varied and interesting, and unlike many with this many characters and this much action I never got them mixed up. All the characters are distinctive and the protagonists are very relatable - I very much wanted them to succeed. The alien species are distinctive as well, outlined in various detail as required for their part in this narrative. Relationships are intricate, often bound in conflicting, competing interests as people are pulled in different directions. All in in this is a remarkably complicated book, but one that flows smoothly from start to finish.

Highly recommended read, which is good since I didn’t finish (and thus didn’t finish) the three books I started immediately before this one. Now I’m off to buy the next and see where the story goes.

allen white
4.0 out of 5 stars Void Contract
Reviewed in the United States on July 25, 2018
Verified Purchase
It's been years since I've read much sci fi. At first I wasn't to sure about it but as I kept reading it got my interest and turned out to be a pretty good good.
Once I got into it, I read through it pretty quickly and now I'm curious about what happens next. So that shows that Scott achieved his goal!

Kindle Customer
1.0 out of 5 stars Not my cup of tea
Reviewed in the United States on April 27, 2020
Verified Purchase
Too much too soon. Storyline confusing and hard to follow. Didn't even get more than a few pages before I gave up.
Read more
Helpful
Comment Report abuse

ElWood
5.0 out of 5 stars Amazing!
Reviewed in the United States on January 3, 2016
Verified Purchase
There are so many great characters in this one. Action, adventure, budding relationships; this book has it all! Loved it.
Read more
2 people found this helpful
Helpful
Comment Report abuse

Note: I was gifted a copy of this work for an honest read and review. The following review, as with all reviews, is my personal opinion of the submitted text.

Writing Style – 3.5/5.0 (Good)
Once past the opening couple of chapters, I thought this had good flow and reasonable structure for the most part, but I expected a little more from the content.
To be fair, there is a lot in this, but the introductory section feels very fragmented and jumpy, as though written in sections and forced together.

After this, although the story settles, the reader is forced to make a lot of assumptions about the characters, as the descriptive is a little lacking in favour of events and situations.
In a text where the characters were given time to settle, this would never be an issue, but the nature of this particular beast doesn’t really allow for this, which sometimes makes the read feel simplified and a little shallow.

Character Development – 3.0/5.0 (Okay)
I found the majority of the main character group – all introduced at speed – only really developed in the meanest sense. Max and Reuben (as the central pairing) appeared the only exception – though I did feel that there were occasions even Max’s character was stalling.

In a way, this made it very difficult to connect with the characters. Yes, they fitted well into the story and played their roles, but for some it seemed they were going through the motions to allow Max to progress.
Even toward the end, where the ongoing central group becomes more defined, the characters seem to lack something realistic which holds them at arms-length from the reader.

A little frustrating when you can see the hard work done in other areas.

Descriptive – 3.5/5.0 (Good)
The descriptive had a tendency to be very up and down. Locations were beautifully drawn, battle scenes and atmospheric work was usually excellent. Unfortunately, very little descriptive surrounded the characters or their interactions with the events around them.
In fairness, when it was there, it was very good. When it wasn’t, the scene (as good as it was) felt like it contained very flat characters.

There were a few characters who really had little or no descriptive to them, including a few of the central characters, which did make them seem incomplete.

In a similar way, the dialogue occasionally felt disjointed from the action; as if nothing was happening while two or three characters were having a seemingly normal conversation. This, again, served to detract from a lot of hard work in other areas.

Language & Grammar – 4.0/5.0 (Very Good)
The editing level was very good. Yes, there were a number of ‘wrong’ comma placements (irrespective of your written language) and perhaps the odd word which made things feel a little too split between what we would consider normal terminology and the future sci-fi environment we were reading in.
Even so, word selection was very good and those pesky sci-fi terminologies were nicely introduced in a reader-friendly way.

Plot – 4.0/5.0 (Very Good) – VERY MINOR SPOILERS
I liked the central plot very much. To be honest, the sub-plots felt a little lacking and over-simplified, but they worked.
The mix of ‘aliens’, in their varied forms, made the story more interesting but also served to highlight the very typified central role of humans. This isn’t so much a criticism as an eye-roll. Nevertheless, this followed a nice, tried-and-tested formula.

General – 3.5/5.0 (Good)
There are genuine flashes of brilliance in this. The plot premise and the execution of a lot of the battle elements are excellent.
In the lulls between, things do occasionally appear to be a little too lax.
The cover art is excellent quality but doesn’t quite capture the essence of the book beyond. Whether this is detrimental to the sales is for others to determine.

All-in-all, this is a very enjoyable read. If you are happy to look past little niggles and just want a good sci-fi action romp, this is a definite option for you.
Sci-fi purists will feel a little frustrated with the descriptive issues, but genre fans will most likely enjoy this.

For me, this nudges its way toward a respectable 4 Stars, but I see this as more of a 3 and a half, with a reasonable recommendation.
Not bad. Worth a try.
Read more
One person found this helpful
Helpful
Comment Report abuse

DED
4.0 out of 5 stars Entertaining Sci-Fi Adventure
Reviewed in the United States on March 20, 2016
I received a free copy of the book in exchange for an honest review.

This is the first book in a new series, but it takes place in the same universe as "Jezebel's Ladder", just 400 years later. While several books followed "Jezebel's Ladder", they are not required reading for this book. However, if you enjoy this book and want to know how Earth got to this point, then you should consider picking them up.

The book starts off with a fair amount of action. Rhine does a good job introducing us to Max and the universe he lives in without drowning us in background. Once Max is forced to accept the job from the alien mobster, the action is replaced by intrigue as Max rides a starship to find the fugitive. While there's FTL travel, it's slow enough (weeks instead of years) that Max has time to work on a way to manipulate the situation to accomplish his goals. The action returns in time for an early climax. The last 20% of the story, while still interesting, serves more to set up the next book in the series.

The blurb made it sound to me like Max was an old world bushman living in the Star Wars universe, but that's definitely not the case. Max may have grown up among the !Kung, but he has a modern education and has been culturally assimilated. He was given a new name to fit in. "Max Culp" is actually derived from mea maxima culpa—through my most grievous fault. The story is told from Max's POV, and Rhine is adept at revealing his character and why that name suits him. His past haunts him and affects how he conducts himself. When it comes to planning operations or assessing a rapidly changing situation, Max is sharp as a tack. But when it comes to relationships with women, not being around humans for several years has left him weak. He grovels at the feet of the first one and is hopelessly naive with the second. He's a bit too much the perfect gentleman with the third, but there's still hope he'll get it right.

Rhine makes good use of dialogue to advance the story, and the pacing is solid. His characters have depth, even the aliens. While Rhine tries to keep the story accessible to most adult readers, he's smart about how he does it (i.e. alien foul language gets mistranslated by translator tech). And while there's plenty of the usual sci-fi stuff like spaceships and cool tech, it never steals the show. With Rhine, the plot and the characters keep us engaged.

I'd read "Jezebel's Ladder" in 2012, but nothing since then. Rhine has kept busy, writing over a dozen books. While he's been prolific, I can see that his writing has matured as well. It's nice to see an indie writer work to improve his craft instead of just churning out product.
Read more
One person found this helpful
Helpful
Comment Report abuse
See all reviews