Check fit by camera:
Find the right part
Make sure this fits your model
Can't find your model number?

We're not sure this item fits your
Why not?
Check another model
Our finder cannot confirm if this item fits your model. Try checking the product description for more information.
Thanks for your Feedback
Please provide your feedback 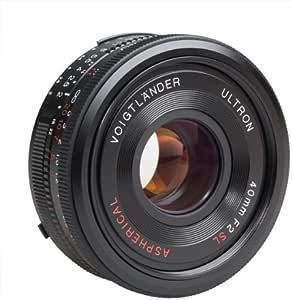 Brand: Voigtlander
4.3 out of 5 stars 24 ratings
| 6 answered questions
Currently unavailable.
We don't know when or if this item will be back in stock.

4.3 out of 5 stars
4.3 out of 5
24 global ratings
How are ratings calculated?
To calculate the overall star rating and percentage breakdown by star, we don’t use a simple average. Instead, our system considers things like how recent a review is and if the reviewer bought the item on Amazon. It also analyzes reviews to verify trustworthiness.

C. Morrow
5.0 out of 5 stars Compact, Sharp, Great combo for D750!
Reviewed in the United States on July 18, 2017
Verified Purchase
Very happy with this lens. I am a relative newb to full-time manual focus, but the focus ring is very smooth and this setup seems to work very well on my D750. When I nail focus I have been VERY impressed with the sharpness (the "when" in this statement is more determined by the user than the lens). I love how compact it is, have been searching for something to make the D750 just a tad more portable, and I think this may supplant my Fuji X100. My only complaint, which is incredibly minor, is that I wish it had a bayonet style hood, rather than the weird screw-on one, but that's not even worth subtracting a star. Such a great lens!
Read more
2 people found this helpful
Helpful
Comment Report abuse

bighatnohorse
3.0 out of 5 stars Great images at f8
Reviewed in the United States on June 25, 2018
Verified Purchase
To achieve maximum performance the lens has to be stopped down to f8 - or it loses "apparent" contrast. This is due to a loss of sharpness and possibly color registration. The exposure is not consistent between f8 and f2.5
Images made af f8 are sharp and detailed with good color saturation. Vignetting is very apparent at f2.5 and the images appear soft.
Build quality seems strong. There's no autofocus.
Considering that there is no autofocus and the lack of sharpness below f8 and cost, I rate it at "average" and give it three stars.

For the money, it's okay if one does not mind shooting everything at f8 - it can produce great images at that aperture. But one still has to manually focus it.

zbob
5.0 out of 5 stars Voigtlander Ultron 40mm f/2 SL-II
Reviewed in the United States on April 22, 2011
Verified Purchase
This little gem represents a bridge connecting today's technology and good-old craftsmanship. Every action is silky smooth, with refreshing feel of quality and precision - it feels like fine swiss-made mechanical Watch (and it is not much bigger!). Using this lens reminded me how much fun could be using a well-engineered, excellently executed and super-sharp manual focus lens. Also, built-in CPU provides communication with your latest DSLR on-board computer, giving you access to all-auto exposure and providing you with focus confirmation in the viewfinder. This is a very sharp lens, even wide-open at f2 - maybe sharper than Nikon's own sharp prime lenses ( I compared Ultron to my 50mm F1.4 Nikkor - Ultron was sharper, especially from f2 to f8). I feel that resolution of 16.2 MP sensor in my new D7000 (DX format)is not enough to utilize optical resolution of this lens to full extend. Maybe it would shine even brighter on your FX or film camera. I love it!

PS
Recently I needed sharp high-res photo of a small object on FX camera. To increase depth of field the lens had to be closed to it's maximum F-number. Results from Nikon prime lenses closed-down were too soft. Ultron saved the Day - pics came out razor sharp even with lens at F22. This lens is magic!
Read more
19 people found this helpful
Helpful
Comment Report abuse

Albert G. Smith Jr.
5.0 out of 5 stars punches above its weight
Reviewed in the United States on December 13, 2016
Verified Purchase
I had sworn off of third party lenses for a couple of decades after being repeatedly disappointed by lenses that seemed to test well in magazines but did not live up to the hype on my cameras. I have only mounted Nikkor lenses on my Nikons (both film and digital) since the 1990s, but today many people are embracing certain lenses from specific companies, so last month I took an expensive leap of faith with the Voightlander 58mm f/1.4, (the new one which looks like an AIS lens), and boy was I pleasantly surprised at how good it is. So this led me to the 40mm Ultron, hoping lightning could strike twice. I am happy to say this lens is terrific in terms of optics and construction.

I wanted a small lens to minimize the profile of my full-frame camera to allow me to always have a camera with me. I had always used a 35mm lens on my Nikons and Leicas as my normal lenses, and the 50mm was also used, but I would not carry both as they are too close to justify changing lenses on the fly. The 40mm is like a perfect compromise, not too long, not too short. It was very quick for me to find myself in the right place to frame with this lens. The focusing action is more abrupt than it is on the 58mm, But this is good for a moderate wide angle with a slower aperture. I find that the manual focusing with the 40mm is very fast and accurate in most situations. Additionally, the depth of field scale allows for good zones of focus at moderate apertures for super fast grab shots in the street shooter’s style.

Optically, this lens can be used at full aperture without fear. Stopping down to f/4 and out to f/11 gives stunning results. I shot the classic “brick wall” test in oblique light and the textures revealed were unbelievable. I use “vivid” on my Nikon D700 for Jpegs, but with the 40mm Ultron, I think the “standard” picture control is more realistic because the sharpness and contrast from the lens is already high, and “vivid” almost kicks it up into a fake look. The out of focus rendering is fine, but at this focal length and at moderate apertures, bokeh isn’t its primary strength. There are nine aperture blades, so out of focus high lights do stay nice and round.

There is one weakness, and I think that it is due to the desire to maintain a tiny profile, and that is the almost useless lens hood, which also requires an ineffective lens cap. The hood does nothing to prevent stray light from anything shallower than 90 degrees to the lens. The small opening requires a protruding cap that if bumped on the edge in one of the two spring loaded squeeze points will result in the cap falling off. I replaced the hood cap with the HN-3 Nikon hood (which I already had) that was used on the 35mm lenses with the 52mm filter rings. This offers much more protection plus allows for a Nikon cap to be installed inside the hood with no fear of it being bumped and lost.

andy s
5.0 out of 5 stars Overall impressed!
Reviewed in the United States on November 29, 2016
Verified Purchase
I'm actually pretty impressed. I'm sad Nikon doesn't have any pancake lenses but this actually fits the bill. I'm not super fast with manual focus, so haven't used it for any paid gigs, but used it on some travel photography and I've gotta say it's super sharp. Very impressive. The macro side of it? Eh, I'm not a huge fan of little screw on macro adapters. The cap, in general, is also small and might not stay on in your case (depending on how you carry things). But overall I'm really impressed and love having something small to put on my D750.
Read more
One person found this helpful
Helpful
Comment Report abuse
See all reviews
Pages with related products. See and discover other items: Slr Film Cameras, Digital Cameras, Film Cameras, Matrix Filters