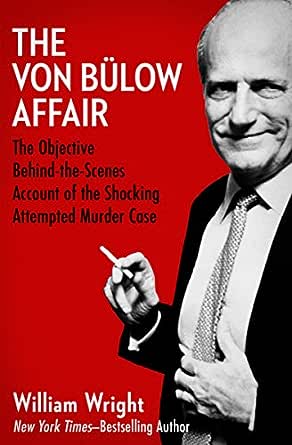 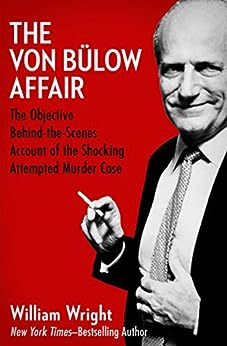 “Wright has written a fascinating social and legal history. . . . Clarifies many of the issues of the case.” —The Washington Post

“All the ingredients of the best Agatha Christie . . . A fascinating portrait of life among the very, very rich . . . Did Von Bülow have murder in his heart or was he framed? I sat up two nights reading to get the answer.” —Russell Baker

“[Wright] gives back to Sunny Von Bülow a measure of the dignity that was stolen from her.” —The New York Times

“For aficionados of tales of murder, this is one of the best, involving as it does, wealth, beauty, and high society. It proves once again that in the hands of an able craftsman, life is more compelling than art.” —Joseph P. Lash

“If you are partial to true crime tales, this is an unusually well-researched and well-written one.” —Cosmopolitan
--This text refers to an alternate kindle_edition edition.

William Wright, the author of ten nonfiction books on diverse subjects, was born in Philadelphia in 1930. After earning a BA at Yale University, he served in the US Army as a translator and interpreter of Mandarin Chinese. Later he became an editor at Holiday and the editor of Chicago magazine. In addition to The Von Bülow Affair, Wright is the author of many books, among them Lillian Hellman: The Image, the Woman; Pavarotti: My World; and Born That Way: Genes, Behavior, Personality.
--This text refers to an alternate kindle_edition edition.

Rasheed
4.0 out of 5 stars Rich Does Not Equal Interesting
Reviewed in the United States on October 7, 2016
Verified Purchase
I like this book in as much as I appreciate the research done by the author and putting the story into print. But, I must say that the only reason this entire affair (Sunny Von Bulow's comatose state and Claus Von Bulow being a suspect) is a story is that they were rich. Take their money out of the equation and this book doesn't even happen nor the rabid coverage. Of course, some will read this and say, "duh!"

With every true crime book there is some exposition and background information about the main players. I found nothing compelling about Sunny Von Bulow and Claus Von Bulow. They were incredibly wealthy, attended elitist parties, traveled the world and had many servants. If that makes a person interesting then every wealthy person should have a book and/or a reality show. Let's retell this story with the Von Bulows being middle class. Now they attend parties not attended by princes and heirs but principals and hair dressers. Now they travel, not all over the world but maybe to their timeshare. Now their servants are the eldest of their children forced to help around the house. My point being, yes they are doing things ordinary people can't afford to but there's still no intrigue.

Even their personalities weren't noteworthy. Claus was a European socialite that loved rubbing shoulders with the elite. Sunny was an American heiress that was more of a recluse but otherwise ordinary. They did nothing that was unexpected of them.

The story heats up when Claus begins to have an affair. From that point on it is a series of events that lead up to Claus being tried for attempted murder. Much of the information that is divulged throughout the book gets repeated during the trial phase of the book which makes the trial phase redundant. And speaking of the trial phase, of the dozens of true crime books I've read, this is the first to mention the verdict at the very beginning. Granted it was a real event that many knew the outcome of but I didn't! Not only did I not know the verdict but it's just poor writing to tell the ending at the beginning.

Still, with the knowledge of the verdict I was interested to know how that verdict was garnered and the author, William Wright, probably understood that as well. If the rating scale was 10 I would have given it a 7 which would correlate to a 3.5. Since I can't give it a 3.5 I've rounded it up to a 4 out of 5.
Read more
16 people found this helpful
Helpful
Comment Report abuse

Pushing 70
4.0 out of 5 stars A bit wordy but interesting none-the-less
Reviewed in the United States on January 12, 2019
Verified Purchase
I followed this story from the news accounts when charges were first brought against Von Bülow. This book went into detail about his life before his marriage to Sunny and during their years together; he is truly an unlikeable individual. Such a travesty that this lady’s life was taken from her and no one was ever held accountable.
Read more
One person found this helpful
Helpful
Comment Report abuse

Amazon Customer
5.0 out of 5 stars High Society Crime Told Well
Reviewed in the United States on October 9, 2014
Verified Purchase
My old friend Bill Wright is an excellent biographer and he has captured the kinky tone of the attempted murder of a society lady by a well-bred cad in exquisite detail. Fascinating.
Read more
8 people found this helpful
Helpful
Comment Report abuse

Ramona
4.0 out of 5 stars Von Bulow
Reviewed in the United States on December 25, 2017
Verified Purchase
A great true murder read! I was intrigued with all the circumstantial evidence and the eventual verdict. Very well written especially the courtroom episodes. The main characters in the book lived lives way beyond the ordinary existence of everyday folks and give us a glimpse into their frivolous world.
Read more
One person found this helpful
Helpful
Comment Report abuse

Vicki A. Risser
5.0 out of 5 stars Good seller and great book
Reviewed in the United States on April 17, 2020
Verified Purchase
The seller is excellent and the book was packaged beautifully. A fascinating account of Sunny Von Bulow’s mysterious coma. I have read this book many times in years past; so it is always great to buy it again and reread it.
Read more
Helpful
Comment Report abuse

B. Spencer
5.0 out of 5 stars Justice (or not)?
Reviewed in the United States on February 13, 2010
Verified Purchase
This book provided what I was looking for; information about the lives of the Von Bulows and the circumstances surrounding her death.
The trial was also presented which was very interesting as I had seen the movie, Reversal of Fortune and wanted to see for myself if I agreed with Alan Dershowitz' defense in Von Bulow's appeal.The book provides additional information that was not included in the movie and that was what I was looking for when I read the book.
I found it to be interesting reading; though the book is rather thick, it doesn't take long to finish reading.
Read more
14 people found this helpful
Helpful
Comment Report abuse

Raymond W. Ellis
4.0 out of 5 stars My review of The Von Ville Affair
Reviewed in the United States on August 2, 2019
Verified Purchase
I thought that this was a very good book. The author was detailed in describing the trial. I especially liked the details of the main characters personal history. The book kind of ended suddenly. I thought a little more information about what happened after the verdict would have made it better. However, overall I enjoyed it.
Read more
Helpful
Comment Report abuse
See all reviews

Valerie Davies
4.0 out of 5 stars A different world
Reviewed in the United Kingdom on November 9, 2017
Verified Purchase
Excellent look into a life few people can only dream of. Money however does not always buy happiness and I wonder how the family gave coped since.
Read more
Report abuse

wolfie
4.0 out of 5 stars present
Reviewed in the United Kingdom on March 17, 2013
Verified Purchase
I bought this for a friend - she liked it and it was in good condition, so one happy lady
Read more
Report abuse

Colin Stuart Mills
5.0 out of 5 stars The von bulow affair
Reviewed in the United Kingdom on August 18, 2014
Verified Purchase
Completely gripping. I first read this book when it was first published. Years later I am so pleased I read it again.
Read more
Report abuse
See all reviews