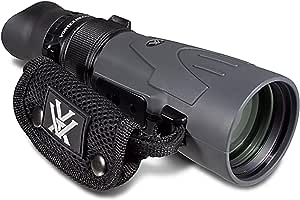 Visit the Vortex Store
4.4 out of 5 stars 13 ratings
| 6 answered questions

Hashmarked ranging reticle using MRAD based subtension lines for ranging, holdover, and windage corrections. The R/T reticle is based on an angular measurement called the milliradian (mrad for short) that allows you to calculate ranges when comparing the reticle to an object of a known dimension. The key to effective ranging with this reticle is knowing the measurements of common objects in your vicinity.

The Recon R/T features a winged eyecup that blocks stray light when fully extended. The heavy duty folding flared rubber eyecup on the Recon R/T is designed to accommodate both eyeglass wearers and non-eyeglass wearers. If you are viewing with eyeglasses, fold the eyecup down for the best views.

Use the main focus wheel on the eyepiece to obtain crisp, sharp images of objects at varying distances. Designed for quick single-handed operation, simply place the thumb and forefinger on the focus wheel and turn to move lens forward or backward until the image is as sharp as possible.

The reticle focus, located on the eyepiece next to the eyecup, adjusts the sharpness of the reticle. While looking at a blank wall or blue sky, turn the wheel until reticle is as sharp as possible. Once set for a particular user, that user will not need to adjust the reticle focus again.

Chris Smith
4.0 out of 5 stars Very nice, but overkill
Reviewed in the United States on December 20, 2015
Verified Purchase
I answered someone's question about whether it would go out past 500 meters, and this is what I said:
"Yes. The ranging silhouettes go out to 600 meters, but the hashmarks on the reticle are in MRAD, and they give you about 100 mils of total elevation from top to bottom, and a 100 mils of total windage from left to right; and 15X magnification is sufficient for well past 1,000 yards. Vortex glass is not the very best you can get, but it is pretty darn good. I own a couple of Vortex rifle scopes and I am very satisfied with them and have shot past 500 yards with them. The glass in this monocular is comparable to the rifle scopes. My only complaint about this monocular is its size and weight. It is fine as a range instrument in the role of a spotting scope (it comes with a miniature flexible tripod that fits in the same case), and it is fine in a backpack for an extended hunting trip on foot for long range hunting purposes. Where it fails is as an EDC optic for daily use, where the 8x36 Solo R/T is a better choice. I bought my son the Solo R/T for Christmas last year, and it is much lighter and smaller, and more convenient to carry daily in your EDC kit. It has the same reticle, but with "only" about 70 vertical and horizontal mils, and at 8X, it has more than adequate magnification for any uses most of us will run into......even out past 500 yards.....in a package that is significantly smaller and lighter (by comparison, 4X magnification on an ACOG reticle takes you out to 600 yards). Would I recommend the 15X monocular to someone else? Sure. I'm happy with mine. But the truth is that for most people, in most situations, it is a little bit of overkill."

I gave this 15X monocular 4 out 5 five stars for EDC use. It is worth 5 stars, but only in limited roles. The 8x32 Solo R/T is probably the better choice for most people who are looking for a monocular that will get regular usage. Most hunters/shooters, myself included, don't need and won't ever use the additional range this monocular provides, even at longer ranges, and the size/weight penalty over the smaller unit is significant.

I have no real regrets about having bought mine, and I do use it at the rifle range, but I will likely buy a Solo R/T for myself for EDC use.

RubyWine
4.0 out of 5 stars Meets most of my needs
Reviewed in the United States on September 11, 2019
Verified Purchase
We’re enjoying this lightweight higher magnification option. My face is petit so larger magnification binoculars are too wide for my face.
The only thing I could do without is the reticle “hunter view”. Not really needed or wanted for wildlife viewing.
Read more
4 people found this helpful
Helpful
Comment Report abuse

anonymous
5.0 out of 5 stars Super Spotting Scope
Reviewed in the United States on January 31, 2017
Verified Purchase
Nice sharp, minimal distortion (at least to my contact lens infused eyes). Focus adjuster isn't where my fingers tend to expect it, but that's a nit. We primarily have ours tripod mounted for ship watching.
Read more
3 people found this helpful
Helpful
Comment Report abuse

Ac
5.0 out of 5 stars Five Stars
Reviewed in the United States on October 26, 2017
Verified Purchase
Exactly as advertised would recommend to a friend
Read more
2 people found this helpful
Helpful
Comment Report abuse

CaptainCheckSix
5.0 out of 5 stars Talk about shedding weight!
Reviewed in the United States on May 10, 2013
Verified Purchase
I don't know why any hunter trying to cut pack weight would carry bino's when this product is available. It's fantastic. The optics are outstanding. The built in reticle range finder is brilliantly conceived. Works great.
Read more
17 people found this helpful
Helpful
Comment Report abuse
See all reviews

Page 1 of 1 Start overPage 1 of 1
This shopping feature will continue to load items when the Enter key is pressed. In order to navigate out of this carousel please use your heading shortcut key to navigate to the next or previous heading.
Back
Next
Pages with related products. See and discover other items: Monoculars, block camera, stability block, Mono Blocks