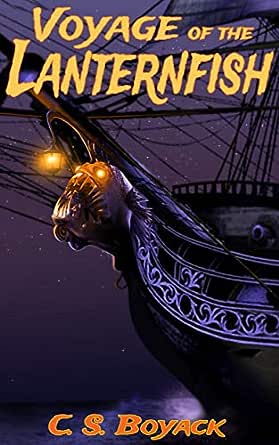 You've subscribed to The Lanternfish Series! We will preorder your items within 24 hours of when they become available. When new books are released, we'll charge your default payment method for the lowest price available during the pre-order period.
Update your device or payment method, cancel individual pre-orders or your subscription at
Your Memberships & Subscriptions
There was an error. We were unable to process your subscription due to an error. Please refresh and try again. 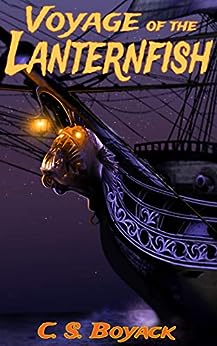 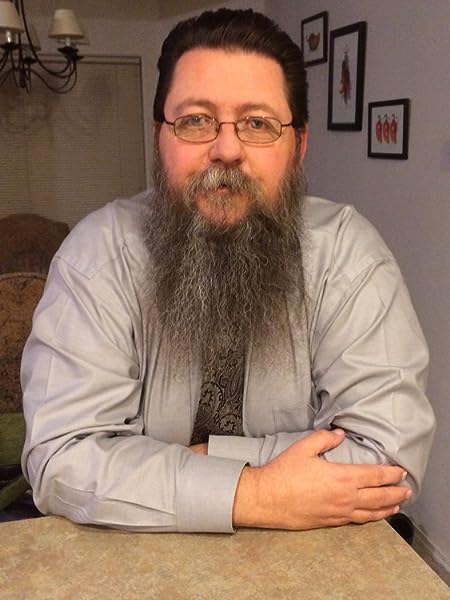 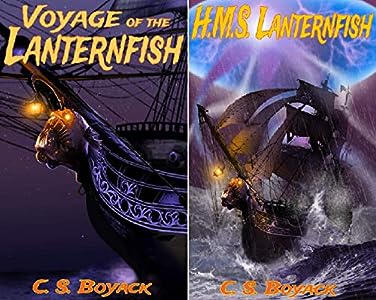 Robbie Cheadle
5.0 out of 5 stars A fabulous adventure on the high seas
Reviewed in the United States on March 2, 2019
Verified Purchase
I really enjoyed this book. It is a wonderful adventure of pirates on the high seas, along the lines of the famous Treasure Island, but filled with marvelous creatures and unusual beings and people, in the manner of The Hobbit, and incorporating a splash of the science fiction innovation found in the Harry Potter series of books (which I loved). I enjoyed Voyage of the Laternfish more than either Treasure Island or The Hobbit because it also contained some humour and there is nothing like a bit of well written humour for great reading pleasure.

My favourite character was ... the root monsters. They were the most fascinating creatures ever reduced to the written word by an amazing imagination. Of them all, Trubba (Trouble) was my favourite and I enjoyed reading about their antics and the theatrical performances they put on to entertain the crew.

When Dan and James are kidnapped, along with Dan's sister and James' fiance, Bonnie, this tale of adventure begins. The kidnapper incarcerates Bonnie in his castle to ensure that Dan and James fulfill their promises to help him invoke a war with a rival country. The kidnapper, however, vastly underestimates the determination and abilities of the pair and they escape, hell bent on starting the war on their own terms in order to rescue Bonnie.

Dan and James head towards a sea port, collecting other desperate and outcast people along the way. Their kindness towards others turns out to be a great benefit to them when Mal, an elderly cannibal from a large island in the South Seas who has been forced into slavery, and Fala, a young woman with no home and no protectors, become part of their team. At the seaport, the group meets the captain of a band of pirates looking for adventure and they decide to all work together to become the outstanding pirate crew of a small ship. Before long, the pirates have acquired themselves a much larger and more impressive ship and are gadding about the oceans having lots of adventures.

I thought the ideas and themes in this book were very clever and that it was well written and entertaining fantasy read.
Read more
2 people found this helpful
Helpful
Comment Report abuse

writester
5.0 out of 5 stars Pirate Fantasy at its Finest
Reviewed in the United States on January 31, 2019
Verified Purchase
When I heard one of my favorite authors had taken on a pirate fantasy, I was excited. There’s something compelling about a scoundrel’s life on the high seas that captures my interest. Add C. S. Boyack’s quirky and clever take on characters and plot, and I was certain this would be a winner.

Boyack crafted some of my favorite characters to date — root monsters. They are fun and boisterous creatures that really help sell the type of story this is. It’s not a standard swashbuckler. It’s magical realism. There’s just a smidge of magic and make believe that help to create a fantasy world anyone would love to visit. From different nationalities to nautical cryptids, this world is vibrant and believable.

World-building aside, these are strong and unique characters. Boyack managed to give us a representative sampling of all walks of life while blending them seamlessly on the page. Everyone has a unique voice and motivation, and all of them are memorable.

The action is fast-paced. The plot is solid. The characters are unique. And it all comes together to create an epic adventure. I wish I could give it more than five stars. As it is, I’ll just have to hope for a sequel.
Read more
One person found this helpful
Helpful
Comment Report abuse

JanS
4.0 out of 5 stars Magic, Mayhem and Monsters
Reviewed in the United States on January 12, 2019
Verified Purchase
What I enjoyed most about this new book from C.S. Boyack is the fantastic job of world-building he accomplishes through creative writing. I had no difficulty visualizing the cities, the boats, the monsters, or the people that make up this story. The root monsters are a surprise and it’s fun to see them take on personalities and start to become somewhat human. The goal of James Cuttler is often different from that of his makeshift crew, but he manages to keep everyone happy with enough looting to satisfy any good pirate. His goal is to start a war between two countries and rescue his fiance. The adventures along the way, the battles, the exploration and discoveries kept me turning the pages. I'd be hard pressed to pick a favorite character. I love Mal for his devotion to James (aka Captain Bloodshot) and for his incredible ability to grow monster creatures in dirt, using his special magic. I love Serang for her fierce loyalty and amazing physical abilities. Plus, she has her own surprising brand of magic. The romance that blooms between Fala and James' best friend, Dan, is believable and adds a touch of sweetness to the story. But I think my favorite character is the half-goblin half-human woman, Halfrid, who ultimately gives James the magical tool he needs to accomplish his goal and rescue his fiance. The action and battles are intense. The ending is satisfying. Anyone who loves adventure on the high sea mixed with fantasy and magic will enjoy this story as much as I did.
Read more
Helpful
Comment Report abuse
See all reviews

Harmony Kent
5.0 out of 5 stars A Magical Read
Reviewed in the United Kingdom on July 23, 2019
Verified Purchase
I bought and read this book back in January and somehow managed to forget to review it until now, six months later, lol. So, here my review is, at last. It says a lot that even after all this time, I still remember this book and its characters clearly, which is one reason I mention my little episode of forgetfulness now.

I've read other books by this author and love his easy style, sense of humour, and vivid imagination. He has a way with words. And Voyage of the Lanternfish certainly didn't disappoint. We have kidnapping, piracy on the high seas, swashbuckling adventure and mayhem, and unforgettable characters and creatures. By far my favourite from this book are the root monsters with their incredibly expressive 'I,I,I,I's'. (Trust me, once you read it, you'll know what I mean.)

If you're a fan of magical realism and/or fantasy fiction, you're sure to love this book. According to my GoodReads record, I read this in 24 hours. It would have been in one sitting if not for life intruding. This book gives you excellent world building and characterisation, along with fast-paced action and a rip-roaring plot line. The story will stay with me for a long time, and this is one of those books I'll find myself re-reading (and not just because of my poor memory, lol). I cannot recommend Voyage of the Lanternfish highly enough. It gets a solid five stars from me.

NOTE ON RATINGS: I consider a 3-star rating a positive review. Picky about which books I give 5 stars to, I reserve this highest rating for the stories I find stunning and which moved me.

5 STARS: IT WAS AMAZING! I COULD NOT PUT IT DOWN! — Highly Recommended.
4 STARS: I WOULD PULL AN ALL-NIGHTER — Go read this book.
3 STARS: IT WAS GOOD! — An okay read. Didn’t love it. Didn’t hate it.
2 STARS: I MAY HAVE LIKED A FEW THINGS —Lacking in some areas: writing, characterisation, and/or problematic plot lines.
1 STAR: NOT MY CUP OF TEA —Lots of issues with this book.
Read more
Report abuse

Amazon Customer
4.0 out of 5 stars A fun rollicking ride filled with pirates, monsters, and adventure!
Reviewed in Australia on September 3, 2020
Verified Purchase
I'm a big fan of C.S. Boyack. He displays creativity, a unique imagination, and pumps a lot of heart into his books. You can usually find an assortment of interesting characters, and 'Voyage of the Lanternfish' has these guys in abundance. Funnily enough, it wasn't the main character (James), or even the chief sidekick (Dan) who hooked me in, it was the vast array of supporting characters. Wise Mal (easily a favourite), feisty Serang, bumbling Biscuit Bill, irrepressible Boss, even Mule won me over despite only being introduced near the end of the adventure. There's someone for everyone to cheer on aboard the Lanternfish.

A nicely unfolding story set in a make-believe world that you could dead-set believe was real, offers action, adventure, and even some supernatural shenanigans (root monsters, ya ya!). Also, it wouldn't be a Boyack book without some wry humour tucked among the cannon battles and swordfights:

'Voyage' is certainly a more grandiose adventure than other titles I've read by Boyack, say for example, 'The Hat', and juggles a huge cast of characters, and multiple overlapping goals. Despite such size and scope, each character gets his or her turn in the limelight, which is great, though I'd like to see more emotional interplay between the characters. This only being book 1 in a series, however, I expect that will follow as these miscreants enjoy more adventures together.

The detail about pirate ships and weapons of the time period is extremely thorough, and it's clear Boyack either did a ton of research or else was a pirate in another life! It made the story all the more believable.

If you're looking for a fun rollicking ride filled with pirates, monsters, and adventure, hop aboard, and take a 'Voyage of the Lanternfish'.
Read more
Report abuse
See all reviews