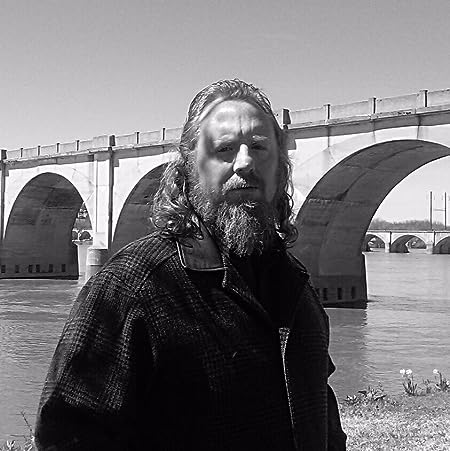 Writer of Stocks, Investing, and Trading. 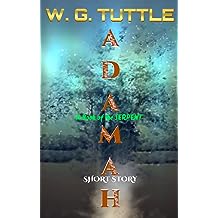 This is a firsthand account of Adam’s beginnings, as Adam told to the Serpent in the form of Lucifer, east of the Garden of Eden after Adam and Eve’s banishment. Scribed by Lucifer in Mesopotamia, thousands of years after Adam’s death.

The Serpent witnessed them all.
Read more 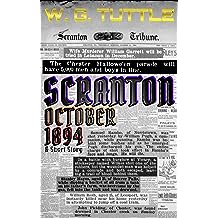 Irish men, women, and children, who, in their skin sacks, brought their customs, traditions, and beliefs across the Atlantic to America.

Celtic festival of Samhain. Halloween. When the veil between the living and dead narrows.

And revengeful ghosts crossover into the world of the living—to take those who have wronged them back with them where the dead dwell.
Read more 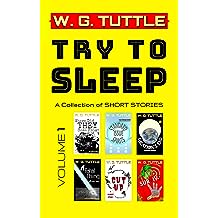 Try To Sleep May 9, 2020
by W. G. TUTTLE
$8.99
Don’t say you haven’t been warned. I dare you to read this compilation of short stories that will assault your imagination.

In Where Did THEY Come From?, the horror stories Sorrel writes are presumably from his mind’s eye. But are they imagined—or real?

In Standard Issue Spirits, everyone has a spirit, but is each one unique? Raimonds decides he is going to find the answer. How he goes about it will shock you.

In Vacation’s End, the Keifers are a typical American family. Why do they then suddenly cut all ties and leave for a vacation?

In A Fatal Thing, otherworldly beings invade Earth. Dr. Gombya takes matters into his own hands to save the world.

In CUT-UP, it is Halloween. Rennis’ mask—is his sliced-up face. That’s not all he cuts up. Has he gone mad, or is there an insidious evil lurking to seduce him?

In SURVIVE, an invisible, odorless, silent predator preys on living tissue, growing more powerful by the second, replicating and spreading on every continent of the globe. Under mandatory quarantine conditions, Ray ventures into the city for something his wife needs—twice. Will he SURVIVE? Will the world SURVIVE?

If you accept this dare, know that when you turn out the light and lay your head on the pillow for the night, these stories will haunt you.

So, go ahead . . . TRY TO SLEEP.
Read more
Other Formats: Hardcover , Paperback 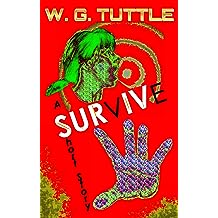 Dejected from not finding what he searched for, Ray stood on a sidewalk in New York City—alone. At least, he thought he was alone. Until he saw a woman across the street, staring at him.

Then, crazed, she ran toward him.

Ray knew she wanted to harm him. And he knew because he lived in a quarantined city, as was the rest of the world. The city that never sleeps now slept-in because no one left their homes. If they did, they risked their lives.

As Ray was, running for his life.

What was so important to bring Ray out into the barren city, when he should be shut-in?

Will he venture out again?

Will the world SURVIVE?

Or will the cause of this pandemic, which preys on living things, replicates, and spreads, between all living things, across oceans, invisible to the naked eye, odorless, and silent, out-SURVIVE humanity?
Read more 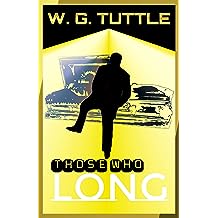 Those Who Long Apr 29, 2020
by W. G. TUTTLE
$8.99
Thad E. Hadet spent a lot of time at the Will B. Still Funeral Home in town. He didn’t work there. And those who did were of no relation to him, not even a friend outside of being friendly. Nor was he terminally ill.

So why did Thad show up at the funeral home every single day?

He was making funeral arrangements—his own.

It wasn’t all of the time, but on several occasions, Thad had shown up wearing the suit he was to be buried in. Yes, at age forty-two, he had everything picked out. Every detail of the funeral needed to be perfect. For Thad, there was no better way of passing the time by planning for the big day—while he waited.

But dry runs of lying in the back of the hearse, on the embalming table, and spending the night in his latest choice of casket went beyond planning.

This was a longing.

Was Thad taking this too far?

The dead thought so.
Read more
Other Formats: Hardcover , Paperback 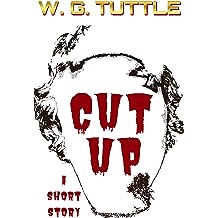 CUT-UP Mar 2, 2020
by W. G. TUTTLE
$2.99
With bloody hands, Rennis leaned on the cracked porcelain sink in the bathroom, staring at the black form in the mirror. His wife’s dead body laid on the floor of the narrow kitchenette. Where his kids had gotten to, he couldn’t remember.

Bizarre visions and callings showed Rennis what he could become and a life without care, need, or fear. For what was there to fear when Rennis could be fear itself. A different man entirely. One with power and who demanded respect for a change.

With a lipless, flesh-ribboned face and exposed grinning teeth, Rennis ventured out into the city, leaving his family and past life behind.

Had he gone mad?

Or was there an insidious evil seducing him?
Read more 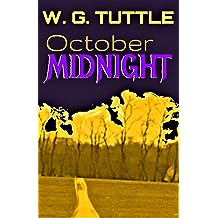 Where Abbie Syfert is being driven to watch the Thummel’s two young children.

Where Kayne and Kaleigh are stored in cryogenic tanks, placed there by their father because he thought they had died.

Where one night a year, an unsuspecting child is lured to be sacrificed to appease the dark power the Thummels had called upon decades ago.

Where the children’s spirits are released from their captive bodies and possess their parents.

Where, through their parents, the children do the killing.

Where no one escapes! 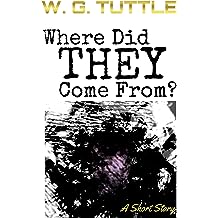 Where Did They Come From? Apr 4, 2019
by W. G. TUTTLE
$2.99
France is known for its food, architecture, and as a place for Romance. Bringing balance to this country was one of their own, Sorrel, a Frenchman who writes horror novels.

Capturing what he saw playing out in his mind’s eye into recorded stories came naturally to him. Scared readers could testify how his written words provoked a lingering belief that threats remained nearby although they finished reading his book weeks ago. As powerfully addictive as anything this world has to offer, these residual feelings kept readers coming back for more.

Pressure to outdo his last novel, Sorrel, too, had become addicted to his own work. Negative experiences in his life had darkened the lens of his mind’s eye—blackened as if coated by hell’s infernal ashes. Perhaps, this made it harder for him to see the stories coming through, but whatever the reason, materializing those images in his imagination and bringing them to life seemed a reasonable thing to do.

Just how far would he go? Having scenes acted out in a performance while he wrote? Carried out in real life with equally real consequences? No writer would have the audacity to stage a scene to capture it on the page. Surely, Sorrel wouldn’t. 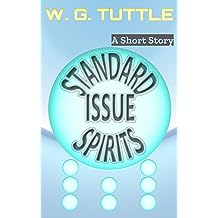 Standard Issue Spirits Mar 26, 2019
by W. G. TUTTLE
$2.99
All is quiet around a secluded property in Skatre, Latvia where its reclusive owner, Raimonds, enjoys the view of the Baltic Sea in his leisure. Once a month, he ventures off the property to visit the nearby ports, ten in all: three hugging the coasts of the Baltic Sea and seven spread out along the southern half of the Gulf of Riga. For over a decade, he has never returned alone.

As a scientist, Raimonds asks the hard questions and isn’t afraid to try to find the answers. One in particular that has plagued him for a long time is whether the human soul, or spirit, is unique in each person? To answer this question, Raimonds must become the first human being to ever see the soul or spirit at work within a living person and then make comparisons.

His findings will shock you to the point of questioning your own soul.
Read more 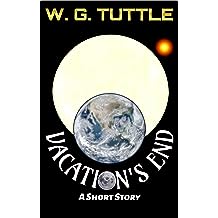 Monday, Ramsey walked away from a good-paying job he liked and contacted his broker to sell all of their investments.

Blaire is not herself. She cries often. Little things set her off that normally would not.

Their kids, Alanie and Will, are prohibited from watching TV or listening to the radio.

What did they not want their children to see or hear?

Why the peculiar behavior?

Why drop everything to go on vacation?
Read more 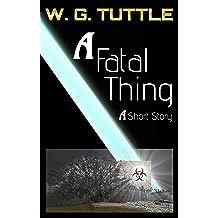 A Fatal Thing Feb 25, 2019
by W. G. TUTTLE
$1.99
Doctor Park Gombya, a respected Molecular Virologist, had spent two weeks in Liberia, Africa, working with other scientists on another Ebola breakout in that area, and was now returning home. As his plane descended for landing at Entebbe International Airport, he looked out his passenger window. A brilliant light hovered over Uganda’s Capital City, Kampala, twenty-seven miles north of the airport. It wasn’t until he was on the ground that Doctor Gombya could make out what it was.

Earth, its creatures, and its inhabitants already produce lethal killers. No one understood that truth better than Doctor Gombya. The last thing the world needed was something else to contend with. Now, a more immediate danger had come to Earth, threatening everyone. The question of whether humans were alone in the universe wasn’t a question anymore.

An idea of how humanity could compete came to Doctor Gombya as if he had been called upon by some higher power. Usually, voluntary surrender comes out of saving one’s own life, while resulting in losing the war. However, in this case, the calling demanded it and surrendering might result in humans winning the war against their invaders.
Read more 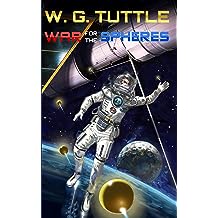 War For The Spheres Jan 22, 2019
by W. G. TUTTLE
( 2 )
$8.99
American Astronaut, Hayden Bakley, is an experienced space explorer. As many times as he had been into space, even he did not know a quiet, yet, potentially life-altering war for the spheres is taking place all over the world.

Daily our lives reach the spheres without our feet ever leaving Earth. Our dependence on satellites has alarmingly increased.

What if every orbiter encircling the globe, including space stations, was suddenly taken over? Complete command and control by one country—one group—one individual?

The Outer Space Treaty provides a framework for preventing such seizures. But what if those principles were now thought of as being outdated? That the spheres around the Earth were no different from the land, there to be conquered and controlled.

Hayden is drafted into the war for the spheres through no doing of his own, other than being in the wrong place at the wrong time. Now, it is up to him and an under-the-radar NASA group to stop such a monopoly of control from being achieved.

For whoever controls the spheres, controls Earth below and space beyond.
Read more
Other Formats: Hardcover , Paperback