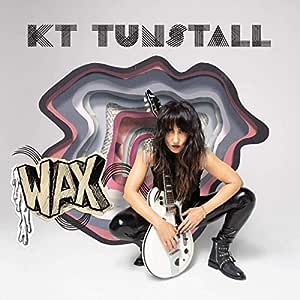 Since scoring a worldwide smash with her debut album ‘Eye To The Telescope’ in 2004, which went on to sell over 5 million copies, KT Tunstall has remained at the forefront of UK singer-songwriter talent. Over the next decade, three further critically acclaimed albums followed; ‘Drastic Fantastic’, ‘Tiger Suit’ and ‘Invisible Empire//Crescent Moon’ in 2007, 2010 and 2013 respectively, keeping the platinum sales rolling and cementing the Scottish singer-songwriter’s reputation as a major recording talent, as well as a mesmerising live artist. Tunstall has toured the world many times over. She landed a Grammy nomination for Best Female Pop Vocal Performance and lent her tunes to a host of movies and TV shows ('Suddenly I See', used in the iconic opening scene of Meryl Streep flick 'The Devil Wears Prada'). 2012 and the years that followed saw a seismic shift in outlook - the loss of her father, a divorce, and a relocation to Venice Beach, California. After a period of healing, soul-searching, and a change of scenery, 2016 hailed the arrival of the first of a trilogy of albums, the critically acclaimed UK top 10 album - 'KIN'. The trilogy evokes, separately and in sequence, spirit, body and mind. With 'KIN' being her phoenix-from-the-ashes 'spirit' album, 2018 will mark the second offering of that trilogy - her 6th studio album, her ‘body’ album - full details of which are to be revealed later this summer. The last few years have seen something of a creative rebirth for Tunstall. Upon relocating to the west coast of the USA, she was accepted as one of six annual fellows for the Sundance Film Institute’s Composers Lab (hosted by George Lucas’s Skywalker Ranch in Northern California) and has since scored music for short and feature films. As well as putting the finishing touches to her forthcoming album, 2018 has already seen KT being awarded the Inspirational Artist gong at Music Week's Women In Music Awards as well as having been invited to take on the role as the first ever female Grand Marshal (following the likes of Sir Sean Connery) to lead April’s annual New York Tartan Week Parade along Sixth Avenue. She will spend the summer touring with The Pretenders, Simple Minds, and Barenaked Ladies on the lead up to the much- anticipated release of her 6th studio album this Autumn.

Go Unlimited
Start your 30-day free trial
Stream WAX by KT Tunstall and tens of millions of other songs on all your devices with Amazon Music Unlimited. Exclusive discount for Prime members.
Sold by Amazon.com Services LLC. Additional taxes may apply. By placing your order, you agree to our Terms of Use.

4.8 out of 5 stars
4.8 out of 5
35 customer ratings
How does Amazon calculate star ratings?
Amazon calculates a product’s star ratings based on a machine learned model instead of a raw data average. The model takes into account factors including the age of a rating, whether the ratings are from verified purchasers, and factors that establish reviewer trustworthiness.
Top Reviews

Scooby
5.0 out of 5 stars Album of the Year! KT Tunstall is just getting better with age!
Reviewed in the United States on December 1, 2018
Format: Audio CDVerified Purchase
This is the first album by KT Tunstall I have ever purchased or listened to for that matter. Yeah, I had heard some of her hits from years ago like, Black Horse and Suddenly I See, but she was not really in the genre that I mostly listen to which is rock n' roll. All of that changed when she was featured in, Guitar Player Magazine. I saw the picture of her from this album cover and the story was titled, Electric Warrior, because she is amped up on electric guitar a lot of this album. So I thought I've got to purchase this and give it a listen. I was thoroughly blown away. There is not a bad song on this album. How often can you say that?!? I have now purchased, Drastic Fantastic, which is also an awesome album. KT is just getting better with age.
Read more
4 people found this helpful
Helpful
Comment Report abuse

Gilman Young
5.0 out of 5 stars 4.9 out of 5 stars. 2nd in her latest trilogy. Recommended, even for new fans.
Reviewed in the United States on December 24, 2018
Format: Audio CDVerified Purchase
"Wax" shows the remarkable progression of KT's writing & recording skills; although, I'm mostly impressed by the first 1/2 of the CD. It's theme is a focus on our bodies and the complex relationship with physicality but the instrumentation strongly supports the lyrics as well. "The River" stands out as her potential single. Although I've been a fan since her earliest days, this is only the 2nd album/ CD I've purchased and I wasn't disappointed. Stripped down to a quartet for her supporting tour, these studio versions offer a clear view of her growth; not only as a singer/ songwriter but as a recording artist. I'm far from a critical reviewer, but I hope this helps to provide enough insight to make a choice to purchase her latest album/ CD.
Read more
2 people found this helpful
Helpful
Comment Report abuse

Julie J
5.0 out of 5 stars KT Rocks...Again!
Reviewed in the United States on November 4, 2018
Format: Audio CDVerified Purchase
Every KT album (and concert) is different in style, line up, and message, and this one doesn't disappoint.
Read more
2 people found this helpful
Helpful
Comment Report abuse

Andrew Manley
5.0 out of 5 stars KT shows off her rock n roll side
Reviewed in the United States on November 18, 2018
Format: Audio CDVerified Purchase
This is the most "rock" KT has ever done. I think its really excellent, with Dark Side of Me being the real stand out. There are a couple songs toward the end that don't really hit, but she does some really interesting things on this album.
Read more
Helpful
Comment Report abuse

Mike
5.0 out of 5 stars KT Tunstall does it again
Reviewed in the United States on March 22, 2019
Format: Audio CDVerified Purchase
I am enjoying this album a lot. It is not as strong as KIN, but is definitely worth listening to.
Read more
Helpful
Comment Report abuse

David Nelson
3.0 out of 5 stars Waning Inspiration
Reviewed in the United States on November 13, 2019
Format: Audio CDVerified Purchase
Just not as inspired as past albums. KT needs a burst of inspiration. Not bad though.
Read more
Helpful
Comment Report abuse

Don
5.0 out of 5 stars Thoughtful songwriting
Reviewed in the United States on February 25, 2019
Format: Audio CDVerified Purchase
Such a great album. KT has knocked it out of the park with this one. She is such a powerful vocalist and profound songwriter.
Read more
Helpful
Comment Report abuse

D. Baker
5.0 out of 5 stars Underrated Artist
Reviewed in the United States on January 25, 2019
Format: Audio CDVerified Purchase
KT is a wonderfully gifted musician, I have enjoyed listening to her daily over the last few weeks.
Read more
Helpful
Comment Report abuse
See all reviews from the United States

Amazon Customer
4.0 out of 5 stars Best Tunstall since.. the last one!
Reviewed in Canada on October 10, 2018
Verified Purchase
So back when this dropped I wrote a pretty tepid review of it and didn't like it. That was stupid. Nowadays when I get my hands on a new album from KT I sit down by the fire with a big cup of tea, get on my monocle and harumph and hmm for a few weeks. Drastic Fantastic took ages to grow on me, Invisible Empire took ages to grow on me and Tiger Suit did too honestly. Hell, it took me a long time to realize that Telescope is one of the greatest things ever released.

If KIN is the fun happy upbeat poppy rock album with all the good hooks and obvious appeal, WAX is a darker and more introspective, deep album with some of her best lyrics probably since the high tier cuts from Drastic. It's pretty subjective but the lyrics are very emotional and I think they're generally relatable. Pretty much every cut on this album is great, and while its theming of "body" might not be immediately obvious, it comes through a lot more strongly than KIN's "soul" if you look just hard enough. The River is a belter, Human Being is a banger, The Healer is a banger, Dark Side of Me is a banger, In This Body is a banger. All really great stuff and it is refreshing to hear her back on the electric guitar in a serious grimy way. WAX is quite possibly better than KIN, it's probably better than Drastic or Invisible too. Better than Tiger Suit? Not sure about that, but it's a great record. And in a discography where the weakest entry(Drastic) is like a 7.5/10, that's saying a lot. Enclosed below is my silly original review.
--

>I listened to KT Tunstall's debut album in bits and pieces as my mum played it in the car when I was about eight years old. Since then I've listened to every single one of her albums, bar Tracks in July. If you're looking for the jagged, eccentric qualities of Tiger Suit or the understated stylings of Telescope, keep looking. But if you liked Drastic or KIN? By all means this is a very good effort. A few songs do enough to make themselves distinct from KIN, but not all of them. The Mountain, Dark Side of Me and Backlash & Vinegar are all memorable heavy hitters, after my first listen. In summary, WAX isn't exactly lighting my fires like a few previous albums have done, but it's good work and quite worth the $15 I paid to preorder it(plus a fiver shipping).

Now for the packaging, press and record itself; really, is this green cloudy LP limited? It's quite nice looking, I know coloured vinyl makes for marginally worse sounding LPs but I don't really care that much, and WAX looks wonderful on my turntable. It was also completely silent for surface noise and sounds pretty balanced. It is a pretty quiet press, volume wise, so prepare to turn it up and watch your VU meters bounce! The sleeve is a little thin but the LP arrived safely. This is one to display.