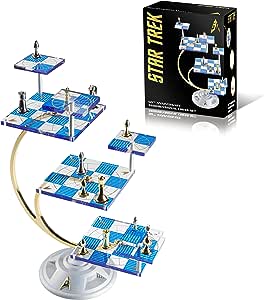 Visit the WE Games Store
3.9 out of 5 stars 31 ratings
| 6 answered questions
Available from these sellers.

WE Games has been making the world’s best traditional games since 1977. Our games are crafted with high quality sustainable materials with attention to fine details. Because they are timeless and beautiful, they are often kept out on a coffee table for all to enjoy. We love bringing people together with our classic board games, and we know the joy of the game will be passed down to the next generation along with the board game itself.

The Star Trek Tridimensional chess set is bold, distinctive, eminently logical, and has everything you’ll need to start your intergalactic chess playing expedition. The 32 game pieces are precision cast and coated in sterling silver or 24 karat gold, with three main playing boards, and four moveable “attack boards”. It also comes complete with a specially designed collectible booklet containing the history of the game and the rules of play. It is a stunning showpiece, moving the Star Trek saga into a bold new dimension. This chess set, from the Franklin Mint, is being released in honor of the 50th anniversary of the Star Trek TV series. The release is also timed in conjunction with the anticipated film Star Trek Beyond, the 13th film in the 50 year Star Trek franchise, being released summer of 2016. Since its inception in 1964, Star Trek has captured the hearts and minds of fans eager for a brighter future. The series’ views and ideas have moved beyond the screen and inspired the world outside of Science Fiction. Since the debut of “Court Martial” fans have been fascinated with the Tri-dimensional chess set featured in the episode. There have been many pop culture references to it, including episodes of “The Big Bang Theory” and “Doctor Who”.

Chess is one of the world’s most popular and beloved games with over 600 million players worldwide. The game is played in chess clubs, homes, and schools, online, via mail or email, and in tournaments. The theory and composition of chess reflects both art and science. Playing the game is known to increase brain power.

Early forms of chess are thought to have originated in northern India or Afghanistan sometime prior to 600 A.D. The game first came to Europe via Italy and Spain from Persia through trade routes around 1000 A.D. Another theory suggests the game was brought to Europe by the Moors who invaded Spain in the 8th century. Vikings took the game further north to Scandinavia and Iceland. Chess as we know it today emerged in Southern Europe during the second half of the 15th century.

Today’s chessmen were given their names by Europeans who probably were unable to pronounce the Persian names for the pieces. The six different chess pieces offer a snap shot of medieval life with its ceremonies, wars, and grandeur. The king, queen, bishop, rook, knight, and pawn represent the very way in which the ordinary men and noblemen lived their lives during medieval times.

The next time you play chess, know that you belong to a beloved tradition extending through many generations and embracing many nations.

Numerous studies have demonstrated a link between chess playing and improvements in educational performance. From visualization and strategic thinking to enhanced memory and concentration, the benefits of chess playing are infinite. It is not surprising that children who play chess are able to process complex cognitive tasks, with data indicating that young children utilize higher-order thinking skills, analyze actions and consequences, and visualize future possibilities.

BOARD GAMES ARE GOOD FOR YOU

Did you know that playing board games can teach important social skills like verbal communication, being patient, sharing, taking turns and enjoying interactions with others? Games like Chess foster the ability to focus and lengthens the player's attention span. Playing games is an easy and excellent way to spend unhurried, enjoyable time together. They are also rich in learning opportunities.

3.9 out of 5 stars
3.9 out of 5
31 global ratings
How are ratings calculated?
To calculate the overall star rating and percentage breakdown by star, we don’t use a simple average. Instead, our system considers things like how recent a review is and if the reviewer bought the item on Amazon. It also analyzes reviews to verify trustworthiness.

Brenda Friend
1.0 out of 5 stars No 90 return, no gift refund, no 18th birthday present
Reviewed in the United States on March 5, 2017
Verified Purchase
I bought this item as a gift for my son's 18th birthday. When he opened it, the pedestal was broken from the base and is not a usable or displayable product. The costly consideration of this gift is huge for my family. I have now found that it is past the window of return, which for most stores is 90 days. 90 days is not up until March 22, 2017, the order date, or March 24, 2017, the received date. So much for shopping early to ensure that I purchased the unexpected by highly desired gift. If the purchase was a clearance item or highly-discounted item, I would just suck it up to stupidity of impulse purchasing. However, there was not a discount and well-thought out. Of course, there is not budget for another gift. This is the item that I purchased. https://www.amazon.com/dp/B01D5CXMAO/ref=cfb_at_prodpg
Read more

PhilS
4.0 out of 5 stars I like it, but I do not love it???
Reviewed in the United States on September 14, 2017
Verified Purchase
I love chess and I am good at it. But this one seemed a let down once I opened the box and assembled it. It felt more of a cheap toy vs. an iconic chess set from Star Trek. I still like it, but I do not love it. Plus the rules that came with it did not serve their purposes. I had to search the Web to find more information about the rules.
Read more
14 people found this helpful
Helpful
Comment Report abuse

Charles Rand Barnett
1.0 out of 5 stars Boards were crooked on two different sets.
Reviewed in the United States on July 31, 2018
Verified Purchase
I got a 1994 set off of ebay to save a buck. I was under the impression that the 50th anniversary edition was smaller. On the 1994 set, the bottom board was a little crooked. It looks like someone attempted to fix it. It's a huge distraction if these boards are anything but perfectly straight. The set was also disappointingly small. Almost unusable as a chess board.

So I decided to cough up the extra money and get the 50th anniversary edition. Well... They are identical in every way. On this one, the middle board was totally crooked. Way worse than my 1994 set. Totally unusable. I sent it back.

The color on the boards is stunning when the sun is shinning through them. The plating on the stand and the pieces is perfect. Brilliant. If they had made the scale bigger and did quality control on the alignment of the boards, this would be worth even more. As it is, these are totally unfit for display or play. I am keeping my 1994 set and displaying it, but I'm pretty unhappy about it.

RD
5.0 out of 5 stars Five Stars
Reviewed in the United States on April 16, 2018
Verified Purchase
Finally, I have one. I am ready to try it out.
Read more
4 people found this helpful
Helpful
Comment Report abuse

D. McQuestion
3.0 out of 5 stars Smaller than you think
Reviewed in the United States on September 19, 2016
Verified Purchase
I was disappointed at the size. I was thinking this would have been a full size game. From the product description, "The set towers over your table ...". Not. It is like 1/2 to 1/4 scale. Also the boards are plastic. For $270, it would have been a nicer touch if the boards were glass.
Read more
15 people found this helpful
Helpful
Comment Report abuse

Amazon Kunde
4.0 out of 5 stars Perfect collection piece for real fans.
Reviewed in the United States on June 4, 2016
Verified Purchase
I love it! Beautiful, great features, colors. The figures are outstanding. One star less of rating because the stand is from simple plastic, could be higher quality. I would have liked the original hight, but it still is very nice.
Read more
10 people found this helpful
Helpful
Comment Report abuse

Kay-lee Taylor
5.0 out of 5 stars Perfect gift!
Reviewed in Canada on May 29, 2019
Verified Purchase
Bought as a gift for a HUGE Star Trek fan. Perfect gift!
Read more
Report abuse
See all reviews