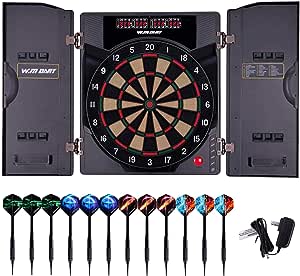 Visit the WIN.MAX Store
4.4 out of 5 stars 290 ratings
| 45 answered questions
Currently unavailable.
We don't know when or if this item will be back in stock.

Do not stop playing to keep scores, all you need is to enjoy the game with one clear, large LED display. WIN.MAX dartboard is equipped with LED display to provide real score and fair play. View up to 4 players' scores simultaneously using "PLAYER/PAGE" button on this extra large LED display.

There is no denying that you will get bored if you play the same game all the time. This electronic dartboard features 27 exciting games with 195 options for endless entertainment. Play against the computer with 5 skill levels or gather your friends and play in teams.

The WIN.MAX dartboard comes with everything you need to start the game. Contents include 12 soft tip starter darts, 40 soft tips, instruction manual, and power adapter.

Sound volume can be adjusted from 0 to 7. No matter if you practice or just play for fun, this makes it live as if you were taking a fierce competition. You can also turn off the sound if you find it annoying.

Have fun from the very first minute.

WIN.MAX comes with everything you need to start the game. Contents include 12 soft tip darts, 52 soft tip dart points, instruction manual, and power adapter. You can practice straight away and have fun with this popular game!

Precisely made barrels, by high tech CNC manufacturing, with knurls and deep cuts all the way through providing a comfortable,long-lasting firm grip.

Children must be accompanied by adults.

Please note: Darts tips manufactured by different factories vary from each other in quality and shape. It is suggested to purchase the WIN.MAX soft dart tips as replacement. You can find them by searching W.M Darts Accessory.

4.4 out of 5 stars
4.4 out of 5
290 global ratings
How are ratings calculated?
To calculate the overall star rating and percentage breakdown by star, we don’t use a simple average. Instead, our system considers things like how recent a review is and if the reviewer bought the item on Amazon. It also analyzes reviews to verify trustworthiness.

Ldkat
5.0 out of 5 stars Gorgeous set
Reviewed in the United States on March 4, 2019
Color: The New 2Verified Purchase
Dartboards were the main thing I bought this past year for my own home and as gifts for others. For some reason I just got back into playing darts and remembering how fun it's been since I was a kid. They make great gifts too for families to interact with each other and unplug from the phones for a while. I chose this board for my son and his family and gifted it to them yesterday (luckily it arrived before the party!) We all had a blast playing and challenging each other. I think this is the nicest one I've purchased this year. It's very professional and sturdy with a nice look. The darts worked well and were nicley weighted without any problems. Set up is simple and everything stores wonderfully inside so you can close it up when not in play. Great purchase snd lots of family fun. Highly recommended.
Read more
45 people found this helpful
Helpful
Report abuse

RJH
4.0 out of 5 stars Small annoyances but overall nice
Reviewed in the United States on October 24, 2019
Color: The New 2Verified Purchase
First the good. The dartboard plays very well, the darts stick and are much easier to remove than my old dartboard. The scoring is automatic, the voice is OK and the range of games is good. I also like that it has a pretty big catch ring, my old dartboard did not so this one has many fewer bouncebacks.
I like the overall design, the mounting strategy: 2 keyholes at back top, 16" apart is perfect for stud walls. The dartboard also has additional screwholes from the front that can give more security - this is a great feature since you have to pull the darts out and these holes prevent the board from moving.

Now to the not-so good. First there is a major problem with the instructions. On the first page it has a mounting diagram that shows 2 holes, 16" apart and 73" from floor. THIS IS WRONG!!! On page 2, in small print text, it has the correct height - 80". So of course, I looked at the diagram, mounted the dartboard (4 screws, 4 anchors) and it was 7" too low. Aargh. I had to start over and now have 4 extra holes in the wall.
Second, the AC adaptor (wall wort) had the AC prongs not extending out far enough so it didn't make contact when I plugged it into the wall. I had to take a pair of pliers and pull the prongs out farther and then it could work. There needs to be better packaging or quality control on that adapter.
Third, one of the dart barrels is not threaded correctly -too big - so you cannot screw in the tip/shaft. Yes I know the included darts are cheap but 11/12 is still not OK for spending $130 bucks.
Read more
12 people found this helpful
Helpful
Report abuse

Clinton R.
5.0 out of 5 stars Love the dart board!!!!!!!! The seller is very kind and nice
Reviewed in the United States on November 27, 2018
Color: The New 2Verified Purchase
Had a minor problem with the red game button due to a dart going between the gap of the button and board. The seller was very kind and promising which is very much appreciated.
Read more
45 people found this helpful
Helpful
Report abuse

Thomas Gram
5.0 out of 5 stars Highly recommended electronic dartboard
Reviewed in the United States on October 14, 2018
Color: The New 2Verified Purchase
I like this electronic dartboard! So much fun to play with my family and it is well made and big! It comes with 12 darts with 4 different colors. It can play up to 8 players. The head of the dart is plastic so it won’t be a risk for your child and you can play together. They gave me extra heads just in case it damage and I will have a replacement. I like everything about this dartboard. I think it worth the money and if you are looking for a good quality dartboard, this one is a great buy.
Read more

Jeff Svacina
5.0 out of 5 stars Very happy with this board
Reviewed in the United States on March 10, 2019
Color: The New 2Verified Purchase
Other than the darts that come with this (flight holders are plastic and break easily) been very pleased with the board itself.
Read more
32 people found this helpful
Helpful
Report abuse

Marvo
5.0 out of 5 stars Must buy !
Reviewed in the United States on December 25, 2018
Color: The New 2Verified Purchase
Nice dart board ! Met our expectations!
Read more
39 people found this helpful
Helpful
Report abuse

RButler
1.0 out of 5 stars The darts bounce off the board way to many times.
Reviewed in the United States on March 11, 2019
Color: The New 2Verified Purchase
I really researched this dart board and the reviews were good. I loved the look of the board and the options. However, when we got the board, it appeared it had been returned and resold. The tips were loose and everywhere in the box and one door was sprung and didn't close. We choose to overlook this. When we started playing, the darts would not stick to the board. We aren't new to darts. This is the second board we have owned. Two darts completely exploded. We had six different people play and everyone experienced the same thing. Several throws were played where no darts stuck to the board. I even ordered new tips but we are still experiencing the same situation.
Read more
6 people found this helpful
Helpful
Report abuse

Sasseefrass
4.0 out of 5 stars Far Superior Product, and a lot of fun!
Reviewed in the United States on February 20, 2020
Color: The New 2Verified Purchase
I've recently gotten into throwing darts, and found myself enjoying it. Years ago, we bought my son a cheap electronic dartboard for Christmas, which he never used. So I went and dug it out of his closet and mounted it on the wall. It was exciting at first, and the whole family began to have fun throwing darts together. There were several problems with it though. The biggest problem was that within just a short amount of time, the voice announcing players, scores, etc., started sounding fuzzy, and finally just quit. Occasionally, the computer would reset itself in the middle of a match. We would get many MANY bounce-outs.

Since we were having such fun throwing darts as a family, and since I had mentioned that I would be interested in getting a better board, my wife bought me this one as a surprise. It arrived nicely packaged, and easy to set up, with a clear instruction book. We love that it plugs in to the wall, so batteries getting weak will have no effect on game play. The cabinet is very nice looking--so much so that my wife approved mounting it in the living room!

The games are many, and easy to select! Also, you can select between 1-8 players, or even up to 4 teams. There are 7 loudness levels, and the hits are always recorded correctly. The voice is clear and easy to understand, but sometimes the synthesized voice makes you laugh, like the way it says "four." Doesn't affect the game though, and actually provides a bit of entertainment! It has two slots spaced 16" apart on the back to hang directly on studs, and then it has four other holes that are accessible from the front, which I put black drywall screws through. This secures the entire set-up to the wall very well, and makes it worry-free when removing your darts, or opening and closing the cabinet.

The only thing that was sub-standard were the shafts on the darts themselves, which is why I left a 4/5 star rating. They were the normal, cheap plastic shafts, connected to some nice metal barrels. One of the plastic shafts actually arrived broken, and two more broke on our first night of play. It wasn't that big of a problem, because we already had some other darts to substitute to continue play. With this in mind, I'd recommend buying yourself a set of twelve aluminum dart shafts with rubber washers at the same time you order this board. They're less than $10, will hold the flights more securely, and you won't have to worry about them breaking. The rubber washers will keep the shafts tight to the barrels, and make the whole set very nice to use.

Overall, I'm extremely pleased with this dart board! In my opinion, it's worth the price tag for how it looks, ease of operation, and quality of the product. There are far fewer bounce-outs with this board compared to my old one, and the variety of games and options are far superior.
Read more
2 people found this helpful
Helpful
Report abuse
See all reviews