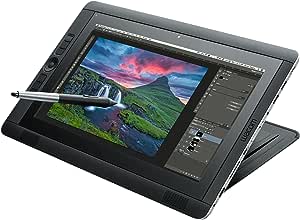 Share
Sell yours for a Gift Card
We'll buy it for up to $200.00
Learn More
Trade in now

Visit the Wacom Store
2.9 out of 5 stars 31 ratings
| 41 answered questions
Currently unavailable.
We don't know when or if this item will be back in stock.

The Cintiq Companion 2nd generation is ready to inspire the most demanding artists and designers, as it's a Cintiq Creative Pen Display when plugged into a Mac or PC via Cintiq Connect technology AND a powerful stand-alone Windows 8.1 professional creative tablet powered by Intel Core processors when you're on the go. Enjoy the superior natural pen-on-screen drawing experience and unleash the full potential of your creative software. With 2048 levels of pen-pressure sensitivity and the ability to detect the angle you hold it, the Pro Pen allows for serious artistry: every stroke, every line, rendered with finesse. Feel the friction of a natural pen-on-paper experience on a 13.3'' 2,560 x 1,440 QHD display with wide viewing angle, 72% NTSC and 16.7 million colors. Several unique features like the six customizable Express Keys, a Rocker Ring, on-screen controls, multi-touch gestures, a detachable 4-position stand and a Kensington Lock Slot match creative professionals' work style and increase comfort, productivity and security. Thanks to multiple communications, media and connectivity options - two HD cameras, two speakers, Wi-Fi, Bluetooth connectivity, two card slots for SDXC and Micro SD, three USB 3.0 ports, one Audio Combo port and one Mini DisplayPort - you can work and play with your Wacom Professional Creative Tablet anywhere and anytime you want.

2.9 out of 5 stars
2.9 out of 5
31 global ratings
How are ratings calculated?
To calculate the overall star rating and percentage breakdown by star, we don’t use a simple average. Instead, our system considers things like how recent a review is and if the reviewer bought the item on Amazon. It also analyzes reviews to verify trustworthiness.
Top reviews

Tom
1.0 out of 5 stars Shoddy product, poor service, and cash grab to fix .
Reviewed in the United States on October 4, 2017
Verified Purchase
Very poor product and customer service. After 17 months of light use the screen went blank. The unit works (can connect to an external monitor). Wacom only offers a 1 yr warranty on these units (which is understandable), but a display issue should not happen to something in this price range so soon. They quoted $840 to fix it out of warranty. I will not be buying any Wacom products after this experience.
Read more
4 people found this helpful
Helpful
Comment Report abuse

Karen Newman
1.0 out of 5 stars BEWARE, Wacom still hasn't worked out all the issues and their customer service is terrible.
Reviewed in the United States on August 20, 2016
Verified Purchase
Putting this at the top because it's a long review:

I am incredibly disappointed by the quality of the product Wacom sold me and angry about the abysmal customer service I received when I reported the problem to them.

I'm an artist who often works digitally and was tired of using my old Intuous 3 (which is still holding up just fine after many many years of heavy use) and I wanted to be able to sketch and paint in Photoshop without being tied to my desktop computer. I had a few friends recommend this product to me and I decided to go for it. That turned out to be a mistake.

During the very brief period where it worked, it worked quite well. However, Wacom has clearly not solved all of the issues plaguing this device. After just over one month of use (and barely even using it, I logged maybe 12 hours total) the display stopped working. I was working in Photoshop one evening and I put the tablet to sleep while I stepped away to take care of some chores. I returned an hour later and woke up the device to find that the art I had been working on was strangely ghosted onto the screen, and was stuck there. Okay. So I tried to turn it off and realized that you can't, as there is no hard "off" switch. So I let the battery die to see if that would solve the issue, but no, it did not. I rebooted it and the screen was indeed permanently stuck as a useless grey swatch. Great.

I'm no stranger to expensive technology having issues, as I've been a fan of Apple products for a long time and have had problems on occasion. It sucks, but it happens. Here's the difference: Apple has fantastic customer service and in my personal experience will always make it right. Wacom DOES NOT have this going for them, I've discovered. I contacted the company to report the issue to see if they could trouble-shoot for me and the rep I talked to was very pleasant and asked that I try to connect the tablet to another computer monitor to help them determine what the root of the issue could be. I did as they asked and tested it out on my friend's laptop and a monitor at my job. The display wouldn't show up on those screens either.

I called Wacom back (speaking to a different rep who was also very nice) and reported all of the same issues, even reminding them of what I had initially explained the first time around. After all of that, I was expecting to get info on how to send it back to them for a replacement or repair, but I still had a few more things I had to do for them before they would commit to that. He asked for proof of purchase, and that I take photographs of the front of the tablet with the screen turned on (it's understandable that they need proof of my claim) and the back of the tablet. The serial number is located on the back of the tablet and the photograph was clear and high resolution enough that you could easily zoom in and read it. I did as he instructed immediately after ending the phone call, because I obviously wanted to get this resolved ASAP.

Over 2 weeks (!) later, I received an email from that same rep asking for the serial number (why did I have to take that photo?). I'm annoyed, but I replied with the requested info. 4 days later, I get an email requesting that I "use this application to make sure we have the latest drivers available on your Companion" with a link to an application that scans the machine for the proper drivers. Again: THE DISPLAY IS NOT FUNCTIONAL, as established from the very first call! I cannot view ANYTHING on this brick of a tablet, so how am I supposed to run an application? I responded within 30 minutes of that email and despite the fact that the email from the rep said "I will be awaiting your reply" I have not received a response from them.

I contacted Amazon and even though they are not at fault in any way for this dysfunctional product, they have agreed to refund me all of my money even though the one month grace period for a return was already up. I was told it was because I have never made a claim like this in the past (customer since 2004). Thank you, Amazon.

Branigan
5.0 out of 5 stars Five Stars
Reviewed in the United States on September 9, 2016
Verified Purchase
Great performance and really like the drawing capability. Don't really care for Windows 8 but getting used to it.
Read more
5 people found this helpful
Helpful
Comment Report abuse

JAPrice
4.0 out of 5 stars Great for drawing.
Reviewed in the United States on April 12, 2016
Verified Purchase
Love drawing on this device. I love the express keys and the sturdy build. I hate the stand and Wacom really, really needs to come up with a better solution.
Read more
2 people found this helpful
Helpful
Comment Report abuse

Amazon Customer
5.0 out of 5 stars It's a great tablet.
Reviewed in the United States on October 23, 2017
Verified Purchase
Arrived as described.