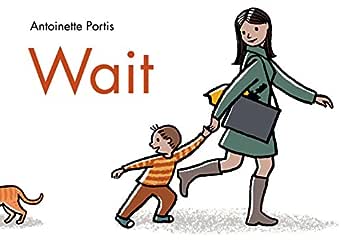 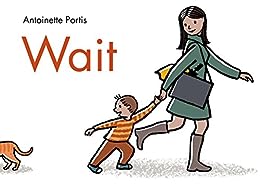 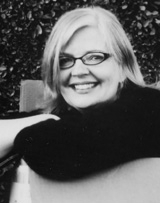 PreS-K—The conflicting agendas of a mother and preschooler play out in this classic scenario depicting a leisurely/rushed walk to the bus. Two of only three words employed in the text form a call-and-response pattern. Naturally it is the adult who admonishes, "Hurry!" The protagonist wants to greet a friendly dog, wave to the cement truck worker, and feed the ducks in the park. Portis's signature black outlines surrounding the people, creatures, and objects offer a pleasing clarity that contrasts with the softer, more amorphous backgrounds. Rendered in charcoal, ink, and pencil, with digital coloring, these scenes provide ample opportunity to follow the boy's lead, pausing to notice details, count things, and discuss colors, shapes, and signs. There is much to notice, such as the ladybug perched on the title page's "t"—drawing attention to the titular word itself. The insect or a replica of its form appears in surprising spots as the book progresses, as do other visual threads. One delightful scene places readers inside a tropical fish shop peering through an aquarium; the view aligns a fish's eye with the boy's. Pacing varies, controlled by perspective and the number of pages between words. After the mother exclaims, "Hurry!" three times in a row, as showers fall, the pair reach the bus. The imploring child gets the "Yes. Wait." he has longed for, however, when his parent notices the double rainbow. VERDICT Portis has a gift for creating rich visual narratives for young children; this one will resonate with their caretakers, too.—Wendy Lukehart, District of Columbia Public Library --This text refers to the hardcover edition.

“Portis has a gift for creating rich visual narratives for young children; this one will resonate with their caretakers, too.” ―School Library Journal, starred review

“Economy and affection give this story the dimensions of a classic.” ―Publishers Weekly, starred review

“Portis fills her friendly, accessible images with predictive details. Observant children will notice slickers, umbrellas, and other clues of things to come throughout the pages (is that a rainbow pop he points to on the ice-cream truck?), adding richness to this sweet story about appreciating life's simple pleasures.” ―The Horn Book, starred review

Antoinette Portis is the author of many inventive books for children, including Not a Box, a New York Times Best Illustrated Book and a Geisel Honor Book, and Froodle, which she published with Roaring Brook Press. She is also the recipient of a Sendak Fellowship. Wait is her second book for Roaring Brook Press. Ms. Portis lives in Southern California. --This text refers to the hardcover edition.
Read more