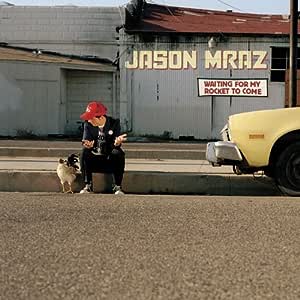 Secure transaction
Your transaction is secure
We work hard to protect your security and privacy. Our payment security system encrypts your information during transmission. We don’t share your credit card details with third-party sellers, and we don’t sell your information to others. Learn more
Details
Ships from
Amazon
Sold by
Record Plant
Waiting For My Rocket To ... has been added to your Cart

Save with Used - Very Good
$5.54
FREE delivery: Monday, March 15 on orders over $25.00 shipped by Amazon.
Ships from: Amazon
Sold by: azteka wireless

Waiting For My Rocket To Come

Twenty-five year old Jason Mraz made his first forays into the music scene at a young age, making the pilgrimage from Mechanicsville, Virginia to New York City at eighteen to study performance and music theater. Soon, he was honing his singer-songwriter skills busking on the streets of Manhattan. Eventually making his way to the west coast, Mraz now embraces what he calls a life of sleep, peace and poetry -- and hundreds of shows that have smitten thousands of fans. His debut album, Waiting For My Rocket To Come, is packed with witty, wordy, smart, funky and astonishingly catchy pop songs that do right by the best singer-songwriter traditions of Elektra. The album was produced by John Alagia, who has worked with the Dave Matthews Band and John Mayer, among others.

4.7 out of 5 stars
4.7 out of 5
427 global ratings
How are ratings calculated?
To calculate the overall star rating and percentage breakdown by star, we don’t use a simple average. Instead, our system considers things like how recent a review is and if the reviewer bought the item on Amazon. It also analyzes reviews to verify trustworthiness.
Top reviews

Elizabeth Lynn Gatica
4.0 out of 5 stars cool cd
Reviewed in the United States on June 20, 2019
Verified Purchase
my mom used to listen to this cd when i was a kid. I never listened to the whole thing but I liked tracks #3 and #5 as a kid. years after my mom threw this cd out the car window (due to it being scratched because of her reckless care for it) i decided to buy it again for nostalgic reasons. turns out this cd is a lot more important to me than i thought. turns out, track #3 sub-conscientiously shaped my love for cheesy sentimental early 2000s music which i grew to love oh so much over the years. I'm talking stuff like From Zero, Linkin Park, Incubus, Ill Nino, Finger Eleven etc. I know those bands are a lot heavier than Jason Mraz but i wouldn't have gotten into those bands if it weren't for this cd...probably. speaking of the cd, listening to it now, it's pretty ok. I still love track #3 just as much now but a lot of the tracks are pretty forgettable. track #12 is a new favorite of mine. overall, for it's cheap price and early 2000s nostalgia, i recommend it.
Read more
One person found this helpful
Helpful
Report abuse

RALPH PETERS
5.0 out of 5 stars The music is great; the guy is HOT
Reviewed in the United States on March 23, 2005
Verified Purchase
I agree with most of the rave reviews already posted - the CD is astonishingly good and is one I have purchased many copies of as gifts or luxuries (one for the car/house/work, etc.). Jason's voice is flexible and expressive and his often complex melodies complement his lyrics and his unique style. The music also has that rare gift of uplift; his voice and natural optimism seep into you without knowing and you find your spirit has risen since hitting PLAY. Jason Mraz also has the gift of humility and coolness - he is one of the few rock stars I would actually feel comfortable hanging with and watching him compose before casually asking to run your fingers through his hair. My only concern now is the length of time between new material (though the LIVE CD/DVD is a gift for fans, it doesn't break any new ground). No one wants to hurry the artistic process and end up with crap, but one feels that Mr Mraz has plenty left to say and doesn't need 3 years between new CDs. Let's hope. Between Jason and Howie Day, Gavin deGraw, Jack Johnson, Franky Perez, Ari Hest, the future of male singer / songwriters looks very promising.
Read more
9 people found this helpful
Helpful
Report abuse

janascally
5.0 out of 5 stars Wonderful Fun cd, but please see him LIVE
Reviewed in the United States on November 8, 2003
Verified Purchase
i've reviewed this album before-- essentially you will not go wrong with WFMRTC. jason dabbles in many styes: 70's groove and funk, pop soulful ballads, jazzy scats, and little country and roots.
but after seeing him perform live, i can not say enough about this smoking hot young talent! other reviewers have said that this studio recording, while quite good, can not do justice to the live versions of the songs. he is a consummate performer & entertainer. he loves to connect with the audience, instead of simply playing his songs.
some think he sounds like john mayer (they share the same producer, who has done a lot of Dave Matthews Band), but jason has the much more pure and elastic tenor voice. i still admire john mayer, but jason really outshines john in vocals and versatility.
you can go to jason's website:
[...]
to buy his live CD from 2001. recorded at Smoky Joe's. He is also recording another live CD (yeah)
Buy this CD and you won't regret it; you will play it over and over without getting bored! But you must see him perform LIVE in order to fully appreciate this great musician singer.
Read more
Helpful
Report abuse

Myk
5.0 out of 5 stars Huge Fan
Reviewed in the United States on June 29, 2005
Verified Purchase
I like this CD... it is, in and of itself, a work of art. Having said that, I am very much looking forward to the next CD due out in July in hopes that more of jason's onstage presence will be revealed in digital format. My husband gave me tickets to Alanis M's unplugged accustic concert in Phily and we went. We were about to decide that running late was no big deal, andI am VERY glad that we decided not to be rude to the openning act and skip it. We sat down, saw Mr.A-Z in lifesize letters on the stage, settled in for what we figured would be mediocre at betst performace from a local song and dance man. I was taken aback by this young man and his partner Dennis Toca. I dont take the following statement lightly, but this kid outsang Ms. M by a long shot. Alanis was great, but Jason made our night. Give me Jason and Dennis with a guitar a symbol and a drum anyday... they are simply amazing....You wont regret buying this one Jason is phenominal... keep your eyes out for the next one too.
Read more
5 people found this helpful
Helpful
Report abuse

Kristen E. Luckett
5.0 out of 5 stars Love this record!!
Reviewed in the United States on March 5, 2019
Verified Purchase
As first albums go, it doesn't get much better than this one. Start here, and follow Jason Mraz up to present day, and enjoy the musical journey.
Read more
Helpful
Report abuse

Elle
5.0 out of 5 stars A long time fan from the East to the West
Reviewed in the United States on February 1, 2020
Verified Purchase
Jason Mraz and I have lived in the same cities on the East and West Coast and I've still yet to meet him...but love this original LP.
Read more
Helpful
Report abuse

W. Marshall
4.0 out of 5 stars Love it
Reviewed in the United States on November 14, 2010
Verified Purchase
I recently discovered this guy, as to who he actually is. I didn't realize he was the one singing those songs I really liked on the radio when I saw a video of him and Colbie Colait (sp?). Then I started looking at his stuff on Amazon, listening to samples, and have now bought two of his CD's. This one has quite a few songs on it that I have heard on the radio not realizing who he was. The other songs I had never heard I like as well. His singing is so clear, and witty and fast at time, quite a talent.
Read more
Helpful
Report abuse

Pete G.
5.0 out of 5 stars I thought I was buying Will Smiths "Willenium" album. This was good too though.
Reviewed in the United States on April 17, 2014
Verified Purchase
I wass looking for some good "turn of the millennium" tunes so I hopped on A to the Z (that's what I call Amazon. Because it starts with an A and has a Z in the middle.) And bought what I though was Will Smiths "willenium" cd. I figured it was just mislabeled on the product page as a Jason Mraz cd. Either way, I listened to it and it turns out that It's not too bad.
Read more
Helpful
Report abuse
See all reviews

cassa
4.0 out of 5 stars Worth a listen to.
Reviewed in the United Kingdom on August 2, 2017
Verified Purchase
Heard this music being played by someone and asked them who it was.Bought the C.D. It's well produced original songs are very uplifting,cleverly sung .All the tracks are worth a listen.
Read more
Report abuse

harry
5.0 out of 5 stars Added to the collection
Reviewed in the United Kingdom on June 4, 2018
Verified Purchase
Good back catalogue cd
Read more
Report abuse

ernieinthemorning
5.0 out of 5 stars Early Mraz
Reviewed in the United Kingdom on January 19, 2013
Verified Purchase
Bought for my wife but then found we already had it. Watched him recently at the O2. Seems he has a huge enthusiastic almost cult following. Though an early album, has all the hallmarks of his unique style which he stamps on all his compositions.
Read more
One person found this helpful
Report abuse

Rohib54
5.0 out of 5 stars Jason Mraz
Reviewed in the United Kingdom on December 21, 2012
Verified Purchase
Simply one of the best singer/ songwriters (if not the best) to have come to light in the last decade. Music and lyrics brilliant.
I play his stuff almost daily and never get tired of it.
Read more
One person found this helpful
Report abuse
See all reviews