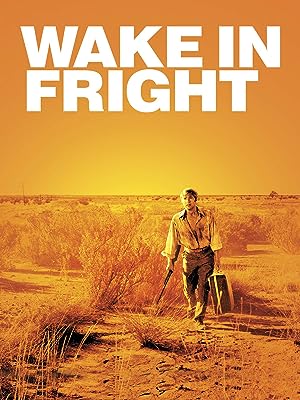 (182)7.71 h 48 min197116+
Directed by Ted Kotcheff (Rambo: First Blood, North Dallas Forty), the film tells the story of a British schoolteacher's descent into personal demoralization at the hands of drunken, deranged derelicts while stranded in a small town in outback Australia.

KBReviewed in the United States on April 14, 2020
5.0 out of 5 stars
Too close to home.
Verified purchase
Disturbing psychological thriller. That is the description, but why? A teacher deep in the arid Australian outback gets sidetracked in a mining town on the way to Sydney - but there is no danger here. In a thriller, the hero is waylaid by thieves, attacked by psychopaths, or unforgiving monsters of nature. The only assault on him is by congenial locals who all say "You new to the Yabba?" before offering drink after drink. It is offensive not to have a drink with a mate. Who is a mate? Everyone. A policeman shows him around. He has nothing else to do, there is no crime.
The teacher goes to gamble, and in that room filled with cash, there is only the honor system. Nobody takes more than their due. And he loses all his money.
Have a drink. In this movie, there is no antagonist. Except the hero. He is learned, urbane, well read, and thoughtful. And he is a moral blank. There is where the spiral occurs. And drinks with mates turn into nights and days, and nights. New to the Yabba? Not anymore.
There are scenes of animal cruelty which are, oddly, the kindest scenes the director could offer of the regular kangaroo slaughters in the outback. The crew sabotaged their own lighting to get the professional hunters to call it a night as their drunken shooting left hundreds of injured kangaroos in agony, anything to get them to stop.
Nothing destroys our hero in Wake in Fright. He is a man adrift from the start, kept on course by a nice suit and the books that give him guidance. Interesting how quickly one is lost at sea without a compass, tossed into the waves on a whim.

Deanna NaceReviewed in the United States on July 26, 2020
2.0 out of 5 stars
Depressing very depressing
Verified purchase
This was the most depressing movie I've ever seen in my life. It's about a man in Australia who substitute teaches. After the term ends he wants to go to see his girlfriend Robyn in Sydney. He needs to make a little more money so he can get there. He goes to a labor office but its closed. He can't seem to get out of the desolate town to his girlfriend in Sydney. He tries to gamble his puny paycheck to double it for the trip but of course he gambles it all. Everywhere he goes men buy him drinks. He ends up drinking until he drunk. All the men he runs into drink. He hangs out at bars. An unemployed alcoholic doctor buys him a drink & brings him to his place to stay but it turns out he is just squatting in a house. Drunks hang out there. Nobody knows who owns it. They all drink all day & night & kill kangaroos for food & sport. Nobody works. It gross. He finally becomes so despondent he tries to kill himself but misses & ends up in the hospital. He gets out of the hospital & ends up right back where he started- at his teaching job. The end. That's the entire movie. I do not recommend this.
2 people found this helpful

L. M. ButlerReviewed in the United States on March 23, 2020
4.0 out of 5 stars
Daring and difficult
Verified purchase
I gave it 4 stars because it is a daring piece for 1971 and the director goes all the way to the limit with creating astonishing, hard to watch scenes. I watched this movie twice to get the full impact and catch anything I missed the first time. There are a few scenes that I just close my eyes because i refuse to watch what happens again, yet I know it is happening. At first, you will find Gary Bond's character a bit flat. And maybe that's on purpose. Because later on you see a transformation( or revelation) in him that will jar you! They call it a horror movie. It is not your typical horror movie as we know them today. There are no monsters or aliens. The horror comes from the dehumanization of these characters, especially the main character played by Gary Bond. It kind of reminds me of "Lord of the Flies" only worse. I would call it more of a psychological thriller by today's standards, and believe me, it is ALL of that. So, I strongly recommend this if you like a serving of 'twisted' and 'out there'. Women might find this movie too overbearing. Men might enjoy or relate to it more so. Artistically beautiful to look at in color and tone. Animal lovers BEWARE. That's all I will say.
This is a 5 star movie for it's daring approach. But some of the scenes were too hard for me to take, and therefore I gave it a 4 star.
4 people found this helpful

Michelle D.Reviewed in the United States on June 17, 2019
2.0 out of 5 stars
BORING & strange. Let's throw in nonsensical, too!
Verified purchase
I can't really, or wouldn't anyway, give any type of detailed review or commentary on this picture. I'm not sure why people do that. There's a description of the movie given by Amazon to begin with. In my opinion these "comment" sections are for ppl to tell why they liked or disliked a movie, NOT to give you a play by play on every person, place or thing in each frame of the entire film. Go write novena's or plays. I cannot tell you just how many tries it took to finish this...abstract movie, as I couldn't stay awake til the end. I ultimately should seriously have given up. It's actually a classic trope of many of that era's films; that sort of European, artsy, someone's in a drug induced mania & then they toss a butt load of weird, crazy, trippy, nonsensical (sometimes scary or horror inducing) "flashbacks" & then someone's arrested, rescued by a random person who takes them to their hut in the forest & fixes them but won't release them, OR they jump off of a building thinking they're walking over to their dead Grams. Polanski comes to mind first, but this ain't no Polanski. This movie is absolutely perfect for insomnia. Oh yeah, and putting "fright" in the movie title does not a horror film make. 🙄😐
2 people found this helpful

GoughyReviewed in the United States on November 10, 2017
5.0 out of 5 stars
Booze soaked sun stroke
Verified purchase
A sort of horror tale where the monster is one's own unquenchable impulse to self-destruct. Heat, the brutal sun of the outback, sizzles orange unto the sparsely populated dust flats of Australia. Protagonist John Grant, a teacher on vacation leave, travels through the outback to Sydney but is ultimately stranded on route in the small nowhere town of Bundanyabba where a sequence of trivial events leads him into a nightmarish frenzy of booze, hangovers, and madness. No binge or bender put to film has quite equaled the terror of the one depicted in Wake in Fright. Fans of boozy cinema will appreciate the increasingly maniacal hijinks Grant endures as he falls into alcoholic despair with an empathy for waking in strange places confused and aimless. Startlingly dark, the film smolders with intensity, pulling you deeper and deeper into Grant's unpredictable spiral. The acting is quite believable and Donald Pleasance is a treasure, perhaps giving his best performance. The hellish fear of getting lost in the depravity of vice has never been so honestly explored as it is in this film adaptation of the novel of the same name. A masterpiece of Australian cinema, Wake in Fright is a thrilling ride that haunts long after the credits.
13 people found this helpful

JCReviewed in the United States on August 13, 2020
2.0 out of 5 stars
Disappointing - Some Spoilers
Verified purchase
I enjoy psychological thrillers, which is why I chose to watch this film. This movie does not fall into that genre; it is a drama. Watching men drink copious amounts of beer in stifling heat (no water??) & behave moronically became tiresome. I kept waiting for something exciting and/or interesting to happen. The scenes featuring the actual kangaroo hunting were stomach churning and sad. Jack's solution to his problem? Insulting and ludicrous.
I gave the movie two stars because it is perfectly cast.
Please respect my opinion. I have respected ones with which I disagree.

Boring, slow, a bunch of men drinking, fighting, gambling every day. They get drunk and slaughter kangaroos as a fun sport, maiming, torturing by cutting off their private parts, really sickening movie with no purpose but carnage laughing and screaming in delight at the suffering. The movie was all over the place, the script got lost several times. I hope Amazon takes this movie off their list and any others like it.

Robert The ConsumerReviewed in the United States on April 15, 2020
4.0 out of 5 stars
Not Bad But Really Depressing
Verified purchase
This has to be one of the most dark and depressing movies made. Geez, a nation of alcoholics for sure. The only place he was not offered beer was in the hospital. Very interesting character study with lots of also interesting supporting character actors. I actually enjoyed it. Wouldn't watch it twice but entertaining.
See all reviews
Back to top
Get to Know Us
Make Money with Us
Amazon Payment Products
Let Us Help You
EnglishChoose a language for shopping. United StatesChoose a country/region for shopping.
© 1996-2021, Amazon.com, Inc. or its affiliates