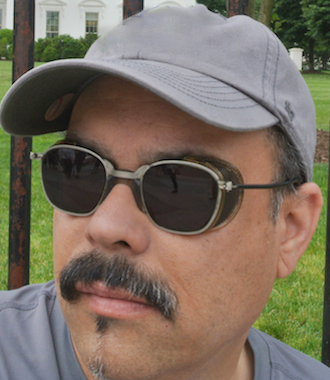 Wake Up Down There!, The Excluded Middle Anthology Paperback – Illustrated, February 25, 2015

Interested in "facts that don't fit" from an early age, in 1991, Greg Bishop co-founded a magazine called The Excluded Middle, which was a journal of UFOs, conspiracy research, psychedelia and new science. His first book, "Wake Up Down There!," anthologized many of the articles and features.  Greg's second book was "Project Beta: The Story of Paul Bennewitz, National Security, and the Creation of a Modern UFO Myth,"which documented a government campaign of disinformation perpetrated against an unsuspecting U.S. citizen. "Weird California," a portrait of strange and eerie history and places in the Golden State, was released in 2006. From December 2007 to November 2011, Greg blogged for the UFO and paranormal site Ufomystic. "It Defies Language!" released in 2016, is a collection of essays on UFOs, the U.S. government, and fringe issues and personalities.

His current podcast can be heard at radiomisterioso.com. Interviews with fringe-topic researchers and weird music are the usual fare. He has lectured at numerous paranormal conferences and meetings. He also flies paragliders and ultralight aircraft and is a licensed private pilot.

Johns
3.0 out of 5 stars A Few Highlights in a Generally Disappointing Compendium
Reviewed in the United States on January 6, 2005
Verified Purchase
When I first read this book I was quite impressed. Reading it again, in early 2015, I'm less impressed. There is an air of condescending smugness about it. The "Extraterrestrial hypothesis" is referred to as "A strange belief construction that seems to affect many MUFON members and others over the age of 40 or so." This seems to be aiming to be a hip book for fans of the likes of John Keel and Jacques Vallée. The book is a mix of articles and interviews. Most of it I just skimmed over. Ridiculous statements by interviewees are not challenged. There is a long interview with Karla Turner, who asserts, with regard to alien abductions, "I am confident of cases going back to 1905". The lady, to me, came across as mentally ill. She had no evidence to substantiate her assertions on the subject and arguably relied on so-called "dreams" as reliable sources for information. Another supposed expert on the subject of alien abduction is treated rather too kindly for my liking too. Richard Boylan is not pressed on his assertion that supposed alien abductees are "pioneers in an interspecies contact experience".

One highlight is the interview with James Moseley. He chats about the UFO scene and how it the late 90s it seemed that everyone was being abducted. He makes the pertinent observation that John Mack turned out to be a disappointment, who was "intellectually out of it. There was a sting in Time magazine about him, and how this woman named Donna Bassett surreptitiously posed as an abductee and fooled him completely." Moseley also, justifiably, takes aim at supposed abductions expert Budd Hopkins and the ridiculous case of the supposed abduction of Linda Napolitano, a case that might well be right about when he says it is "so patently absurd" and "pure drivel". Moseley, however, might have been a devious character in that he states his book The Wright Field Story was a horrible book that was fictionalised by Gray Barker. For an alternative viewpoint, I would recommend that chapter Hush Hush Jim Mosely of Barker's Men in Black: The Secret Terror Among Us. Also, Moseley announced The Wright Field Story in the Spring 1967 issue of Saucer News with these words: "Saucer News editor schedules UFO book for June 1967: Not wanting to remain any longer as the only 'leading researcher' who has not written a book, James W. Moseley announced in November that his long-awaited book will be published by Saucerian Press of Clarksburg, W. Va. in time for the New York Flying Saucer Convention. Moseley will reveal, in detail, how he saw secret Air Force files in 1953; his investigation of a captured saucer allegedly held at an Air Force base in Ohio; and other events in his 14 years of UFO research."

Other highlights are the interview with Ira Einhorn, the review of the book The Rebirth of Pan and the article about Wilhelm Reich and UFOs in the 1950s.
Read more
One person found this helpful
Helpful
Comment Report abuse

inner exile
4.0 out of 5 stars A still relevant overview of high weirdness
Reviewed in the United States on March 5, 2008
Verified Purchase
which is quite an achievement in and off itself, considering this is largely a reissue of multi-genred articles, nuggets of varying length and depth from the 1990s zine, supplemented with a never published virtual edition from 2000. The more engaging installments comprise plentiful interviews conducted by editor-in-chief Greg Bishop with - inter alios - the late courageous abduction researcher/activist Karla Turner; Dr. Mario Pazzaglini, an expert on alien writing whose decoded messages include gems like the one received by Betty Andreasson, "If you want to make light solid, show it to the Moon!" (p. 184); paranormal investigator and theoretician Dean Radin, Michael Grosso, parapolitics specialist Kenn Thomas (confessedly in the footsteps of Mae Brussell), Robert Anton Wilson (died in 2007), and the likes.

"Space ranger and captain of the starship 'Psychopath', crackpot historian" Adam Gorightly is also among the contributors, interviewing the controversial Dr. Andrija Puharich's colleague Ira Einhorn, a chum of fellow hippie counterculture tribesmen's like Abbie Hoffman and Allen Ginsberg, who was finally extradited by the French in 2001 for the murder of Holly Maddux. Gorightly also penned an essay on the Castaneda-craze in his unmistakable style, with a telling subchapter title 'BS as a fertilizer in the garden of truth' (p. 229).

Also worthy of mention are the posts by co-editor Peter Stenshoel probing the socio-psychological aspects of borderland studies; as well as a debriefing on the once clandestine outfit (now defunct or morphed into sg. else) ATPWG, short for 'Advanced Theoretical Physics Working Group', which connects such notorious characters as Col. John Alexander, Maj. Ed Dames, Dr. Hal Puthoff, Col. Philip Corso (not so by the way a rescuer of Nazi scientists under Project Paperclip), and possibly ufologist Jacques Vallee (pp. 389-92); plus Joan d'Arc's (of Paranoia mag) paper outlining the envisioned modification of humans for space travel (alternatively, read Robert Silverberg's 1993 sci-fi novel  Hot Sky at Midnight  as predictive programming?), John Carter's (= Adam Parfrey?) piece 'Remnants of Thule: Semitic Seeds in Nazi Germany,' & so forth.

The reader can also find interesting newsbits, film/video and book reviews, including the late great Jim Keith's (died under suspicious circumstances in 1999, like so many others) scathing assessment of David Icke's bestseller  The Biggest Secret: The Book That Will Change the World (Updated Second Edition) .
As for the downside, the large format renders the present compendium, with a few disturbing typos here and there, a bit unwieldy and less portable; whereas the smartarsing, pretentious fun-pun factor prevalent on part of certain authors at the detriment of genuine insight is a tad too much for my liking. Otherwise, well worth its price.
Read more
4 people found this helpful
Helpful
Comment Report abuse

Robert Emenegger
4.0 out of 5 stars well done interviews
Reviewed in the United States on November 2, 2012
Verified Purchase
A very useful exploration of thinkers, their work and insights. Good interviews by the author. I wanted to get more insight into some of those interviewed
Read more
Helpful
Comment Report abuse

DMcTwain
5.0 out of 5 stars Excellent collection for everyone, everywhere, always
Reviewed in the United States on April 11, 2013
This collection is great whether you are an anomalous phenomenon expert, weird curious, a bobbie or you just need something to meditate on while on the toilet. There are lots of various articles. Many are short to match your attention span, some are "very profound" and some are just right. Is it knowledge, is it entertainment, is it revelation or is it all just a big joke? YOU decide. Either way there is much here to keep you on the edge of your toilet seat.
If you can't find a way to steal it, I guess you'll just have to buy it.
Read more
Helpful
Comment Report abuse

Amazon Customer
5.0 out of 5 stars "Buy mine instead." --John Keel
Reviewed in the United States on September 6, 2001
Get this book!
Five of the articles included in this anthology just plain made me mad! That's why I gave it 5 stars. How many books can do that these days? There are about 85 pieces in the book, most originally printed in tEM (although there is an entire virtual issue included) with something for everyone. (And very likely at least one that will make you mad!)
The intellectual level of the discussion in the Excluded Middle is a lot higher than that found in other 'zines covering the conspiracy/UFO/weirdness communities. The anthology is definitely worth the purchase price, just as the magazine is worth seeking out. (It is unfortunately hard to get.) If you've never seen the magazine, get the book and see what you've been missing.
...and you gotta love any book edited while listening to both Captain Beefheart and The Who.
Get this book!
Now!
Read more
9 people found this helpful
Helpful
Comment Report abuse
See all reviews

Amazon Customer
5.0 out of 5 stars An important work
Reviewed in the United Kingdom on January 15, 2016
Verified Purchase
Love this collection plus Greg has an awesome podcast called Radio Mysterioso which is one of the best out there, highly recommended!
Read more
Report abuse
See all reviews