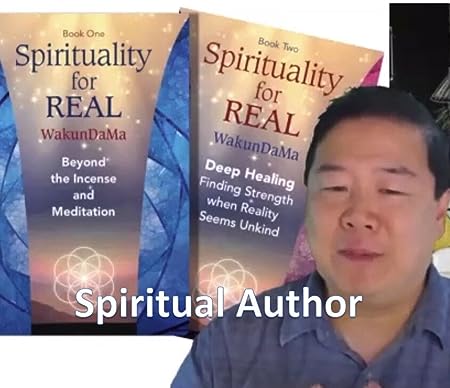 Wilson Cheung (also known as WakunDaMa®) was born in Still Water, Oklahoma in an area in the middle of former Native American territories. He was a somewhat sickly child in his early years, contracting the flu regularly every year, and like many, recovered by spending a day or two in bed getting rest. At the age of 14, he started working with visualization meditations to improve his memory and then discovered that it seemed to help him recover from the flu faster. On his first try, he noticed that he recovered in half a day. During the second onset of the flu, he recovered in 30 minutes. Later, he discovered that he was no longer getting the flu.

As an adult, Wilson has suffered greatly from severe depression and anxiety and while tackling this adversity, he practiced healing techniques on himself with a combination of body movement, art, meditations, visualizations, conventional psychology and practical spiritual tools which allowed him to organically recover from mental health issues and gradually stop using medication.

Some of what Wilson has discovered throughout his experience is that depression is actually a healthy response of your body from an unhealthy environment. He learned to embrace the wisdom of his body and be mindful of what his body is trying to tell him. With this mindset, he realized depression is no longer the enemy. Instead, depression became his partner.

In his 20's and 30's, most of his life was spent working in the corporate world as a computer and electrical engineer. At the same time, he continued to deepen his spirituality.

“In a high-pressure corporate environment, if you are tired, you are expected to drink more coffee and keep pushing yourself. But now I have a clearer connection to what my body needs. When I am tired, I simply take a nap. ” If tired is considered the problem. Coffee is the corporate solution. The truer, healthier solution is to strategize how to get more rest. That is the most sustainable solution.

In fact, tiredness is not the problem; Tiredness is the natural response to unhealthy demands.

By 2000 he started teaching courses on spirituality and meditation. He also started writing the first Spirituality for REAL book. It was during this time that his spiritual name, WakunDaMa®, was created. This name means "Horse that seeks to be of the Great Spirit," and fuses his ties to Native American spirits and his Chinese heritage with the Chinese Zodiac sign of the Fire Horse.

A few years later he enrolled in the Barbara Brennan School of Healing, hoping to start a new career outside of the corporate world. He graduated as a Barbara Brennan Healing Science Practitioner in 2015 and started seeing a limited number of clients in person and remotely over the phone.

Still hungry for more guidance, he joined a small group of working professionals for an additional five years of facilitated personal growth through the Pathwork transformation program. These experiences helped him strengthen the bridge between spiritual life and everyday real life.

In early 2019 Wilson started creating inspirational videos in the form of improvisational dance to "pop" music. These videos can be seen on Instagram, Facebook and YouTube if you search for the name "WakunDaMa." These same videos demonstrate the application of WakundaMa® Yoga to re-educate the tension of muscles in the body while having fun. WakundaMa® Yoga is introduced in his first book in the Spirituality for REAL series.

The Spirituality for REAL series covers Wilson’s experiences and learnings from over 30 years. The first book is dedicated to helping bridge the gap between skeptics and believers in spirituality. The second book builds upon the foundation of the first book. Wilson’s books sharpen the critical thinking of the believers while expanding the considerations of the skeptics. Both are needed as the foundation for deeper, real-life application of spirituality in the everyday real world along within the corporate world. His goal in this series is to share a way of being that allows people to hold the right balance of confidence and assertiveness alongside patience, gentleness and compassion.

Wilson Cheung is available for individual consulting by request. Otherwise he highly recommends you visit him, under the name WakunDaMa, on Instagram, YouTube and Facebook. You can also visit him at htps://WakundaMa.com 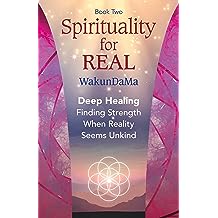 In Book two WakunDaMa uses careful thoughtfulness to arrive at rather surprising findings on how life works. To get to place WakunDaMa doesn't just accept findings from someone else, but goes on his own to develop and refine them with his own personal experiences. He has personally contemplated what he has uncovered with great attention, exploration, patience, and tenderness, to tease out exactly what each principle is that is at work.

A popular trend in self-help and life coaching is the idea that a key path to success is to find ways to immerse ourselves in positivity and remove negativity. This is sometimes referred to the "Law of Attraction". Words such as miracle are mixed in.

Instead of using "Law of Attraction" this book shows how a combination of the "Law of Magnetic Attraction" with the "purpose of life" gives a truer description of how life actually works. The truth is that all things that come to you are gifts, and you don't need to do anything special to achieve this. At times you may not like the gifts that are coming to you, but that's because you don't realize yet how special and perfect the gifts actually are.

There is an irony in life that the harder you try to achieve something often the less success you will have and then when you finally give up in frustration it suddenly comes to you in abundance. Once you can make the journey within yourself you will start to see you actually have nothing to do or change to achieve success. Once you can realize this you are able to let go, relax, and ease into synchronicity with REAL life. The final irony that is hard for most all to see, realize and accept is that you are actually already doing everything right -- but until you can come to realize this, it will NOT be right. But once you realize it, your purpose and divine purpose will be aligned and then rather unexpectedly you will see how all that has happened was perfect and that all is well.

Some specific topics addressed are:
• What to do with Fear and Pain?
• Walking towards fear instead of avoiding it.
• Why are there "nasty" people?
• Why are bad things happening to me?
• What's the purpose of Life?
• The actual equation that describes "Law of Magnetic Attraction"
• Why Self Love has nothing to do with either Selflessness or Selfishness?
• Why Selflessness and Selfishness are actually the same thing and both illusions?
• Why once you clear up the illusion of Selfless vs. Selfishness you can focus on the highest form of creating success for you, others and humanity world-wide. The highest form is surprisingly much simpler and ordinary than you might guess.
• Why achieving higher spiritual enlightenment is ACTUALLY NOT very important in spirituality because the basic experiencing of love and kindness is actually the end goal?
• Practicing gratitude versus actually feeling grateful.

This book uses many drawings to drive home some difficult concepts.
Read more
Other Formats: Paperback 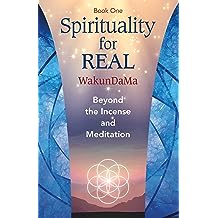 Spirituality for REAL: Beyond the Incense and Meditation Oct 13, 2019
by WakunDaMa
( 13 )
$6.99
When you hear Mind, Body, and Spirit the words sound kind of nice and one may think of Yoga, Chants, Incense, and Meditations in serene settings. Maybe you just think of a mix of eating well, exercising and going to a local place of religious worship. All of this is really just a pretty veil of spirituality. If one stops here one gets little benefit and then goes treating their real everyday life as very separate from the spiritual. The truth is that most don't know that REAL spirituality lies beyond this veil and is very much the cause and reason of the real life worries of everyday life.

The author, WakunDaMa, takes you on a journey that goes beyond the veil of Incense and Meditation practices. He shows you the actual reality of what it means to be spiritual and why it is actually everything to do with everyday life. The author, introduces you to Mind, Body and Spirit having a much more profound day to day impact on your life than you might ever think.

WakunDaMa applies his natural scientific skepticism that he grew up with and discovers and reveals things in a way that allows the beginner or skeptic of spirituality to start to see a new world open up.

He also provides longtime spiritual practitioners further enlightenment. He takes the approach of not accepting things because someone else says it was so but instead taking time to figure out things from personal experience, "common sense" and basic instinct. He also uses drawings very effectively to drive home some difficult concepts, and he includes very well-presented WakundaMa® Yoga sessions that can be of enormous benefit to the reader. Included with this book is over 1 hour, 13 minutes of the new Crying Meditation and Physical Movement videos available online at the website wakundama.com.