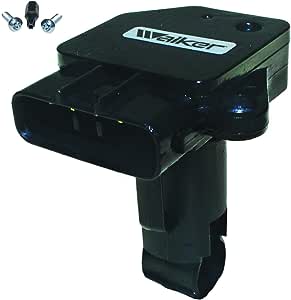 Brand: Walker Products
3.7 out of 5 stars 64 ratings
| 11 answered questions
Available at a lower price from other sellers that may not offer free Prime shipping.

Mass airflow sensors measure the amount of air by weight through changing voltages or frequencies and sends this information to the onboard computer. The computer uses this and other inputs to calculate the correct amount of fuel delivered. Symptoms of failure include poor starting, engine surging, engine stalling, a check engine light, and no-start conditions. Sensors are non-serviceable, replace sensors that are non-functional. Walker Products began supplying the fuel system needs of the automotive industry in 1946. Today Walker is one of the largest, privately owned manufacturers of fuel system components and engine sensors, and has served the needs of the worldwide automotive aftermarket. We are committed to supplying products manufactured to meet or exceed OEM standards and specifications. This effort is backed by our own manufacturing, product management and engineering staff to ensure it is maintained and accurate in the production of quality parts, vehicle applications, instruction sheets and technical support. Our products include Carburetor and Fuel Injection Repair Kits, Oxygen Sensors and other Engine Management products such as Throttle Position Sensors, Cam and Crankshaft Sensors, Fuel Injectors, Spark Plug Wires and Gaskets. As an ISO 9001: 2015/TS16949 certified company, we are committed to supplying the highest quality products. Vehicle Fitment: Jaguar Vanden Plas 2003-1999, XJ8 2003-1999, XK8 2002-1999, Mazda 3 2013-2007, 6 2006, CX-7 2012-2007, CX-9 2007, Saab 9-2X 2006-2005, Subaru B9 Tribeca 2007-2006, Baja 2006-2004, Forester 2008-2004, Impreza 2007-2002, Legacy 2009-2004, Outback 2009-2004, Tribeca 2014-2008

Mass airflow sensors ( MAF ) measure the amount of air by weight through changing voltages or frequencies and sends this information to the onboard computer. The computer uses this and other inputs to calculate the correct amount of fuel delivered. Walker Products began supplying the fuel system needs of the automotive industry in 1946.

Mass Air Flow Sensors are constructed with the strictest standards for quality and up-to-date technology. They are made with reliable and dependable materials to deliver consistent and reliable engine Performance in extreme temperatures. Direct replacement will restore your air intake system to optimal performance.

3.7 out of 5 stars
3.7 out of 5
64 global ratings
How are ratings calculated?
To calculate the overall star rating and percentage breakdown by star, we don’t use a simple average. Instead, our system considers things like how recent a review is and if the reviewer bought the item on Amazon. It also analyzes reviews to verify trustworthiness.

Amazon Customer
1.0 out of 5 stars Don't waste your money buying cheap
Reviewed in the United States on January 18, 2019
Verified Purchase
The two mounting holes didn't quite align to my 2005 Subaru (had to shave one larger about a mm) but it seemed to work great after that... For a month. Installed on December 1, started feeling strange power fluctuations just after the new year that got progressively worse to the point where the car was nearly stalling out at random times by mid-January.

Replacing this piece of garbage with a higher quality sensor has solved the problem.

Kevin c.
5.0 out of 5 stars Excellent product, excellent value
Reviewed in the United States on May 15, 2017
Verified Purchase
Bought this for a 2005 legacy gt, just what I needed. Very pleased with the quality. Product came with new screws and a bit to perfectly guide them in. This is a very thoughtful addition on behalf of Walker, because the size of the screws combined with ambient engine bay heating and cooling makes them more prone to stripping if you attempt to reuse.
Excellent product, excellent value. Don't spend your money on overpriced competitors.

Bob F.
5.0 out of 5 stars So far no problem
Reviewed in the United States on November 8, 2018
Verified Purchase
So far this maf is working fine, fits as good as the original sensor and for the price it's worth trying. If I have any issues with it I will update the review later.

Got this for a 2005 Baja Turbo that has been suffering random rich/lean fuel swings. One time last week it died out while driving on the freeway running way to rich and backfiring, then ran fine again a minute later. Has no engine codes but could likely be failing maf or O2 sensor. Had a maf fail in another subaru and it took along time of running poorly before it finally set a code for maf performance.

Lilly
1.0 out of 5 stars Garbage product.
Reviewed in the United States on June 19, 2020
Verified Purchase
There is no possible way that the product was factories tested before selling it. Plugged it in drove less than 30 mi and the check engine light came back on saying that the car was running too lean. I had my mechanic check it out and reconfirm that the mass air flow sensor by Walker is a piece of garbage. I had no codes prior to the mass air flow sensor code. I put my old one back into confirm and the codes came up different. I would not buy this product again. maybe one day they will make a quality product that they actually test before selling.
Read more
Helpful
Comment Report abuse

Update June 2018: So a little over a year after purchase, this part failed. Still, think its worth it as the OEM is $190, so I can buy this 4 more times before it comes close that price. My OEM one failed after 2 years before I purchased this one.

Amazon Customer
1.0 out of 5 stars Returned
Reviewed in the United States on May 18, 2019
Verified Purchase
Seems to work ok, but still gives a code. It seems like half of that sensor does not work, and that half is the air temperature monitoring part. Returned and got Denso, no more codes.
Read more
One person found this helpful
Helpful
Comment Report abuse

Carl Rogers
5.0 out of 5 stars Great deal
Reviewed in the United States on May 12, 2017
Verified Purchase
Perfect fit for my 2006 Subaru and much cheaper than other options. I just installed it, so no sense of how long it will last, but it fits and works. Great price in comparison to others.
Read more
4 people found this helpful
Helpful
Comment Report abuse
See all reviews
Pages with related products. See and discover other items: 2005 subaru legacy outback, 2006 subaru impreza wrx, crosstrek sti, 2007 subaru wrx parts, 2006 subaru wrx products, 2009 subaru impreza wrx parts