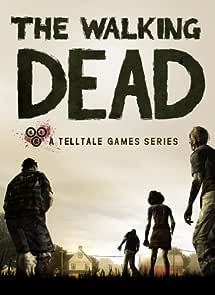 Brand: Telltale Games
Platform : Windows Vista, Windows XP, Windows 7, Mac OS X 10.6 Snow Leopard |
Rated: Mature
| DRM: Steam
4.3 out of 5 stars 358 ratings
Currently unavailable.
We don't know when or if this item will be back in stock.
Note: After purchase, you can access the item in Your Games Library.
By placing your order, you agree to our Terms of Use.
This product is non-returnable and non-refundable.
Note: Currently, this item is available only to customers located in the United States.

Gain access to the full season [5 episodes] of The Walking Dead by purchasing the Season Pass, which will act as your gateway to obtaining all of the episodes in a dark and emotional season where every decision and action can result in the entire story of the game changing around you.

Episode 1 is available immediately upon purchasing the full season with the remaining episodes being delivered periodically thereafter. Updates will automatically be downloaded and applied via the Steam client, which will allow new episodes to appear in the in-game menu.

The Walking Dead is a five-part game series set in the same universe as Robert Kirkman’s award-winning comic book series. Play as Lee Everett, a convicted criminal, who has been given a second chance at life in a world devastated by the undead. With corpses returning to life and survivors stopping at nothing to maintain their own safety, protecting an orphaned girl named Clementine may offer him redemption in a world gone to hell.

A continuing story of adventure horror spanning across 5 episodes.

Steam account required for game activation and installation. This title is SteamPlay enabled.

4.3 out of 5 stars
4.3 out of 5
358 global ratings
How are ratings calculated?
To calculate the overall star rating and percentage breakdown by star, we don’t use a simple average. Instead, our system considers things like how recent a review is and if the reviewer bought the item on Amazon. It also analyzes reviews to verify trustworthiness.
Top reviews

Nerfalus
5.0 out of 5 stars Amazing! The most emotionally engrossing game I have ever played
Reviewed in the United States on April 3, 2013
Platform: PC/Mac DownloadVerified Purchase
I am a big fan of the Walking Dead TV series which led me to be interested in this game. I had a friend rave about this game but it was only once I had played it for myself that I found out what he was talking about. This is a game that took me through the full spectrum of emotions. I laughed at Duck's anticts, I nearly cried at the emotional decisions and goodbye's, I was shocked by the actions of people in the group and I even raged at the cruel cruel choices and losses I had to experience. To put it quite frankly, this was a gaming experience like no other and will be something I remember for many years to come. I feel confident in saying this was the best story telling I have seen in a game. I nearly shed a tear at several points in the story, and found myself yelling out in frustration and shock on more than one occasion. I won't spoil any of the story for you, if your reading this review, but get a friend to play as well so that you have someone to talk to and share your experiences with ( or a good therapist if you don't have any close friends, you'll need it LoL). If you are thinking about this game, don't think any longer.....get it and prepare yourself for an emotional roller coster and some of the most gripping story telling you have ever experienced. Thank you Tell Tell games for making such a wonderful game, and I really hope you make more (and darn you for ripping my heart out time and time again).
Read more
2 people found this helpful
Helpful
Comment Report abuse

Joseph Sweet
5.0 out of 5 stars Well worth it.
Reviewed in the United States on June 17, 2012
Platform: PC/Mac DownloadVerified Purchase
I was a little skeptical going in of buying five episodes in advance and only getting one at a time as they came out. But, I was very pleased with the quality of the game. It will be a bit awkward for those of you who are into games like resident evil and silent hill, but it's not that type of game anyway. The characters are much more realistic and the story darker. If you read the comics, you should be more than pleased with this adaptation that draws on characters from there, as well as a bunch of new characters, and even gives you some background story on some of them. Glenn was in the first episode before he goes back to Atlanta and meets up with the others. But I think one of the biggest things that separates this from other games is how much you affect the storyline with the choices you make. The others learn and adapt to those decisions, and while you build friendships with some, you will be making enemies of others. And who knows in life or death post zombie apocalypse situations, which of them you just may need to rely on later, or who you may need that you let die earlier on. At the time of writing this, I am still waiting for episode two which is set to come out later this month, but if it is as good as episode one, it's well worth the wait. I found the controls to be a bit odd, being used to both first and third person full roaming games, but that awkwardness, getting used to the controls, made those sudden moments where a decision needed to be made, or action was called for, all that much more tense. With only seconds to spare you will fight to the death with zombies, and make critical life changing (or ending) decisions. And those decisions will matter a great deal in later episodes and sometimes within minutes of making them. This is an awesome adventure for anyone into this type of storyline, especially fans of the comic that want a new and interesting tale set in the same world as The Walking Dead comic and even intersecting the stories of some of the characters from that before we saw them there. You definitely won't be sorry that you spent the money.
Read more
2 people found this helpful
Helpful
Comment Report abuse

Shrubbin Cole
4.0 out of 5 stars Surprisingly good
Reviewed in the United States on February 4, 2014
Platform: PC/Mac DownloadVerified Purchase
So... I expected this to be like the show and I was mistaken at first until I realized how similar they really were. I started liking characters and getting attached to them as I get on the show, starting to doubt my choices cause I think the other chance would probably make the story progress more... you do choose your own adventures and you can make the story very bleak or exciting.

This is an INTERACTIVE novel and should might as well be considered that way, don't think this game is Left For Dead. You have to fight your way out but it's not hacking and slashing, there's mainly dialogue with some self defense.

Cons:
Replay: My boyfriend played before I did and we're on the opposite sides of the moral spectrum, I'd do things that he'd never do... so naturally I thought we'd get different story progressions and endings.
This was not the case, as I replayed levels just to save a character or just be a jerk to a character... didn't matter much.

*I couldn't walk away much, which isn't necessarily bad. If I got a refill of a drink there was a 50% chance that I missed important dialogue.

*You're as influential as you think, but not as much as you expect to be.

Still loved the ending <3 Gonna play it again, maybe there is another ending I missed!

MichaelParrish
5.0 out of 5 stars A game that will draw you in as the story unfolds
Reviewed in the United States on September 15, 2013
Platform: PC/Mac DownloadVerified Purchase
A great game. It's that simple. I went into this game with a love of the TV show and the comic, but unsure what to expect. In short fashion I was completely rapt in a story of a man caught up in the outbreak of a zombie apocalypse trying to care for young Clementine - a girl left alone in the wake of the outbreak by her parents - and the story of their journey to find some semblance of life, safety and sanity in that new world. Along the way, you'll meet some familiar faces from the story fans already know, but it's mere nods to the existing canon and not intrusive or shoehorned in. It goes pretty far to flesh out the backstories of those existing characters as well. At the same time, the story unfolds paying out in complete mini-stories like an issue of the comic or the television show, but grabbing you by the heartstrings as Lee does everything he can to protect young Clementine. Caring this deeply about characters from a game is extremely rare, but as the final episode of this series played out, I found myself disappointed that it had to end. Don't get me wrong. The ending/finale made perfect sense and was very satisfying, but I'd really grown to care about these characters, and I wasn't ready to walk away yet. To me, that's the hallmark of a great game.
Read more
Helpful
Comment Report abuse
See all reviews