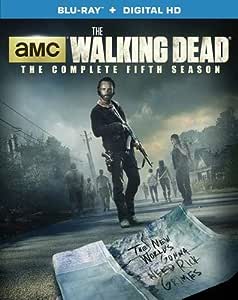 Season Four of The Walking Dead ended with Rick and the group outgunned, outnumbered, and trapped in a train car awaiting a grim fate.

Season Five picks up shortly thereafter. What follows is a story that weaves the true motives of the people of Terminus with the hopeful prospect of a cure in Washington, D.C., the fate of the group's lost comrades, as well as new locales, new conflicts, and new obstacles in keeping the group together and staying alive.

Stories will break apart and intersect. The characters will find love and hate. Peace and conflict. Contentment and terror. And, in the quest to find a permanent, safe place to call home, one question will haunt them...

Who do they become?

4.7 out of 5 stars
4.7 out of 5
12,776 global ratings
How are ratings calculated?
To calculate the overall star rating and percentage breakdown by star, we don’t use a simple average. Instead, our system considers things like how recent a review is and if the reviewer bought the item on Amazon. It also analyzes reviews to verify trustworthiness.

Amazon Customer
5.0 out of 5 stars A lot happens this season
Reviewed in the United States on August 6, 2020
Verified Purchase
There is a lot that goes on this season with the loss of four main characters, the group's experiences at Terminus and on the road, and their arrival at Alexandria. I think the season holds up well even though I feel the writing was stronger in Seasons 3 and 4. For the most part, the character development stays true to what has already been established though it is more difficult to become attached to some of the newer characters that weren't a part of the core group from the beginning. It has some rough patches, but overall I really like this season.
Read more
Helpful
Comment Report abuse

The story line continues very strongly from last season and is often more entertaining than the graphic novels this series is based on. I was very fearful for one main character, who had been killed in one of those graphic novels. I have to wonder if the real life actor's contract prevented that from happening. Maybe? Hopefully, it was based on the character's appeal and importance to the storyline. I know, for me, the loss of this character would severely hurt my enjoyment of the show to an even greater degree than Dale's demise. The loss of two such appealing characters might hurt viewership and could conceive of AMC putting the kabod on that, its just too important to their bottom line, with the immense commercial success of this show.

I loved the laws of physics defying tank explosion with flying, burning walkers. However, annoyingly, a few scenes didn't work, like the fallen man who seemed uninjured and very strong, crawling (not all that frantically) backwards on the ground, when he could have easily scrambled to his feet and run; then suddenly a cut scene of a zombie chewing close to but not on his hemorrhaging, but 'unchewed' face. And another scene where a woman has her neck bitten, showed an unconvincing prosthetic wound. But those are only small detractions. Almost all other scenes with special affects, like the trough scenes, were spectacularly and convincingly gory.

I was very pleased with the ending which reintroduced an old character, I thought was gone for good. I'm expecting an entertaining story line around him. The ending also leaves us in some suspense for the next episodes, My guess is our refugees are headed to D.C.

The characters continue to become more strongly defined and more appealing, like Rick, who now has evolved into a far more decisive character, a point made by The Talking Dead show that follows after each episode on AMC. The same applies to many of the other main characters whether they're likeable or not. I'm especially curious about the scientist's storyline. Will his character continue as in the graphic stories or evolve differently?

The show continues to emphasize diversity in its cast, with ongoing and evolving, strong story lines for minority characters and women, just as the graphic novels do. Bravo.

St. A Boiler
5.0 out of 5 stars Worth the price of admission
Reviewed in the United States on August 26, 2015
Verified Purchase
Late to the game Walking Dead junkies here. My wife and I had been talking about starting a new series. We hate to start a new one until it is up and running because sure enough, a few episodes in and it seems they get dropped leaving you wondering who killed Laura Palmer. Well with five seasons we felt that if we liked it we had a good six months of entertainment ahead of us... that was three weeks ago.

We have Netflix and Seasons 1-4 are all free on Netflix so I assumed we were good. But about 18 days and four seasons later (no lie) my wife demanded, I won't say she would shiv me in the brain if I didn't, but she certainly forcefully demanded that I immediately order the next season. I did, and four days later it was consumed. I am assuming if you are looking at Season 5 you already know what to expect. But for me, for us, what to expect and the Walking Dead are two different things. Every other promising show (Lost for example) may have a great first or second season but after that we just sit and wait for the end of season cliff hanger, will the one character survive. No spoiler here... you just never know. People are people and when you think you know the way they are they are living in a zombie apocalypse so they just might wind up a little different than you think. Otherwise normal people may be pushed past a limit and otherwise passive people may step up. In other words, if you missed Season 5 and are awaiting Season Six do not hesitate, pull the trigger (or the bow string), for the price of a couple of IMAX tickets you get an entire season. Well, well worth it.
Read more
Helpful
Comment Report abuse

Anonymous Customer
5.0 out of 5 stars FINALLY!!!
Reviewed in the United States on October 16, 2014
Verified Purchase
I have been waiting (impatiently) for the start of season 5 of TWD. Have been a rabid fan since the first episode. And this episode ranks in my top five..perhaps number one. The suspense! I cannot think of another episode where I held my breath so many times. The end was superb, so gut-wrenching emotional, it made my eyes water. (Okay, I admit it..I cried..satisfied?) Of course, Carol and Daryl are my fave characters. Who DOESN'T love Daryl..remember *If Daryl dies, we riot!* (I have been a Norman Reedus fan since Boondock Saints as validated by my 3 ft. framed movie poster.). But if you don't like him..do NOT post it here unless you want a cyber lynching..lol! And Carol is the toughest walker (and other evils) assassin...right up there with Michonne.
But even poor Rick, at the end, made one (or several tears) fall. Loving it!! Bring it on TWD! *There are NO spoilers here.
Read more
6 people found this helpful
Helpful
Comment Report abuse

Ryan Anderson
5.0 out of 5 stars Wolves Not Far
Reviewed in the United States on July 24, 2015
Verified Purchase
Man, what can you say! I love the diversity of episodes this season. Some episodes to drive the story forward, some to explore our characters in depth, some episodes shot more artistically, and some more viscerally. I love that women and people of color are treated like important, fully conceived characters on this show. I love that 3 women can share a combat scene together without being treated like girls in distress. I love how this season explored the psychology and morality our favorite characters and the individuals populating the apocalypse remains of America.

After finally binge watching this season I am definitely looking forward to the challenges foreshadowed in the next season.
Read more
Helpful
Comment Report abuse
See all reviews

jcmacc
4.0 out of 5 stars Great Walking Dead Season
Reviewed in the United Kingdom on April 22, 2019
Verified Purchase
A great season of the Walking Dead, beginning with the nightmare of Terminus, ending up in Alexandria after an adventure based around the Grady Memorial Hospital. Rick Grimes continues to grow as a dramatic character, all his morally dubious actions being both understood within the drama due to his clear motivation but also recognised as troubling all the same.

As with all Walking Dead seasons, image quality on Blu-ray is grainy as that is the way it was shot, so hardly a reference disc to show off your hi-def set up. Extras are good with audio commentaries on some episodes and decent behind the scenes features - best watched after you've seen all the episodes to avoid spoilers.
Read more
One person found this helpful
Report abuse

Peter Savage
5.0 out of 5 stars Brilliant series.
Reviewed in the United Kingdom on May 27, 2019
Verified Purchase
I did not expect this zombie series to be so gripping, despite all the gore and violence. It is the behaviour of the survivors - not the zombies - that make it so fascinating. I am on season 7 now and it is still excellent.
Read more
Report abuse

Bradley Jones
4.0 out of 5 stars Good season
Reviewed in the United Kingdom on May 5, 2020
Verified Purchase
Season 5 starts off great with an action packed first episode escaping Terminus then settles into a slower character driven pace for the first half and picks back up in the second half with the group arriving at Alexandria followed by the new villians the Wolves and the return of Morgan. one of the best seasons of the show.
Read more
Report abuse

Eliomar
5.0 out of 5 stars Great watch
Reviewed in the United Kingdom on January 6, 2020
Verified Purchase
The best zombie series out there. TWD season 5 isn't the best of its seasons but it's just before it started going down hill
Read more
Report abuse

Emzzzz
5.0 out of 5 stars Zombies galore
Reviewed in the United Kingdom on November 16, 2017
Verified Purchase
The fifth season in the Walking Dead franchise, complete with tales of woe and hardship from Rick and the gang.
Excellent quality, no complaints.
Great zombie plot.
Read more
One person found this helpful
Report abuse
See all reviews