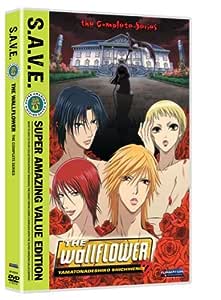 The Wallflower - The Complete Collection S.A.V.E.

After years of sponging off a fabulously wealthy older woman, four ridiculously beautiful boys are confronted with the most horrifying challenge ever: use their bishi skills to turn their benefactor's socially challenged niece into a beautiful young lady or start paying rent! And this isn't just any ugly duckling they're facing; she's a psycho, paranoid, neurotic horror movie obsessed goth chick with a fetish for anatomical dummies, bad skin and a total ignorance of all things feminine! (And those are her better points!) But hey, rent's expensive and job openings for pretty boys are scarce, so our poor heroes are going to have to suck it up and attempt the ultimate combined exorcism/spa/makeover from hell! It's a Queer Eye FTSG of doom as the infamous Nabeshin unleashes The Wallflower!

4.7 out of 5 stars
4.7 out of 5
164 global ratings
How are ratings calculated?
To calculate the overall star rating and percentage breakdown by star, we don’t use a simple average. Instead, our system considers things like how recent a review is and if the reviewer bought the item on Amazon. It also analyzes reviews to verify trustworthiness.

Seattle Person Who Loves Anime and Classic Film
5.0 out of 5 stars Ignore the silly cover art, this is a fun anime!
Reviewed in the United States on July 21, 2020
Verified Purchase
Ignore what some marketing person thought was best to use as cover art and as a write-up. Yes, the producers did tend to use that kind of art in the title opening and occasionally in the first couple episodes. But this anime is a hoot! It is over the top comedy, almost to the point of screwball comedy, where the heroines (plural), when riled, are the one who rescue the guys in distress.

Why are they in distress, because it's a switch roles comedy where the guys are so gorgeous that they end up dealing with what a lot of women have to constantly deal with (especially the one without any money or power to protect him) i.e. harassment and degradation. I imagine most men won't like a comedy like this but I'd say women will get the underlying joke and appreciate it.

Definitely an anime I enjoy watching over and over again. Even if the main heroine is a more than a little 'morbid' (shudder!).
Read more
Helpful
Comment Report abuse

A. Nony Mouse
3.0 out of 5 stars Not what I was expecting based on the cover and description
Reviewed in the United States on August 21, 2020
Verified Purchase
As with a similar recent S.A.V. E. review, I was generally disappointed in the story line and the associated artwork.

In this instance, the artwork ranged from beautifully detailed renderings to minimalist treatment of the protagonist, once again being somewhat out of place to my Westernized expectations.

Not that it was not a decent enough concept, but the execution of it seemed somewhat lacking in certain areas.
Read more

A. Bowing
4.0 out of 5 stars Creepy Comedy!
Reviewed in the United States on December 30, 2015
Verified Purchase
If you are into dark, comedic romance, then you might like this series! It is about 4 beautiful guys that need a place to stay and this Aunt strikes a bargain that if they can turn her niece into a woman then they can stay and have a roof over their heads. How hard can it be? Well, if you're friend is a medical skeleton and organs in jars then VERY. This girl is seen as a super creepy "ring-like" chick with no chance at becoming a woman. But that is not a deterrent for the guys. Hilariousness ensues and love blossoms!
Read more
5 people found this helpful
Helpful
Comment Report abuse

Rick Dooley Sr.
5.0 out of 5 stars Pretty boys put to the task.
Reviewed in the United States on August 13, 2010
Verified Purchase
The Wallflower is a great series, four pretty boys put to the task of turning their landladies niece into a lady or pay triple the rent. Sounds easy enough ,right? Wrong! Think Ouran High School Host Club meets The Addams Family and the girl from The Grudge. The guy that ' tamed the shrew' had an easier job.
Sunako shuns everything 'light' and ladylike after being insulted in the opening scene. She prefers to spend her time locked in her room watching gore films with her anatomical dummy friends and eating junk food .
This show is hilarious with episodes ranging from the obligatory school cultural and sports festivals , to trips to a spa , to kidnappings and a gruesome murder.
I agree with the other reviewer in that the earlier episodes are a little better than the later ones but they are still very entertaining and keep you hooked. The only gripe I have is with the last episode , it almost felt rushed and to me was the weakest of the series.
If you want a good reverse harem comedy , that I personally liked more than Ouran , then you should check out The Wallflower.
Read more
9 people found this helpful
Helpful
Comment Report abuse

Britany
5.0 out of 5 stars Great Anime
Reviewed in the United States on February 22, 2014
Verified Purchase
I don't want to go into great detail about the actual series because I don't want to spoil it. I will sum it up though as very light hearted and funny. All the Charcters are totally loveable and I really don't have a bad thing to say about it. Shipping was very quick. I literally got it two days after I ordered it and got it well before the projected day I was suppose to get it. The packaging was surprisingly decent I figured for such a good price they probably cheaped out on it but they didn't. When I opened it all the discs were still securely in place and I really couldn't he happier with this product!
Read more
5 people found this helpful
Helpful
Comment Report abuse

mary
5.0 out of 5 stars Love it!
Reviewed in the United States on April 4, 2011
Verified Purchase
This is a great anime for people that like drama, random humor, and a little bit of romance. This show is slightly reminiscent of Oran Host Club but is a lot weirder lol. The characters in Oran are normal but have past issues that make them a bit quirky, however you always have Haruhi as your sane, grounded character. The Wallflower is about 4 beautiful boys who all have issues because of their looks and the main girl character is far from grounded. She is a lover of darkness and goor and can't stand to be in the light of beautiful people. Her Aunt wants the 4 boys to turn her into a beautiful lady and thus drama and comedy in sue. I would suggest this anime for people that liked Oran Host Club for the same "family bonding" experience but would say don't get it if you want more of an earth bound, normal approach to that bonding.
For people that have never seen Oran Host Club, this show is basically about a girl that had someone call her ugly and now is determined to not care about her appearance to the point where she cannot be in the presents of beautiful people without collapsing and getting a nose bleed. As time goes on in the show, the 4 boys and a few other characters find they may even like Sanako (the "Ugly Girl") better the way she is. The 4 boys and the 1 girl have to coexist in a mansion and eventually form a family like bond. This is a very funny story with a little romance, some drama and a few really kick butt fights.
Read more
2 people found this helpful
Helpful
Comment Report abuse

J. Loo
4.0 out of 5 stars Pretty Boys vs. Horror Recluse Girl
Reviewed in the United States on January 31, 2013
Verified Purchase
This series was a lot funnier than I had originally given it credit for. Both the pretty boy and the horror girl points of view were played well against each other. This isn't really a fan-service or harem type of show because each character has a different love interest. Still, there are very funny, LOL spots in the story. Plot: The boys are living in a mansion owned by an eccentric woman and they are financially cut-off from their parents. The deal is this, they have to turn her reclusive, horror-otaku niece into a "proper" lady within a certain amount of time, or the amount they have to pay for rent will triple, including back rent!
Read more
2 people found this helpful
Helpful
Comment Report abuse
See all reviews

Rebecca Bridge
5.0 out of 5 stars Great if you like handsome anime guys and a quirky girl
Reviewed in the United Kingdom on March 26, 2013
Verified Purchase
I had watched this anime previously and loved it so had to buy it. Likeable characters and an entertaining story
Read more
One person found this helpful
Report abuse

Jenn (from the East Coast)
3.0 out of 5 stars It's Okay
Reviewed in Canada on November 19, 2012
Verified Purchase
It's an okay show.
I found that the characters never developed and that the story really didn't go anywhere.
I wouldn't recommend paying full price for this.
Amazon had excellent service as per usual.
Read more
Report abuse
See all reviews

Page 1 of 1 Start overPage 1 of 1
This shopping feature will continue to load items when the Enter key is pressed. In order to navigate out of this carousel please use your heading shortcut key to navigate to the next or previous heading.
Back
Next
Pages with related products. See and discover other items: anime collection, anime complete