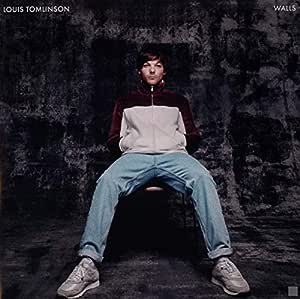 Secure transaction
Your transaction is secure
We work hard to protect your security and privacy. Our payment security system encrypts your information during transmission. We don’t share your credit card details with third-party sellers, and we don’t sell your information to others. Learn more
Details
Ships from
Amazon.com
Sold by
Amazon.com
Walls has been added to your Cart

$17.84
+ Free Shipping
Sold by: TheWorldShop
$13.88
+ $3.98 shipping
Sold by: rockinghorserecords_brisbane
$18.04
& FREE Shipping on eligible orders. Details
Sold by: Fulfillment Express US
Have one to sell?
Sell on Amazon

Louis Tomlinson Format: Audio CD
4.8 out of 5 stars 2,513 ratings
See all 5 formats and editions Hide other formats and editions
Includes FREE MP3 version of this album.&nbspProvided by Amazon Digital Services LLC. Terms and Conditions. Does not apply to gift orders.&nbspComplete your purchase to save the MP3 version to your music library.
Available at a lower price from other sellers that may not offer free Prime shipping.

Written for his fans and inspired by his idols, Walls marks the debut solo album from Louis Tomlinson. Inspired by the records he listened to in his bedroom as a kid and channeling the spirit of the brit pop era of the 90s Louis Tomlinson bares all with this incredibly honest and personal record. Featuring the likes of "Two Of Us," "We Made It," "Kill My Mind" among others the album marks a change of direction for Louis' music, and one he is happy and proud to present to the world.

4.8 out of 5 stars
4.8 out of 5
2,513 global ratings
How are ratings calculated?
To calculate the overall star rating and percentage breakdown by star, we don’t use a simple average. Instead, our system considers things like how recent a review is and if the reviewer bought the item on Amazon. It also analyzes reviews to verify trustworthiness.

Dulene C.
5.0 out of 5 stars Sentimental and heartfelt
Reviewed in the United States on February 2, 2020
Verified Purchase
I was looking forward to Louis Tomlinson's debut solo album because I love the genuine feeling and down-to-earth vibe in his singing voice. There is something about how he sings that takes me way back. I loved almost all the songs on this album, including some of his pre-released songs: Two Of Us, Don't Let It Break Your Heart, Walls, and We Made It. I also love the new songs, but especially Too Young and Perfect Now... their sentiment jives with me. This album is very easy to listen to all the way through. I wanted to add that I agree with another reviewer - the lyrics of almost all the songs also hit me as very meaningful - I can relate to the personal feel of his words.
Read more
20 people found this helpful
Helpful
Report abuse

ponymom
5.0 out of 5 stars Impressed!!!
Reviewed in the United States on February 5, 2020
Verified Purchase
Some of the singles he released earlier were ok, but not impressed. Then I heard the new music on this album on a playlist and had to get it. Yes, there is a direct channel with some Oasis stuff, but is that a bad thing? I don't think so. There is still some remnants of the boyband days, but if you are a Brit pop fan, Oasis, Arctic Monkeys, those lines, give him a try. Won't hurt and the Gallagher brothers haven't mended fences yet.
Read more
13 people found this helpful
Helpful
Report abuse

Amazon Customer
5.0 out of 5 stars BEAUTIFULLY ORGANIC AND VULNERABLE
Reviewed in the United States on February 3, 2020
Verified Purchase
Well worth the wait! This is a breathtaking body of work that’s honest and vulnerable in a way that’s rare to see in other artists these days (admitting “I’m too tired to be tough, just wanna be loved”). Tomlinson brings out his britpop, Oasis-influenced roots with this one, as well as showing off his vocals (powerful belts and heartwrenching falsettos) and beautiful storytelling abilities through his writing. After being mistreated and misunderstood, underrated and underestimated for over a decade, I am so glad he put this album out and proved everybody wrong. He “made it,” and he should be very, very proud. Definitely consider picking this one up. Reviewers say it’ll become a classic you come back to time and time again, like an old friend, so you might want it on your shelf for the long run.
Read more
12 people found this helpful
Helpful
Report abuse

ASHLEY
1.0 out of 5 stars SCAM!! Do not buy!
Reviewed in the United States on December 27, 2020
Verified Purchase
Well bought 2 Louis Tomlinson vinyls for my twin daughters. They opened them for Christmas to find an album labeled “the black keys” in both of them!!!! We thought maybe it’s just a joke cause it was sealed and everything. But we listened and it’s definitely not Louis! We definitely are returning these. Very dissatisfied and very disappointed with the store or Amazon or whomever sold us these frauds. Definitely a scam!
Read more

1.0 out of 5 stars SCAM!! Do not buy!
By ASHLEY on December 27, 2020
Well bought 2 Louis Tomlinson vinyls for my twin daughters. They opened them for Christmas to find an album labeled “the black keys” in both of them!!!! We thought maybe it’s just a joke cause it was sealed and everything. But we listened and it’s definitely not Louis! We definitely are returning these. Very dissatisfied and very disappointed with the store or Amazon or whomever sold us these frauds. Definitely a scam!
Images in this review

S. Levison
1.0 out of 5 stars My record isn’t playable.
Reviewed in the United States on February 10, 2020
Verified Purchase
I was so excited to get this album because I’m a big fan of Louis. My record came warped and is hitting the side of my record player.
Read more
10 people found this helpful
Helpful
Report abuse

KIRSCH
5.0 out of 5 stars Didn't think I'd like it this MUCH
Reviewed in the United States on February 1, 2020
Verified Purchase
All 12 songs are good. Pleasantly surprised. A few I can't stop listening to.
Read more
10 people found this helpful
Helpful
Report abuse

Amazon Customer
5.0 out of 5 stars Loved this album!
Reviewed in the United States on February 8, 2020
Verified Purchase
Loved it, can’t stop listening! His voice is unique and love the British accent! It seems to fit the lyrics so well, which are both uplifting and thought provoking, and the choruses are so catchy. Really enjoyed this album.
Read more
8 people found this helpful
Helpful
Report abuse

Emma
5.0 out of 5 stars Every bit as good as expected, and well worth the wait.
Reviewed in the United Kingdom on February 14, 2020
Verified Purchase
This album has been four years in the making, which is no wonder considering all of the personal setbacks Louis has endured, as well as the need to allow himself to learn who he is as a solo artist. All of the lyrics are beautiful and heart-felt, and cleverly pieced together, some with their double meanings that can easily be interpreted two very different ways, if not more so, which has always been a Louis thing to do. But mostly raw and real and honest, remaining true to himself, where he comes from, where he's been, and where he's heading. He has a beautifully unique voice, which has always made him stand out for me, the attitude he takes to life is unlike most these days, and he's one of those special people with big hearts who make mistakes and own them, rough around the edges, but real and honest and genuine. Listening to the final release wasn't a disappointment, and having heard the live versions in various places and performed in differing ways, I think the live tour is going to be even better. Live is always best.

As much as I love one or two other members of One Direction, I think it's unfair to compare them to one another, as all of them do completely different music and work with different styles. I understand Louis isn't for everyone, but those who he does reach are loyal, long-lasting fans who know when to appreciate what's real rather than what's selling to the masses with the trends - this album has a northern sound to it, something we don't hear too much anymore, and it doesn't pretend to be something that it's not for the sake of following trends and fads. Really pleased with this purchase and will treasure it forever. Few wanted him to succeed, but still he does all the same.

C
5.0 out of 5 stars Amazing
Reviewed in the United Kingdom on February 26, 2020
Verified Purchase
What an amazing debut album. There's a mix of sounds here, from fun Brit Pop (Kill My Mind), to slow and heartfelt ballads (Two of Us, Perfect Now), and more powerful songs like Defenceless and Habit. Louis' voice is wonderful, and there isn't a skip on the album at all. Recommended.
Read more
9 people found this helpful
Report abuse

Alan
2.0 out of 5 stars Walls
Reviewed in the United Kingdom on February 11, 2020
Verified Purchase
I bought this album after seeing the interview on BBC Breakfast. Somewhat disappointed to see that Louis Tomlinson wrote very few songs. No idea why he was whinging after a very good interview on BBC Breakfast, lets face it, he was only there to promote his album and make more money. An average album!
Read more
3 people found this helpful
Report abuse
See all reviews