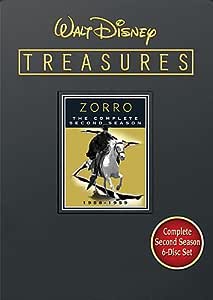 Add to Cart
$269.98
& FREE Shipping on eligible orders. Details
Sold by: galaxyentertainment
Have one to sell?
Sell on Amazon

Guy Williams (Actor), Henry Calvin (Actor) Rated:
NR
Format: DVD
4.8 out of 5 stars 92 ratings
Available at a lower price from other sellers that may not offer free Prime shipping.

With his sword, whip and trusty steed Tornado, Zorro continued to fight the forces of evil in the second season of Walt Disney's legendary classic. The final 39 swashbuckling episodes saw even more children dressing up as the sly fox Zorro in Spanish and making the sign of the Z The second season aired from October 9, 1958, through July 2, 1959, and is presented here -- newly restored and remastered in its original black-and-white format. To add even more thrills to this six-disc set, we've included two rarely seen one-hour specials shown on Walt Disney's anthology series WALT DISNEY PRESENTS -- ZORRO: THE POSTPONED WEDDING and ZORRO: AULD AQUAINTANCE. You'll meet Guy Williams in a profile of the actor who became an overnight star in the role he was born to play. And you'll meet his stunt double, Buddy Van Horn. Featuring exclusive introductions by film historian Leonard Maltin, this is a timeless collection from generations past for generations to come.

Time to catch some more Z's! Just how hot was Zorro as it galloped into its second season? Check out "A Trip to the Archives," one of the bonus features included on this collectible set that's a must-own for every TV-loving boomer. Disney historian Leonard Maltin and Guy Williams Jr. peruse a treasure trove of licensed Zorro merchandise, including the expected (lunchboxes, mask and whip, vinyl wallets) to the unexpected (neckties and roller skates!). And how hot was Guy Williams, so dashing as the masked avenger Zorro? The same kids who donned coonskin caps to play Davy Crockett were carving Z's into their school desks. Annette Funicello, America's teen sweetheart, had a crush on him, prompting Walt Disney to cast her in one of season 2's story arcs as a present for her 16th birthday. Funicello stars as a pueblo visitor searching for her father, whom no one seems to know, but someone is trying to scare her out of town. In addition to being rescued by Zorro, she gets to sing a song, "The Lonely Guitar." Several character actors beloved by vintage-TV buffs appear this season, including Lee Van Cleef, Tige Andrews (Captain Greer on The Mod Squad), Robert Vaughn, Richard Deacon, and Ricardo Montalban. Season 2 tinkers a bit with the series' successful formula. Beginning with the episode "The Gay Caballero," a new opening composed of scenes for that week's episode replaced the rousing theme song that helped put Zorro on the map. There were more, and shorter, story arcs. Zorro was even, briefly, given a love interest (Jolene Brand as Anna Maria Verdugo). But the accent remains on adventure with spectacularly staged fights (another bonus feature is an interview with Guy Williams's stuntman, Buddy Van Horn) and daring rescues. This set contains two Zorro rarities, near-hour-long adventures that were originally broadcast in 1961 on Walt Disney Presents and have never been available on home video: "The Postponed Wedding," featuring Funicello, and "Auld Acquaintance," costarring Montalban and Ross Martin (The Wild Wild West). Zorro has aged well thanks to its historical setting in 1820s California. There is nothing like it on television, and now all those former Zorro-wannabes can introduce their own children (and grandchildren) to the timeless pleasures of Zorro, which delivers on its promise of "never-to-be-forgotten thrills." --Donald Liebenson