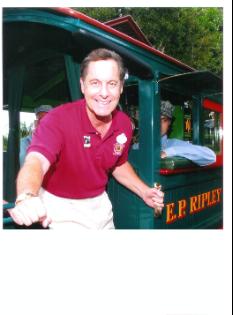 by Michael Broggie (Author)
4.9 out of 5 stars 45 ratings
See all formats and editions
Sorry, there was a problem loading this page. Try again.

Hundreds of color and b&w photographs, many of them from private collections and previously unpublished, illustrate how one man's love of railroading shaped our expectations of family entertainment today. The author weaves interview with Mrs. Walt Disney, animators Ward Kimball and Ollie Johnston, and a host of other Disney employees and acquaintances into a narrative of how Disney's history with trains evolved from his early life into the Magic Kingdoms and their authentic steam-powered trains. Annotation c. by Book News, Inc., Portland, Or.
Read more
Previous page
Next page

Michael Broggie is an author and historian. He is an authority on the life and legacy of Walt Disney and the global empire he inspired. As a public speaker, he has toured throughout the country lecturing at universities, libraries, organizations and railroad conventions on his first-person experiences with Walt Disney and many of the Disney legends, including his father, the late Roger Broggie, who was selected personally by Walt Disney to be his first Imagineer--the designers and engineers who built Disneyland and other resorts throughout the world.

Michael's first Disney assignment was as a 12-year-old test driver of the Autopia prototypes on the back lot of Disney Studios in Burbank, California.

After graduating from high school, he spent summers at Disneyland working his way through college. After completing his undergraduate education, he joined Walt Disney Studios as a publicity writer in the motion picture marketing department.

His career led to management and consulting positions with Marriott, Boise Cascade, Lake Arrowhead Resort and General Motors. He served on the ABC Television Network sponsorship team for the 1984 Summer Olympic Games in Los Angeles.

He is chairman of the board of governors of The Carolwood Society, which he co-founded with his wife Sharon. He's chairman emeritus of the Carolwood Foundation, the operator of Walt Disney's Carolwood Barn Museum in Griffith Park, on behalf of the Disney family.

His published books include "Walt Disney's Railroad Story," which earned the Benjamin Franklin Gold Medal for Best Biography. His other books include a biographical profile of Warren Buffet's longtime business partner Charlie Munger, which is contained in "Poor Charlie's Almanack" edited by Peter Kaufman; and, "Walt Disney's Words of Wisdom," an inspirational booklet based upon the teachings Michael learned directly from Walt Disney. Other works include "The History of Disney Merchandise" and a child's illustrated biography, "Walt Disney's Happy Place." His book, "Air Force One--The Final Mission" is about the last Presidential Boeing 707, which is displayed at the Ronald Reagan Presidential Library. He also wrote the official souvenir book for the Reagan Library. He wrote "Irwindale: Garden of Rocks" for the city that supplied a billion tons of rocks and gravel to build Southern California. He's written and edited hundreds of articles for national publications and is currently doing research for an autobiographical book.

A native of Los Angeles, Michael earned his MBA and a Doctorate in Marketing at Pacific University, San Diego; a BA in Communications at California State University, Northridge; and, an AA in Journalism from Los Angeles Valley College.

He is a veteran of the United States Air Force. He attended law school at Lincoln University. Michael and Sharon Broggie reside in Prescott Lakes, Arizona, where they are active in civic and charitable endeavors including volunteering on Prescott Police Department's Citizens On Patrol unit. He is a founder of the Prescott Police Foundation, a member of the Central Arizona Model Railroad Club and the Westlake Yacht Club.

Barcelos
5.0 out of 5 stars Excellent condition that I cannot put down.
Reviewed in the United States 🇺🇸 on August 9, 2021
Verified Purchase
My new favorite book -- "Walt Disney's Railroad Story" has been lovingly preserved over the years. It appears that it was even enjoyed by a variety of readers in the Centerville, Indiana Library. In spite of all the readers that have enjoyed this book, it has been kept in pristine condition. I feel so fortunate to have received this comprehensive book that tells the story about how Walt Disney's passion for scale-model live steamers led to the inspiration for Disneyland. The book is in excellent condition. It is a real treasure.
Read more
One person found this helpful
Helpful
Report abuse

Matterhorn Magic
5.0 out of 5 stars A great book, worth the money if you love railroads
Reviewed in the United States 🇺🇸 on January 15, 2009
Verified Purchase
A friend of mine loaned me the book. I then decided to order one from Amazon.com through one of the private sellers for a great price.

When I read how the locomotives were obtained for the Walt Disney World Railroad, I remember a conversation I had back in 1994 with one of Disney World's Magic Kingdom cast members who operated the WDRR. I noticed that the locomotive was a 4-4-0.

A cast member there told me all four of the locomotives were found in Mexico, which confirmed what Michael Broggie wrote.

The book just totally fascinates me about Walt Disney's love of trains. As I will subscribe to a computer model railroad simulation program, I sure like to run a layout similar to Walt Disney's Carolwood Pacific's.

Railroads were Walt Disney's dream long before my pal Mickey came around. I visit Disneyland later this month. Thanks be to God for the grace and soul of Walt Disney. He left a legacy for all of us to savor and enjoy.

West Coast Girl
4.0 out of 5 stars One of my Top Five Disney books!
Reviewed in the United States 🇺🇸 on December 1, 2014
Verified Purchase
Great book that is hard to find. I grew up riding the Disneyland Railroad and fell in love with trains at a young age. This book focuses upon Walt's journey in his growing interest in trains. This is a large coffee table book printed using quality paper and a plethora of photographs I have not seen elsewhere. Written in chronological order, the author includes extras to add interest such as tangent topics indicated with a little cartoon of a Mickey glove pulling a railroad switch. For the novice train enthusiast, the glossary of railroad terms is invaluable; also includes four appendices, a bibliography, further information and an index. At over 400 enormous pages, it contains enough detail for nearly any Disney fan.
Read more
2 people found this helpful
Helpful
Report abuse

winadk
5.0 out of 5 stars Walt Disney's Railroad Story, a great look inside his passion for railroads small and large.
Reviewed in the United States 🇺🇸 on February 27, 2015
Verified Purchase
This is a great research book on an entertainment genius and the loves of his life (TRAINS!!) I had an opportunity to meet the author about a week after I received my book, and saw his presentation about the writing of this book. He (Michael Broggie) was very close to the Disney Family during the fifties and sixties, and he was in the right place to produce this work. I recommend it to anyone wishing to know more about the private Walt Disney, his passion for railroads, and some of his closest associates (like Ward Kimball , whom I had the opportunity to meet in person in 1986). Lots of pictures.
Read more
One person found this helpful
Helpful
Report abuse

Elaria Hall
5.0 out of 5 stars Lots of wonderful photos
Reviewed in the United States 🇺🇸 on February 17, 2020
Verified Purchase
This is a beautiful detailed book with lots of photos. You learn how the family back yard train became the inspiration for Walt to built Disneyland.
Read more
One person found this helpful
Helpful
Report abuse

James B. Lineberry
5.0 out of 5 stars Walt Disney's Railroad Story
Reviewed in the United States 🇺🇸 on May 13, 2010
Verified Purchase
This railroad book about Walt Disney arrived in good order. Back in the mid 1990's, I had seen this book at the bookstore in Disney Village, in Florida. Since it was a heavy book, I decided to drop by later in the week and pick it up. Opps, sold out. So, several years later, I chanced upon this title on Amazon. This is an excellent book on Walt's fascination with trains and how it inspired him to start his great parks in California and Florida. The books has some great pictures of these mini-scale trains. I'm thankful that Amazon provided this book and great service in shipping and handling. Thanks. B.L.
Read more
One person found this helpful
Helpful
Report abuse

RonL
5.0 out of 5 stars It did NOT start with a mouse, it started with a TRAIN!
Reviewed in the United States 🇺🇸 on July 1, 2010
Verified Purchase
From an early age, Walt Disney was smitten with trains - he worked on one as a newsboy when he was in his teens. Fast forward and Walt (no one who worked for him called him Mr. Disney) got hooked on live steam model trains and had one on his property on Carolwood Ave large enough to ride - which is now in the Walt Disney Family Museum in San Francisco. This is the story behind the train fanatic named Walt Disney.
Read more
One person found this helpful
Helpful
Report abuse
See all reviews

Alan
5.0 out of 5 stars Fantasmic!
Reviewed in the United Kingdom 🇬🇧 on June 5, 2016
Verified Purchase
A fabulous book for anyone interested in Walt Disney and railroading. Wanted a copy for a long time, and can't believe this is not a new copy. Brilliant price: can't imagine the copies available at twice the price or more can be any better than this one. Thanks for finding it and making it available. You cannot beat a proper book!
Read more
One person found this helpful
Report abuse