You've subscribed to Wicked! We will preorder your items within 24 hours of when they become available. When new books are released, we'll charge your default payment method for the lowest price available during the pre-order period.
Update your device or payment method, cancel individual pre-orders or your subscription at
Your Memberships & Subscriptions
There was an error. We were unable to process your subscription due to an error. Please refresh and try again. 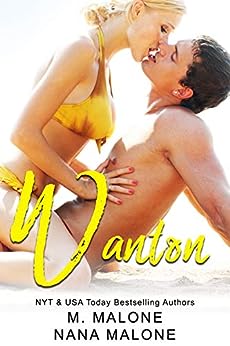 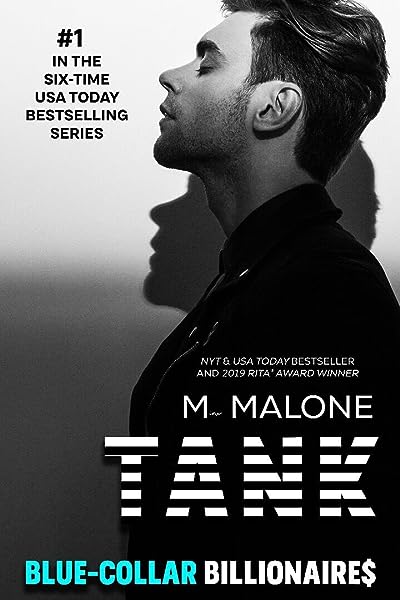 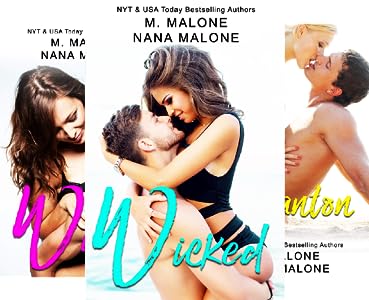 "Wanton was a quick flirty sexy read. It had the banter that I love to read paired with the whole forbidden fruit aspect and I was hooked." - A Book Nerd Bookseller & Bibliophile Blog

"Wanton was sexy, steamy and angst-filled read and I loved it!" - Goodreads Reviewer
"Fun to read and a quick get away that I am so glad that I didn't miss!" - Stephanie's Book Reports

"I really enjoyed this quick, steamy and angsty read. I am a huge fan of these authors, especially when they co-write. Wanton was a great story with characters I liked very much!" - Reviews From the Heart

"M. Malone and Nana Malone have done it again!" - Up All Night With Books

"You won't be disappointed. Another great read by this talented duo. 5/5 stars" - Sweet & Spicy Reads

"Malone squared did a fabulous job bringing the sexy... I was glued to my page from the start." - Becky, Amazon Top 1000 Reviewer

4.3 out of 5 stars
4.3 out of 5
77 global ratings
How are ratings calculated?
To calculate the overall star rating and percentage breakdown by star, we don’t use a simple average. Instead, our system considers things like how recent a review is and if the reviewer bought the item on Amazon. It also analyzes reviews to verify trustworthiness.

Lisa
4.0 out of 5 stars Wanton
Reviewed in the United States on October 4, 2018
Verified Purchase
Trevor and Natalie, what a real cute couple. This was a good series...the feel good type....the type that makes you smile because they were so damn cute. College students Trevor’s professor ask him to let her niece rent a room, she was moving to Boston to finish college after a bad breakup. I think you can figure out the rest. Good story.
Read more
One person found this helpful
Helpful
Report abuse

Beckyrae99 (Becky Wise)
TOP 1000 REVIEWER
4.0 out of 5 stars One sexy read
Reviewed in the United States on August 28, 2018
Verified Purchase
Wanton is one sexy read. I love Natalie and Trevor together. We finally have Trevors book. You met him just a little in Wild so if you read that one then you know who he is. He may be a little bossy but he is hot. Natalie is sweet and sexy. They both need a change from break ups and when thrown together you can feel the sparks fly. I love how much they both fight the attraction and bam the explosion. Malone squared did a fabulous job bringing the sexy and this little number. I was glued to my page from the start.
Read more
Helpful
Report abuse

Mrshnymffn
5.0 out of 5 stars Finding true love
Reviewed in the United States on May 19, 2019
Verified Purchase
M. Malone continues to write stories that we can get behind. Falling in lust then love with your new roommate can be so intising that you do dumb things. But love has a way to come through and right any wrong. Job done well.⚘⚘⚘
Read more
Helpful
Report abuse

Zoe
4.0 out of 5 stars must read
Reviewed in the United States on October 7, 2018
Verified Purchase
The ladies are back at it. keep it coming ladies you are doing a great job with the work you have produced and it brings life to me as a reader with every new read.
Read more
Helpful
Report abuse

Momof2
4.0 out of 5 stars Fun quick read
Reviewed in the United States on September 5, 2018
Verified Purchase
Trevor was so much fun to get to know and watch him really find out what love was. Natalie is a perfect match for him. Watching these two dance around their attraction for one another and then figure out the growing feelings they had was so enjoyable.
Read more
Helpful
Report abuse

Kathy Rouchelle for Cajun Heat Book Blog
5.0 out of 5 stars Quick attention grabbing read!
Reviewed in the United States on August 28, 2018
Trevor and Natalie start off with the rockiest of beginnings. She's beautiful, in that sexy librarian sort of way that has Trevor all tied up in knots as he has to keep his hands and everything off of his professor's niece, who now just happens to be his new roommate. When Natalie lays eyes on Trevor, her eyes almost come out of her head, as he stands in the door, shirtless and sporting more abs than she thought possible. He doesn't like her, he doesn't want to like her, he can't like her. But his mind does some wandering and the fantasies that his brain spins have him hitting the shower more than he has ever done before.

Takes a little time but as soon as he realizes that they have so much more in common than he expected, and they both realize the attraction they have for one another, things take a turn and their coolness toward each other heats up with an intensity hot enough to burn the building down. His dilemma now, his plans for the future. He's been working with his professor on his career after graduation, heading to working internationally. Now that there is Natalie, he isn't sure what he will do, all he does know is that he doesn't want to let her go.

Wonderful read that will give you a few chuckles, make you shake your head and sigh all within the pages of the story. The characters are well written and well defined and with the exception of a few hiccups in their budding relationships, I found that they handled the situation more maturely rather quickly. The only thing that had me shaking my head a bit was...what about him finding out about his sister and his best friend???? I was waiting for an explosion or maybe a sign of relief, or maybe both when he found out. Alas, guess I'll have to wait a little bit for that.

Good quick read that will hold your attention and have you turning pages quickly to see what happens next.
Read more
One person found this helpful
Helpful
Report abuse

meganissima
3.0 out of 5 stars Steam for days, not a ton of the tender side, but enough to work alright.
Reviewed in the United States on August 28, 2018
Sexual tension from the word go, these two deserved the intelligent support as well as the passion they could only get from one another. With attraction disguised as animosity and seemingly diverging career paths, Trevor and Natalie have an uphill battle on their hands to breaking down their walls and finding lasting happiness together. Of course you can't forget their intense chemistry. With passion in spades, it's hard for them to ignore their unexpected magnetism and it doesn't take long before they both succumb. But will that be enough to sustain them for the long haul?

The synopsis made me feel like this was supposed to be an enemies-to-lovers situation but really it was just two incredibly stubborn people who are enormously attracted to one another. Their attraction catches them off guard and since neither one of them are in a good place to build a relationship when they meet, they do everything in their power to avoid, deny, and quash anything more than the awkward, tense interactions they create. I didn't feel like there was a good enough transition from their disappointing interplay to a couple who could handle all the changes and situations a romantic relationship would put them through. It was either not long enough or was too focused on their antagonism to make me believe that what they had could bridge the distance they may endure as their careers and education advance alongside their relationship. Despite that, they had potential and incredible amounts of chemistry.
Read more
Helpful
Report abuse
See all reviews

Cookie Munchkin
4.0 out of 5 stars Sort, Sweet and Steamy.
Reviewed in the United Kingdom on August 31, 2018
Verified Purchase
This is the third book in the Wicked series and each one has been packed full of funny moments, hot as hell chemistry and enough heat to melt a kindle.

Trevor comes home to a letter from his girlfriend Courtney telling him she’s leaving him, he’s shocked and upset but seems to move on very quickly and starts looking for a new roommate straight away. He is approached by his Professor and mentor as her niece is moving to the area to complete her degree and of course he agrees. There is only one problem Natalie Washington is just about the sexiest woman he has ever seen and he knows he shouldn’t want her but can he stay away.

Trevor Hamilton is nothing like Natalie was expecting, from the minute he opens the door without a shirt she’s hooked. Meeting Trevor was the last thing that she wanted or expected after her recent break up with her cheating ex Brian, she always came last in his priorities. But the chemistry is too hard to ignore and Natalie doesn’t want to. She is falling fast and hard, she can only hope that he doesn’t break her heart as she might not survive it a second time.

Fast read with endearing characters that you just want to be happy together and work it all out. Their witty banter and steamy scenes are the icing on the cake.
Read more
Report abuse

NK
5.0 out of 5 stars Just hot.
Reviewed in the United Kingdom on September 9, 2018
Verified Purchase
Absolutely fabulous read. It was hot wild and wicked. What more can you ask fun the Malone's.

Talia's and Trevor's story was fantastic. Both overcoming from toxic relations. How they gel together through the banter and steamy scenes.

Thank you once again for a fantastic read.
Read more
Report abuse

Kim field
5.0 out of 5 stars Hot Series
Reviewed in Australia on November 1, 2018
Verified Purchase
Loved this series enjoyed the characters all of chemistry between the characters
Read more
Report abuse
See all reviews