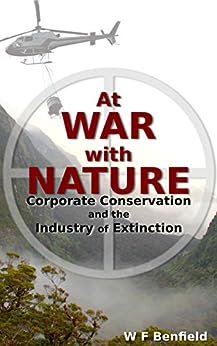 Bill Henderson
5.0 out of 5 stars Eco-Industrial Complex revealed
Reviewed in the United States on February 20, 2015
Verified Purchase
New Zealand has freedom of speech but there are things we do not talk about. In `At War with Nature' W F Benfield deconstructs what is perhaps New Zealand's greatest collective insanity; the industrial scale poisoning of biota in the name of conservation. Read how Gondwana's native flora evolved to be browsed, and how the removal of browsers - first the Moa and later their introduced surrogates, leads to the death of the podocarp forest. How the patent fiction that Moa did not browse this forest was foisted upon a supine scientific community by a former school teacher flourishing an unearned honorary degree from a German university.
How a `not for profit' Government poison factory supplies munitions for the War. How the imperative to move product leads to chronic overdosing, unremarked in New Zealand but noted as carelessness in extermination export markets such as the US, where NZ government agencies presided over the by-kill of a large number of bald eagles.
These eradication programs are supported by the best science money can buy. The actual science finds that possums do little damage to native forest and may help native birds. The actual scientists who reported this went on to discover they were out of a job. The others are aware of the results they are expected to provide. Such as how 1080, an insecticide, has no effect on native insects and how 1080 residue in a declining weta population will conserve the kiwi, an insectivore.
Possums are now so scarce their fur is up to six times the price of merino fleece. Useful people with trap lines easily control numbers and produce a surplus sufficient to pay tax, but that is not the way New Zealand likes to do business. Possums only began to be persecuted in 1947 after they were accused of damaging the growing tips of young commercial pine trees. The organization bringing the charges was the New Zealand Forest Service, a commercial forest owner and precursor of DoC.
Total pest eradication (a pest is anything not native except us) has been trialled on islands, the agencies involved typically reporting unalloyed success. Mr Benfield, like other members of the public, is not permitted onto such islands but, from what can be gleaned, infers partial to total failure. Typically the pests survive but the natives - that have in some instances co-existed with the pests for a century - do not. This notwithstanding, enthusiasts are planning a total eradication program for both main islands of New Zealand. Guaranteed to fail, implementation will require the methods of a police state. (The penalty for harbouring mice: three months in a 1080 penal battalion?) It is probably too far down the track to prevent but after reading Bill Benfield's book at least you will know how you came to be in the predicament.
After the Urban Liberals, in whose name this is done, have migrated to whatever cause replaces Green and the war is over, W F Benfeild details a shattered biosphere ministered to by an eco-industrial complex permanently hooked on a tax funded rental.
A must read.
Read more
7 people found this helpful
Helpful
Report abuse

Lindaxone
5.0 out of 5 stars Exposing the greed behind New Zealands greatest shame.
Reviewed in the United States on March 16, 2018
Verified Purchase
This book probes into what is behind New Zealands insane so called conservation efforts to save our Native flora and fauna by poisoning it out of existance. WF Benfield exposes the gravy train that the poisoners are profiteering from and the unscience they are using to justify their cause. The biggest message from this book is to let nature be nature. She has done a far better job of it than we ever will. Our bird species have been in decline since the so called conservation department began aerially poisoning them with one of the worlds most deadly and cruel toxins compound 1080. Wake up New Zealand. Visit the areas where 1080 has not been used and see for yourselves where kea, kiwi, and other native birds are thriving in healthy non toxic eco systems, alongside the so called pests and preditors. It is human greed and stupidity that causes species extinctions. Nature is balance, it does not destroy itself.
Read more
Helpful
Report abuse

Glory Keverne
5.0 out of 5 stars LOOTING OUR PLANET.
Reviewed in the United States on June 4, 2015
Verified Purchase
The stunning cover says it all: a beautiful country aerially threatened by human evil. This book is an excellently written and researched piece of environmental detective work. B W Benfield unravels propaganda for New Zealand's nature-poisoning operations exposing exactly how corporate conservation has fooled the public into paying to destroy its own precious environment. This nature poisoning, supported by invasion biology (an anti-life pseudo-science) and justified by nonsensical studies, is increasingly practised by chemical corporations in today's world. To add insult to injury, animal species or the very climate-change the poisoning itself evokes, are then blamed for the damage caused. Worse still this ruthless means of eliminating species is now being exported to Earth's uninhabited island and these, once bastions for unspoiled nature, are now increasingly being polluted for profit. What is happening is the looting of our ailing planet with no regard for the damage it is doing to the earth, to different species, and the excruciating torment it is mercilessly causing individual animals. (Watch POISONING PARADISE on YOU TUBE to grasp the extent of this depravity.) How can this atrocity be tolerated? It's only a matter of time before humans are directly affected through drinking poisoned water. Since the entire planet is devastated by the global warming it exacerbates, what is happening not only threatens New Zealand, but the world. Thank you Mr Benfield for so clearly revealing some of the forces bent upon destroying our only home in the universe. I advise anyone with any doubts to read this enlightening book and find out exactly why the phrase 'extinction industry' so aptly describes corporate conservation in New Zealand and the world.
Read more
One person found this helpful
Helpful
Report abuse