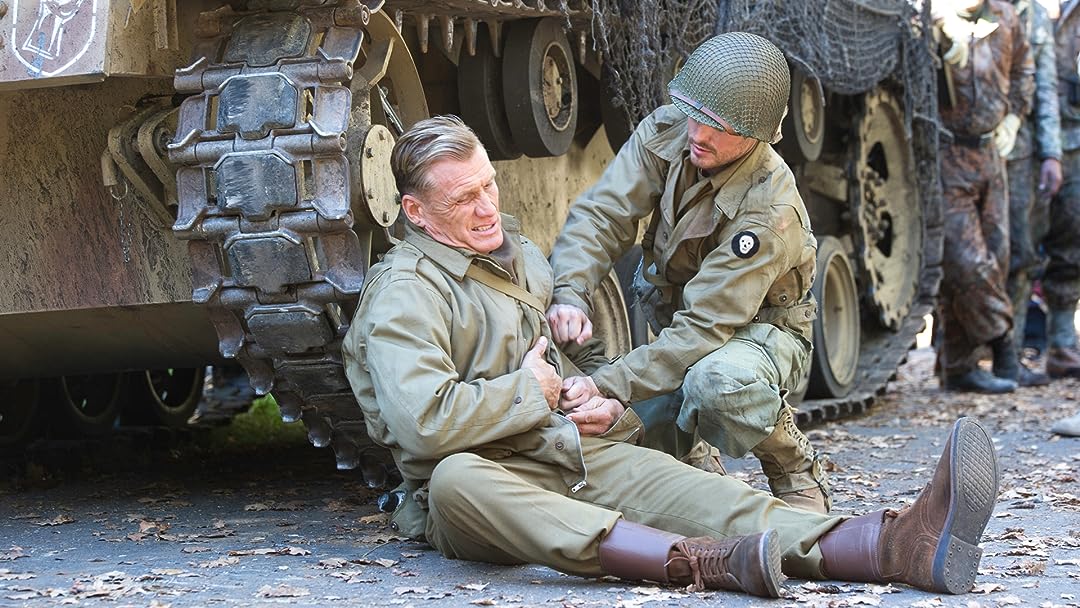 (316)
4.21 h 27 min2015X-RayR
A rag tag unit of misfits known as the War Pigs must go behind enemy lines to exterminate Nazis by any means necessary.

Joseph A. ArdineReviewed in the United States on April 27, 2020
4.0 out of 5 stars
A Great Saturday Matinee Movie
Verified purchase
*NOTE* This review will have spoilers. I also check IMDB periodically, ever since my some of my reviews were victims of plagiarism.

I am not sure why this film got so much hatred. Obviously, it didn't have the budget of films like "Dunkirk", "Hacksaw Ridge", and others like that, but sometimes it is nice to take a break from the big budget epics and dramas.

The acting in "War Pigs" was average really. Noah Segan and Luke Goss gave pretty good performances. Lundgren, well I'll give him credit for trying an accent, but it was pretty bad. I think Chuck Liddell, as he continues to take on more and more acting roles, keeps improving. Mickey Rourke pretty much did his "Rourke Routine", which isn't bad per se but it didn't fit well here. I liked Jake Stormoen and wish he had more screen time because he has some acting chops, which he got to show off more in the Mythica films.

The story is one we've all seen before - a ragtag band of soldiers have to shape up and tackle an assignment that will make or break them. Me personally, as long as it is entertaining, I don't mind seeing a story like this reused. Heck, why else would I watch "The Dirty Dozen" over and over again!? To a degree, I understand people who get bored of "tired, reused plots" but I'm always of the mind set that certain cliches, tropes, stereotypes and reused plots are like comfortable, broken-in, shoes.

It has a solid pace, another point people complained about that I didn't understand. I think it moved along quite well - with a small backstory, training and bonding montages, a bit of drama, and then a nice little action packed conclusion.

The combat scenes were pretty good. I think the hand to hand fighting was where the action scenes shined. Another point of disagreement I have with other reviews - the CGI. I think it was passable. The effects of fire, explosions, bullets ricocheting, blood/gore, and muzzle flashes were minimal so yes, you can notice them, but I don't think they were as egregious as some other film's poor use of CGI for the same effects.

I loved watching movies like this on Saturday afternoons and I hope I find more of this caliber. This was time well spent and I enjoyed it. So in this viewer's opinion, it's a good movie. 3.5 out of 5.

not a bot, not a FANBOY, I can think!Reviewed in the United States on February 21, 2021
4.0 out of 5 stars
The movie gets a 4 star but...
Verified purchase
now the ugly part - no Army Major ever wore a cowboy hat in WW II - awards are not worn into combat much less rank, on secret missions behind enemy lines - They would have been shot any way for being there, so German uniforms wouldn't have worsened their situation. Then, dead Germans on an open road, near a secret base, just not too bright!! and finally, when yer trying to be sneaky... you don't talk load even if you did just kick 4 German a$$es in the basement!! Now for my favorite part - Excuse you Mr. Rourke, are ever gonna play your part of an authentic person BESIDES YOURSELF?- or is the toothpick, yer feet up on the table attitude all you know how to do - can't think of any military person I know, from my 11 year, military career thad appreciate the multiple insults that you bring, to the Major Redding character. BTW any private could have told any number of things this movie could have improved, which looks to me.... they didn't even bother to hire!!
3 people found this helpful

SockmanReviewed in the United States on May 11, 2022
4.0 out of 5 stars
Quick delivery.
Verified purchase
Item as described.

JeffJReviewed in the United States on June 27, 2020
3.0 out of 5 stars
Watchable B movie, and almost memorable
Verified purchase
What do the following have in common
500 cigarettes
North California forests
Cruddy French accent
Cameos by Mickey Rourke

That's correct, the War Pigs movie. The first 40 minutes are spent bonding and training, really kinda boring. The rest of the movie was okay. Both Dolph and Luke do decent, with their supporting War Pigs cast.

The whole movie is a bit unbelievable, but I've seen worse. Give it a try to pass the time on a Friday night.
2 people found this helpful

rockeggrollReviewed in the United States on February 13, 2021
4.0 out of 5 stars
Good B war movie.
Verified purchase
If you're tired of CGI stylized shoot out gun battle scenes with impossible CGI physical stunt maneuvers and would just like to watch a sort of plain old 60s / 70s style kind of B war movie then this is for you. The only detail that drove me nuts was Mickey O'Rourke's sloppy long stringy hair. Just get a military cut like everybody else in the movie Mickey.

AndrewReviewed in the United States on April 27, 2020
3.0 out of 5 stars
Not as bad as I thought
Verified purchase
After reading some of the reviews, I expected this to be terrible. It is not terrible. Maybe set your bar a little lower? This is not Saving Private Ryan or We Were Soldiers, but it's OK. If you're looking for a realistic WWII-era movie, this is not for you. If you're looking for something to kill the time while you're waiting on quarantine, you've found a way to burn 1.5 hours.

DwightReviewed in the United States on May 16, 2022
1.0 out of 5 stars
So many ignorance in one movie
Verified purchase
I tried to overlook a lot of crap in the beginning, but when the captain was promoted to a 2LT, I knew the director including the actors never put on a uniform before. Everyone knows officer ranks in the Army start at 1LT, 2LT, the captain. They should all be embarrassed to be a part of the cast. They didn't even have the decency to do the basic research. I could not go past that scene in the beginning.

tekmonReviewed in the United States on September 20, 2015
3.0 out of 5 stars
OK story, bad military research for Dolph character.
Verified purchase
Not bad, decent story. Would have given it a four but the research on French Foreign Legion is flawed, only foreign nationals are permitted into the legion. Dolph would have been more real as a Swede with a Swedish accent (really bad french accent he had), and a Swedish backstory. Also the rank was wrong, if he is going to wear a Foreign Legion uniform, he should have had a legion rank.
8 people found this helpful
See all reviews
Back to top
Get to Know Us
Make Money with Us
Amazon Payment Products
Let Us Help You
EnglishChoose a language for shopping. United StatesChoose a country/region for shopping.
© 1996-2022, Amazon.com, Inc. or its affiliates