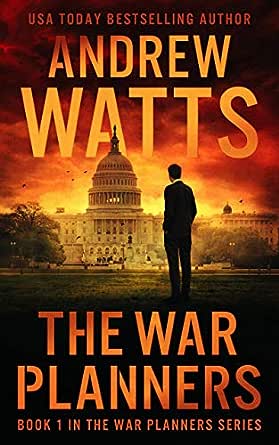 You've subscribed to The War Planners! We will preorder your items within 24 hours of when they become available. When new books are released, we'll charge your default payment method for the lowest price available during the pre-order period.
Update your device or payment method, cancel individual pre-orders or your subscription at
Your Memberships & Subscriptions
There was an error. We were unable to process your subscription due to an error. Please refresh and try again. 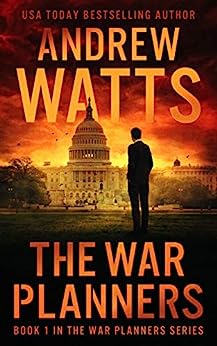 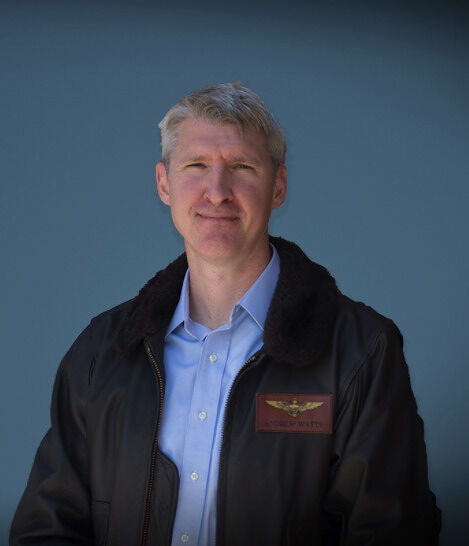 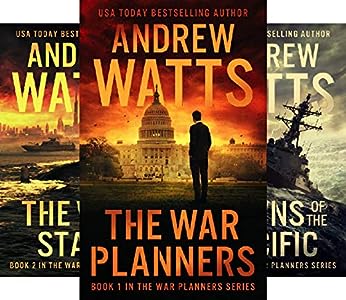 "As a fan of Flynn, Thor and Child I am impressed. Great read." - Amazon Reviewer


"From the first page of this book to the last one, I was sitting on the edge of my seat." -Amazon Top 500 Reviewer

I spent 10 years as a Navy helicopter pilot, and began my first novel while deployed on an aircraft carrier. I hope you find my books enjoyable.
Find out about me and my books at andrewwattsauthor.com

"Fast paced, good read. Author's military experience shows and gives credence to the story." - Amazon review
"Difficult to put down. Terrific action. Believable. Frightening to imagine something like this could possibly happen. Andrew Watts has a new follower; Can't wait for his next book. Highly recommended reading." -Amazon review

"The author created the tension, conflict, plot and cliffhanger action needed to keep the reader engaged. This is my pseudo-name - but as a writer who has had bestsellers on the national lists, I am happy to offer a 5 star review...I definitely will purchase the series." - Amazon Review

Andrew Watts graduated from the US Naval Academy in 2003 and served as a naval officer and helicopter pilot until 2013. During that time, he flew counter-narcotic missions in the Eastern Pacific and counter-piracy missions off the Horn of Africa. He was a flight instructor in Pensacola, FL, and helped to run ship and flight operations while embarked on a nuclear aircraft carrier deployed in the Middle East.

Today, he lives with his family in Ohio.

3.9 out of 5 stars
3.9 out of 5
1,085 global ratings
How are ratings calculated?
To calculate the overall star rating and percentage breakdown by star, we don’t use a simple average. Instead, our system considers things like how recent a review is and if the reviewer bought the item on Amazon. It also analyzes reviews to verify trustworthiness.

Ted
5.0 out of 5 stars Great reading for the war buff
Reviewed in the United States on September 30, 2018
Verified Purchase
Got this free on my Kindle using Amazon Prime free read. Great story considering how the story is close to real world events. Actually had a hard time putting it down so I could get some sleep each night. After finishing book one I purchased the remaining books in the series and each one of the books had real world problems in it. When our President and North Korea's leader were butting heads I could see it in the story line of one of the books.( not to ruin it for future readers)
Read more
115 people found this helpful
Helpful
Report abuse

Roger J. BuffingtonTop Contributor: Fantasy Books
VINE VOICE
4.0 out of 5 stars Disturbing political-military novel
Reviewed in the United States on June 19, 2017
Verified Purchase
This is an interesting and downright creepy novel concerning a conspiracy by Chinese elements to actually invade the United States. No spoilers here, but I saw what was going on pretty much immediately, but that did not make it any less disturbing.
The characters in this story are not well developed and at times I had trouble keeping track of them. On the plus side, this first installment of the "War Planners" trilogy held my interest and kept me turning the pages. RJB.
Read more
115 people found this helpful
Helpful
Report abuse

gstam
5.0 out of 5 stars Interesting plot about an attach on the US
Reviewed in the United States on February 16, 2018
Verified Purchase
First book in an interesting trilogy. The plot sets up a very crafty scenario for a possible attack from China. Not sure why they would ever attack their best customer however the story plays out very well. There are twists even though somewhat expected. Watts writes so well that I don't mind. As I said this book is the first of three. Watts leaves you hanging at the end and anxious to begin the second book so you might as well buy all three together if you can get a discounted price.
Read more
92 people found this helpful
Helpful
Report abuse

Kindle Customer
5.0 out of 5 stars Excellent!!
Reviewed in the United States on May 10, 2018
Verified Purchase
What a frightening and feasible scenario. The way the web was spun, one strand at a time, as the participants didn't realize what they had walked into.
Great story, the characters in many instances rising above and beyond what they thought themselves capable of.
Really love this authors books.
Read more
80 people found this helpful
Helpful
Report abuse

Jeff Benham
5.0 out of 5 stars Just a little war.
Reviewed in the United States on July 8, 2016
Verified Purchase
Let's just suppose that China wanted to start a war with the United States. How would they go about it to have its greatest effect and not do too much damage to the infrastructure? Further suppose that the CIA gets wind of this and wants to figure out how China plans to do this so they can stop it. They just might get together some of the best minds in their field of expertise to analyze the probabilities. What the experts don't know, and what the reader theorizes soon enough, is that it is not the CIA and they do not want a plan to stop a war. They want a plan to implement a war. Good action and worth the read, but the conclusion awaits in the next book (I hope).
Read more
155 people found this helpful
Helpful
Report abuse

Firebrandrand
4.0 out of 5 stars Frighteningly Real
Reviewed in the United States on January 7, 2016
Verified Purchase
Really well written with lots of surprises and truly unexpected twists. Must have done a ton of research to have fleshed out such a frightening yet perfectly feasible premise. Way too close to current events not to give readers nightmares. The ONLY reason I didn't give it 5 stars is because I hated the ending. Don't want to be a spoiler and say why I didnt like it but it wasn't due to the author's lack of talent or creativity. Purely subjective opinion. I'm just a Pollyanna and I don't like books or even Academy Award winning movies that end that way. Looking forward to future endeavors by this author. I love books where I come away feeling educated besides just being entertained and he certainly got 5 stars for that.
Read more
156 people found this helpful
Helpful
Report abuse

P. Mykytyn
5.0 out of 5 stars Good Plot
Reviewed in the United States on October 4, 2017
Verified Purchase
Exciting pllot that can make one wonder today. I was not really tuned in to the fact that this book was the first of three dealing with the plot/story. It pretty much became obvious to me as War Planner ended very abruptly with no resolution. That led me to the next in the series, which I finished in a day or so, mostly on a couple of airplane trips. I am now into the third book. I look forward to other books by Watts.
Read more
86 people found this helpful
Helpful
Report abuse

TX Golfer
4.0 out of 5 stars Secrecy?
Reviewed in the United States on January 9, 2016
Verified Purchase
After rapidly plowing through a free version of the initial episode, I quickly downloaded the paid version of the complete book - and I was glad that I did.

In today's world of top-secret, behind the scenes activity, planning must take into consideration otherwise unthinkable scenarios.

The story is propelled forward quickly by well-developed characters against a very realistic backdrop.

The premise really made me pause to think about what I "think" that I really know, whether or not my assumptions need to be re-examined, and how to be a broader planer.

Matt J
4.0 out of 5 stars Gripping Read
Reviewed in the United Kingdom on August 21, 2016
Verified Purchase
A very good concept and one that made me stop and think just how plausible the story is, almost frighteningly so. It takes a bit to get into the book as you're trying to work out who is who and whether or not they can be trusted, but then it suddenly starts getting very tense as you understand the bigger picture. The main character is very believable but I would have preferred him to be a touch more gung-ho, but then it wouldn't be the same story. I particularly liked the detail in the book about how they were going to plan the war; it seemed far too realistic and probable and certainly made me think about just how much our lives could be affected by a controlled computer programme. Overall I would recommend this as a very good read and I have only knocked a star off as it is not complete in itself. When I've read the sequel then I might alter this review.
Read more
5 people found this helpful
Report abuse

ADP
1.0 out of 5 stars This is not a book
Reviewed in the United Kingdom on January 8, 2020
Verified Purchase
This is not a book, just the first part of a book. The plot line is poor and has holes in it like a piece of swiss cheese. Essentially the author paints a scene where the entire US intelligence community are idiots and intelligent people working in the defence industries are totally stupid. This novel is just silly.
Read more
3 people found this helpful
Report abuse

Timbo
1.0 out of 5 stars Not really a complete book
Reviewed in the United Kingdom on January 6, 2019
Verified Purchase
Whilst well written, as a whole this is a huge disappointment. It’s basically a cheaply priced first part of a story so you end up having to buy the rest of what would normally be one book. I am so annoyed by this that I am not going to buy any more out of principle. A shame really. If it had been transparently packaged and priced I would have been willing to buy it, but I reslly do not like this sort of approach.
Read more
One person found this helpful
Report abuse

DaveTT
4.0 out of 5 stars Not bad
Reviewed in the United Kingdom on September 29, 2016
Verified Purchase
I found the story a little slow, but not in a boring way, it just pulls you in like a giant whirlpool. There isn't much in the way of action but there is quite a bit of suspense, more Le Carre and not much Fleming.
Overall a reasonable read, and book 2 looks like more of the same.
Read more
One person found this helpful
Report abuse

Arvind A. Parmar
5.0 out of 5 stars This book is too real for comfort
Reviewed in the United Kingdom on January 7, 2019
Verified Purchase
wow only got the book by chance and was immersed into the story from the start. with the current situation between the USA and China, it's a very realistic nightmare. Gread read and have just started book two
Read more
Report abuse
See all reviews