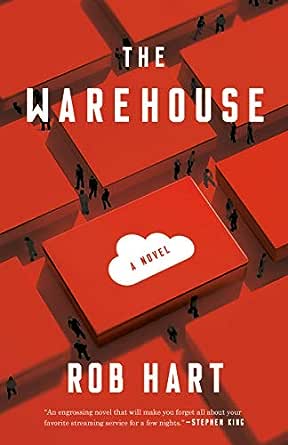 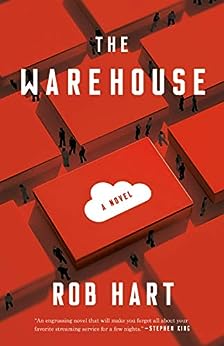 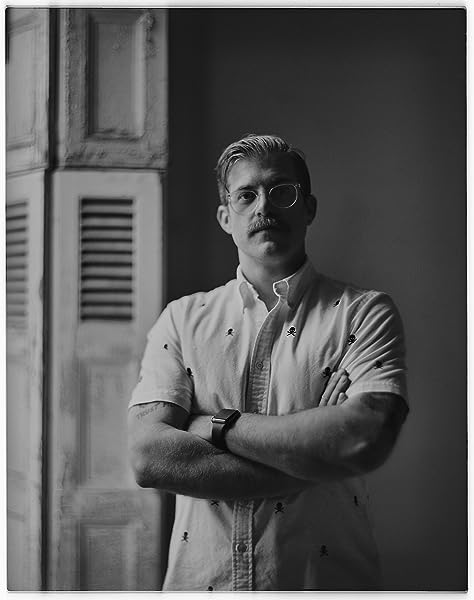 The Warehouse: A Novel Kindle Edition

“The Warehouse is a thriller of ideas, and its interplay of taut action and incisive cultural commentary gives it shades of Fahrenheit 451 and Jurassic Park.”—USA Today

“Futuristic thrillers such as 1984, Fahrenheit 451 and The Handmaid's Tale succeed because the plots harbor more than a few kernels of truth that make the stories believable. Add Rob Hart's whip-smart thriller The Warehouse to that oeuvre. The engrossing plot not only seems that it could happen, but also, in many ways, is happening now.”—Associated Press

“Featuring an explosive twist-in-the-tail climax, this terrifying hybrid of Orwell’s Nineteen Eighty-Four and Zamyatin’s We is a triumph.”—The Guardian (UK)

“Fires an exhilaratingly unsubtle broadside against a world where the wage gap is becoming a yawning chasm.”—Financial Times (UK)

“Thrilling . . . conjures a warped but recognizable near-future America that nails the dystopia-as-utopia aspect of our worst nightmares. Like the best dystopian fiction, The Warehouse holds up a dark mirror to our times.”—San Francisco Chronicle

“Taut, tense, and masterful. Every page presents a new set of chills that tells you in no uncertain terms: this is where we’re headed if we don’t correct our course.”—Chuck Wendig, New York Times bestselling author of Wanderers

“Fast-paced and unputdownable, thrilling and ominous . . . terrifying object lesson of a story that will haunt you each time yo se a box on the front step.”—Delilah S. Dawson, New York Times bestselling author of Star Wars: Phasma

“Witty, insightful, and masterfully told, The Warehouse is a riveting tale that reflects on the state of humanity and where we might be heading.”—Ashlee Vance, New York Times bestselling author Elon Musk

“A chilling and all-too-believable portrait of a not-so-far-off future where free will succumbs to big business.”—Alafair Burke, New York Times bestselling author of The Better Sister

“As a polemic, The Warehouse is full throated and sweeping. . . . [Hart’s villain] is the belief that brazen capitalism is the solution to the world’s problems.”—The New York Times Book Review

Paxton pressed his hand against the front window of the ice-cream parlor. The menu board on the wall inside promised homemade flavors. Graham cracker and chocolate marshmallow and peanut butter fudge.

Flanking it, on one side, was a hardware store called Pop’s, and on the other was a diner with a chrome and neon sign he couldn’t quite make out. Delia’s? Dahlia’s?

Paxton looked up and down the stretch of the main road. It was so easy to imagine the street bustling with people. All the life this place used to hold. It was the kind of town that could inspire feelings of nostalgia on the first visit.

Now it was an echo fading in the white sunlight.

He turned back to the ice-cream parlor, the only business on the strip not boarded up with weathered plywood. The window was hot to the touch where the sun hit it and coated in a layer of grit.

Looking inside, at the dusty stacks of flared tin cups and the empty stools and the fallow refrigerators, Paxton wanted to feel some kind of regret, about what this place must have meant to the town that surrounded it.

But he had reached the limit of his sadness when he stepped off the bus. Just the act of being there was stretching his skin to bursting, like an overfilled balloon.

Paxton hitched his bag over his shoulder and turned back into the horde shuffling down the sidewalk, trampling the grass jutting through the cracks in the concrete. There were still people coming up in the rear--older folks, people nursing injuries so they couldn’t walk as well.

Forty-seven people had gotten off the bus. Forty-seven people, not including him. About halfway through the two-hour ride, when there was nothing left on his phone to capture his attention, he’d counted. Heavy-shouldered men with the callused hands of day laborers. Stooped office workers grown soft from years of hunching at keyboards. One girl couldn’t have been more than seventeen. She was short and curvy, with long brown braids that reached down to her lower back and skin the color of milk. She wore an old lavender pantsuit, two sizes too big, the fabric faded and stretched from years of washing and wear. The sliver of an orange tag, like the kind used in secondhand stores, stuck out from its collar.

Everyone carried luggage. Battered roller suitcases wobbling on uneven pavement. Bags strapped to backs or slung over shoulders. Everyone sweating from exertion. The sun baked the top of Paxton’s head.

It must have been well past a hundred degrees. Sweat ran down Paxton’s legs, pooling in his underarms, making his clothes stick. Which was exactly why he wore black pants and a white shirt, so the sweat wouldn’t show as much. The white-haired man next to him, the one who looked like a college professor put out to pasture, his beige suit was the color of wet cardboard.

Hopefully the processing center was close. Hopefully it was cool. He just wanted to be inside. He could taste it on his tongue: dust blowing from ruined fields, no longer strong enough to keep a grip on anything. It had been cruel of the bus driver to drop them at the edge of town. He was probably staying close to the interstate to conserve gas, but still.

The line ahead shifted, drifting to the right at the intersection. Paxton dug in harder. He wanted to stop to pull a bottle of water out of his bag, but pausing at the ice-cream parlor had been an indulgence. There were now more people ahead of him than behind.

As he neared the corner, a woman launched past him, clipping his side, making enough contact he almost stumbled. She was older, Asian, with a mop of white hair on her head and a leather satchel looped around her shoulder, making a hard push for the front of the pack. But the effort proved to be too much and within a couple of feet she tripped, went down hard on her knee.

The people around her stepped to the side, gave her room, but didn’t stop. Paxton knew why. A little voice in his head screamed, Keep walking, but of course he couldn’t, so he helped her get to her feet. Her bare knee was scratched red, a long trail of blood running down her leg to her tennis shoe, so thick the line was black.

She looked at him, barely nodded, and took off. Paxton sighed.

“You’re welcome,” he said, not loud enough for her to hear.

He checked behind him. The people at the back were picking up the pace. Walking with a renewed sense of effort, probably at the sight of someone going down to the ground. There was blood in the air. Paxton hitched the bag again and took off at a brisk pace, aiming hard for that corner. He turned and found a large theater with a white marquee. The stucco on the front of the building was crumbling to reveal patches of weather-worn brick.

Broken neon glass letters formed an uneven pattern along the top of the marquee.

Paxton figured it was supposed to spell out Riverview, even though there didn’t seem to be any rivers nearby, but then again, maybe there used to be. Parked outside the theater was a mobile air-conditioning unit, the sleek vehicle humming, pumping cold air through a sealed tube into the building. Paxton followed the crowd toward the long row of open doors. As he got closer, the doors on the end closed, leaving a few in the middle still open.

He pushed forward, nearly running the final few steps, aiming for the middle. As he stepped through, more doors slammed behind him. The sun disappeared and the cool air enveloped him and it felt like a kiss.

He shivered, looked back. Saw the last door close, and a middle-aged man with a pronounced limp was left out in the blazing sun. The first thing the man did was deflate. Shoulders slumped, bag dropped to the ground. Then the tension returned to his spine and he stepped forward, smacking his palm against the door. He must have been wearing a ring because it made a sharp crack, like the glass might break.

A man in a gray shirt that said RapidHire on the back in white letters approached the rejected applicant. He placed a hand on the man’s shoulder. Paxton couldn’t read lips, but he assumed it was the same thing spoken to the woman who’d gotten turned away from the bus. She was the last person on line and the doors closed in her face, and a man in a RapidHire shirt appeared and said: “There is no last place. You have to want to work at Cloud. You are free to apply again in one month’s time.”

Paxton turned away from the scene. He couldn’t find more room for his own sadness--certainly he couldn’t muster space for anyone else’s.

Rob Hart is the author of the Ash McKenna crime series and the short-story collection Take-Out. He also co-wrote Scott Free with James Patterson. He's worked as a book publisher, a political reporter, and a communications director for a politician and was a commissioner for the city of New York. He lives on Staten Island with his wife and daughter. --This text refers to the library edition.
Read more